Accessibility links
For Wall Street Protests, What Constitutes Success? The Occupy Wall Street movement has spread across the country and put income inequality on the political agenda. But the process of converting this expression of dissatisfaction into real policy changes is going to take a long time. 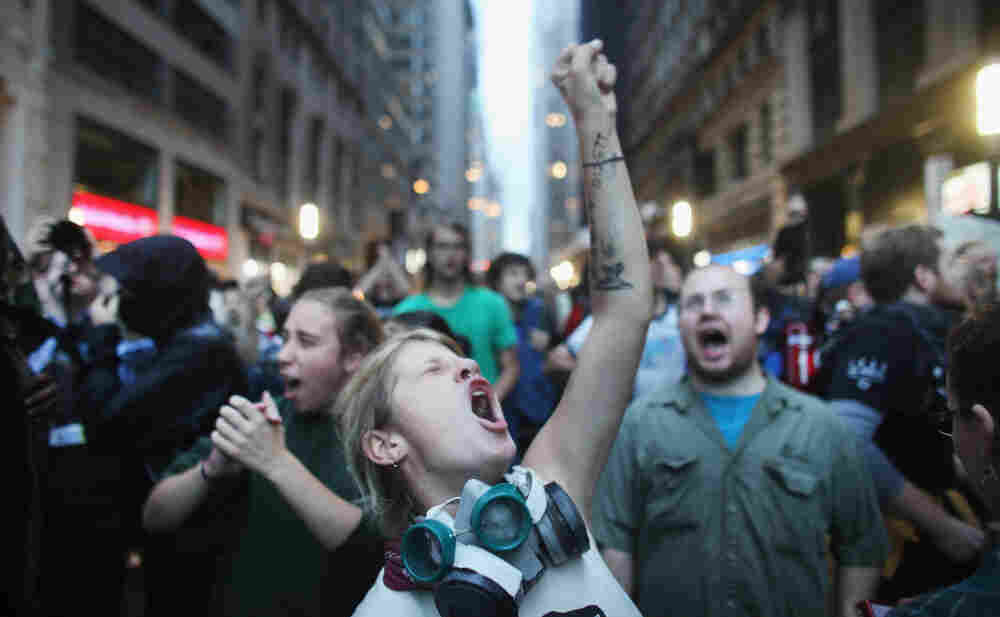 Demonstrators associated with the Occupy Wall Street movement face off with police Friday in the streets of New York City's financial district. 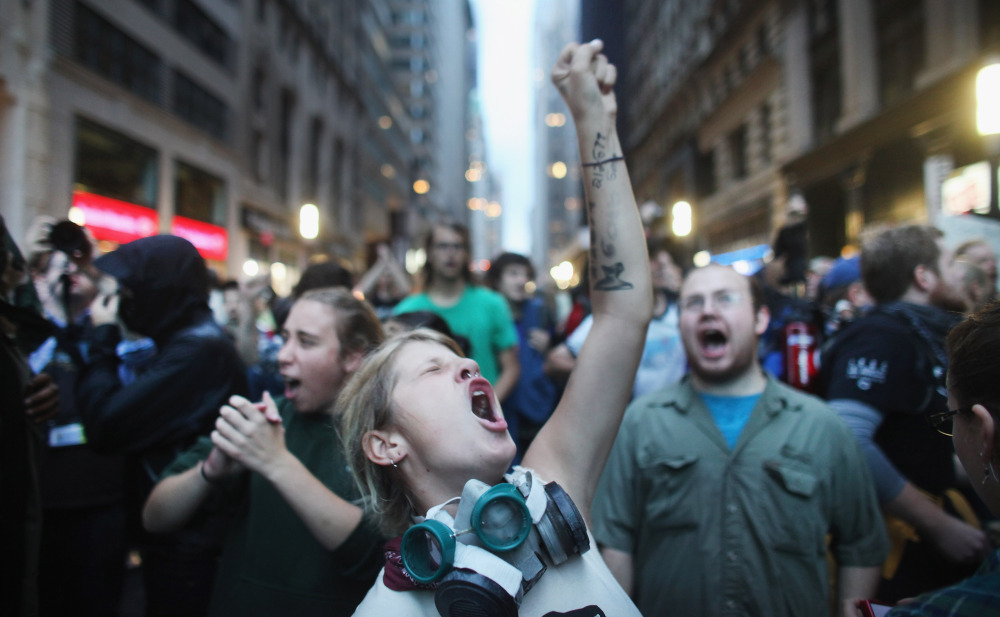 Demonstrators associated with the Occupy Wall Street movement face off with police Friday in the streets of New York City's financial district.

Wall Street protesters avoided a showdown Friday that could have forced them from their Manhattan camp, but they still face the same question that would have confronted them if they had been evicted: Where do they go from here?

The Occupy Wall Street movement has been more successful than even its own organizers would have predicted when they began nearly a month ago. The New York City protest has shown staying power, garnered considerable media attention and inspired satellite protests in more than 100 cities nationwide.

Movements don't write legislation. They force open a line of questions that makes it possible for people to imagine new policies. That's always the first step.

Demonstrators have been criticized, largely by conservative politicians and pundits, for questioning institutions — mainly the financial industry and the very wealthy — that loom large in American society. Even sympathetic observers wonder whether the protesters can convert their message of unhappiness about income inequality into policies that actually lead to change.

"The first step of these things is to mobilize community and energy, but at some point that energy and strong feelings have to be focused on what you can actually do to change what it is they don't like," says Robert Thompson, a professor of popular culture at Syracuse University.

Eventually, the protesters will have to build alliances with politicians and institutional forces that, in these early days, they have sometimes spurned. But it's premature to expect them to have a clear agenda at this point, say scholars who have studied past protest movements.

"What starts these movements is a list of grievances," says Rosemary Feurer, a historian at Northern Illinois University. "You don't start with a list of goals, but with a sense of what's wrong."

That's what happened in the past, Feurer says. The populist movements of the 19th century and the early union movement began in a similar fashion: An encampment of people came together, found they shared a sense of dissatisfaction with the status quo and worked to change it.

Figuring out how best to express those complaints — and what action to take — always takes time.

A selected list of past American protest movements that had a lasting impact. 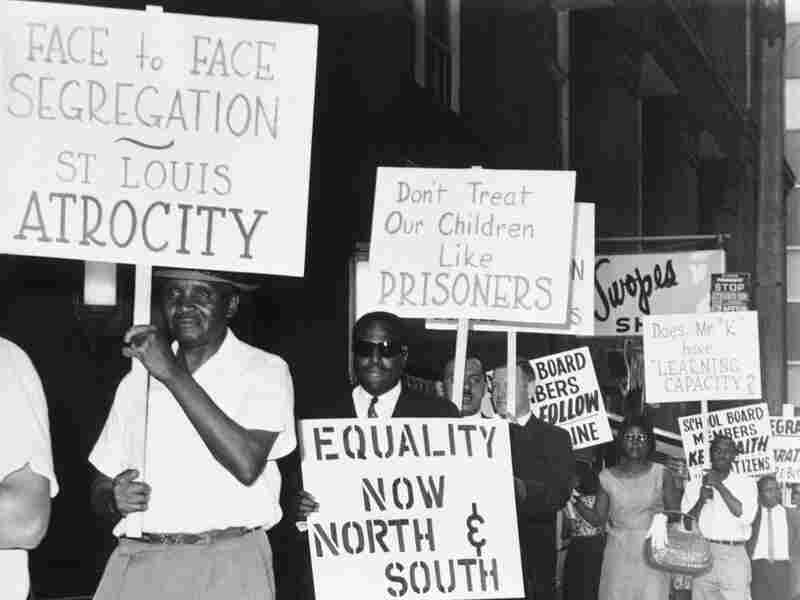 Civil rights groups picketed a meeting of the board of education in downtown St. Louis in June 1963 to protest integration policies in public schools.

Abolitionism: Nineteenth-century demands for an end to slavery helped bring about the Civil War and emancipation.

Populism: Farmers and other working people pushed an early "anti-Wall Street" agenda that worked to break up monopoly power.

Unions: The labor movement of the 19th and early 20th centuries gave rise to strikes and proposals such as an eight-hour work day.

Bonus Army: A 1932 encampment in Washington, D.C., of World War I veterans seeking payment for military service; symbolic of the revived labor movement of the 1930s.

Vietnam: The war inspired mass protests on campuses and elsewhere in the 1960s and 1970s.

Tea Party: The conservative movement coalesced around anti-government feelings beginning in 2009 and quickly became influential with the Republican Party.

"The practical matter here is that where there will be actual, let's say, specific policy requests we'll be working toward, those have to come out of a discussion of the group that is organic and consensus-driven," says Ed Needham, a media spokesman for Occupy Wall Street.

"We're doing our best to define who we are at the moment," he says. "Once we are able to do that, we can do things on the policy front."

If the Wall Street and other Occupy protests are going to lead to real change, activists will have to adopt both an "outside" and an "inside" strategy, says Michael Kazin, a historian at Georgetown University.

They need to keep pushing from outside the normal political channels, but they also have to learn how to work inside those channels, whether by helping create new institutions with a clear agenda that reflects their goals or, more likely, by working hand-in-glove with existing institutions.

It may take awhile to articulate an actual five-point plan that leads to, say, a greater distribution of wealth. And if history is any guide, such a plan may not come out of the protest movement directly, but from politicians responding to it.

"The concrete success, the actual reforms or changes in the system that result from something like this, don't come from the protest movements themselves," says Ruy Teixeira, a senior fellow with the Center for American Progress, a liberal think tank in Washington, D.C.

Already, Occupy Wall Street has won support from important institutions on the left such as the AFL-CIO, which urged members to mobilize to prevent protesters from being ousted from Zuccotti Park. But the movement has puzzled political observers by seeming to turn away other forms of help.

When Rep. John Lewis showed up last week to address the crowd at the Occupy Atlanta site, protesters praised the Georgia Democrat for his work in politics and civil rights but successfully argued that he shouldn't be allowed to bump the group's "agenda" in order to speak right away.

Lewis, who had other obligations, decided to leave, though he said he took no offense. Recalling his own days as head of the Student Nonviolent Coordinating Committee in the 1960s, he said civil rights groups sometimes reached consensus slowly and refused to be deferential to more established leaders.

"It is growing, it is maturing, it will work out," Lewis told reporters at the scene. "It will come of age."

It may, at any rate, be premature for Occupy Wall Street to join hands with politicians, according to Feurer, the Northern Illinois historian. "The movement has to grow before it can be politically effective," she says.

The protests, however sustained and widespread, are not yet large enough to amount to a real reflection of public opinion.

But the mere fact that more people are talking about income inequality and the growing share of wealth controlled by the nation's richest 1 percent represents a type of victory, says Nina Eliasoph, a sociologist at the University of Southern California.

"Movements don't write legislation," she says. "They force open a line of questions that makes it possible for people to imagine new policies. That's always the first step."

When protests appear to be successful and express important ideas, some people will want to sustain them by moving past street theater toward affecting actual policy changes, says Kazin, the Georgetown historian and author of American Dreamers: How the Left Changed a Nation.

"This always happens with protests that get large. People say, 'This is wonderful and I want to do something with this,' and they become professional activists of one form or another," Kazin says. "Believe it or not, you end up having organizations."