Accessibility links
Cain Says He's Not Just A Flavor Of The Week The former CEO of Godfather's Pizza has risen to the top of the pack in the GOP presidential race. Herman Cain says the substance of his ideas — including his 9-9-9 tax plan — is propelling his surge. But analysts say he doesn't have the field organization that a winning candidate typically has. 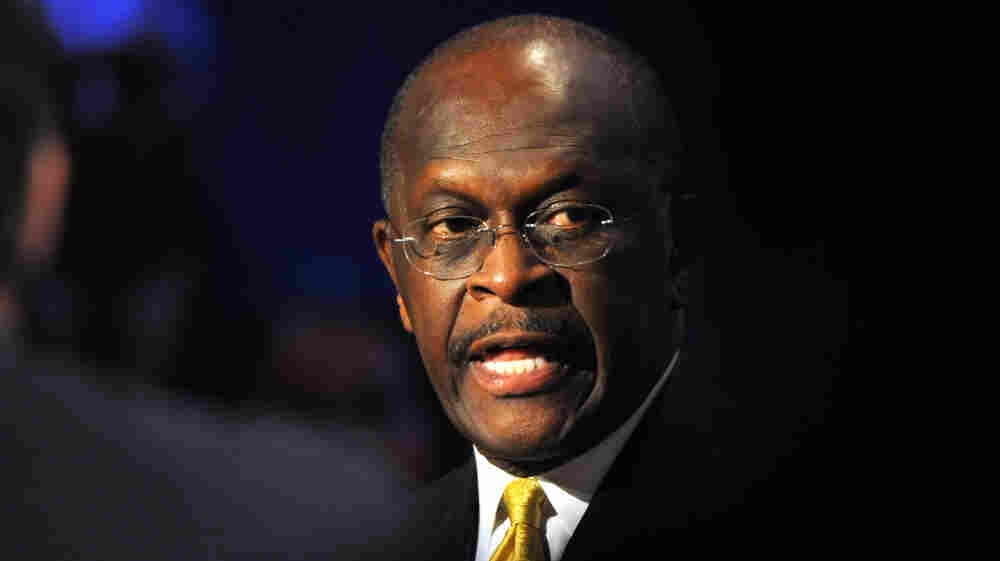 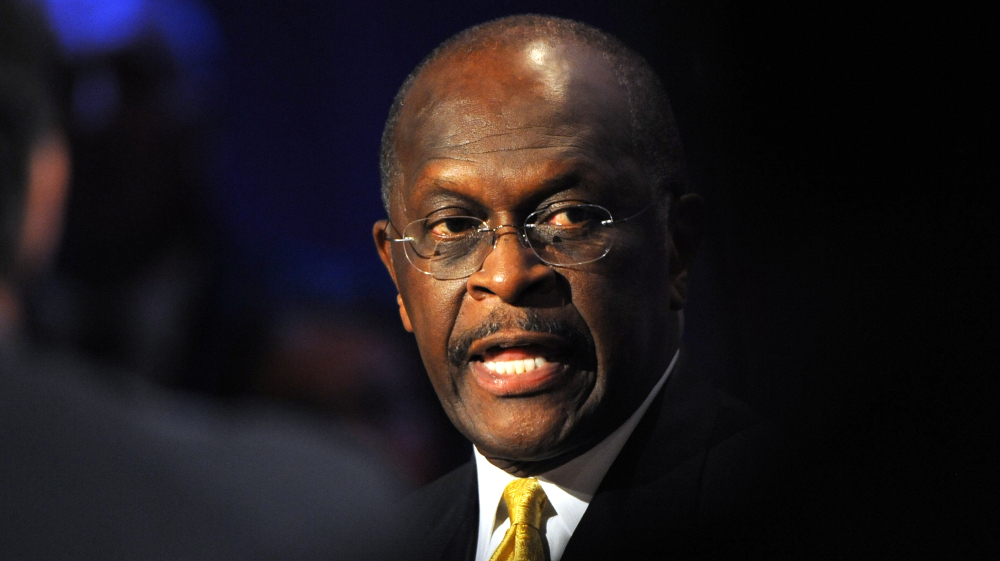 The former CEO of Godfather's Pizza has surprised a lot of people by rising to the top of the pack in the race for the Republican presidential nomination. Herman Cain hasn't been traveling to many pancake breakfasts in Iowa or town halls in New Hampshire, but his polished speeches and debate performances have thrilled Republican voters.

A graph on the front page of the Wall Street Journal this week described the Republican race perfectly. A big "X" — one line heading down showed Texas Gov. Rick Perry collapsing; the other diagonal, heading up, showed Cain surging. A flat, horizontal line running right through the middle was former Massachusetts Gov. Mitt Romney's steady but unmoving support, stuck at 23 percent.

Cain told NPR's Scott Simon this week that his rise was not a case of being the flavor of the week.

"If you look at what has allowed me to surge, it is because of the substance and the ideas and the specific solutions that I have put on the table," he said.

Cain is polished and folksy, and he has a slogan-ready economic platform — he calls it the 9-9-9 plan. That's a 9 percent income tax rate, a 9 percent corporate tax rate and a 9 percent national sales tax.

"It is a bold solution to a crisis we have called this economy. It starts with throwing out the old tax code and putting in this very simple, transparent, efficient, spare, revenue-neutral plan that's appealing to the American public," he said. "So I think it's the specificity of my ideas, the boldness of my ideas, which is allowing me to surge with people who are finding out who Herman Cain is."

Right now, the consensus view is that Cain is a gifted communicator but not a real contender for the nomination, says Brookings Institution political analyst Darrell West.

To quote one of my supporters, 'President Obama might raise a billion dollars to try to get re-elected, but the people of this country are going to raise some Cain.'

"He's done very well in debates. He gives a very strong speech. He makes a good, positive first impression," West says. "But he doesn't have all the other stuff — you know, the get-out-the-vote effort on the ground, the field organization — that typically a winning candidate has."

Cain hasn't even spent much time campaigning in the early states. And although Cain says his fundraising has gone up 20-fold, he still has only several hundred thousand dollars in cash on hand. But Cain says that's not a problem.

"To quote one of my supporters, 'President Obama might raise a billion dollars to try to get re-elected, but the people of this country are going to raise some Cain,' " he said.

For Romney, A Foil And A Buffer

In the New Hampshire debate sponsored by Bloomberg and The Washington Post on Tuesday, Cain functioned as a foil for Romney. At one point, Cain got the opportunity to ask a question.

Romney replied: "Herman, I've had the experience in my life of taking on some tough problems. And I must admit that simple answers are always very helpful, but oftentimes inadequate."

Romney never bothered to take on the substance of the 9-9-9 plan. That's because Cain is not a real threat to Romney, West says.

"The more that the conservative part of the field remains divided among several different candidates, the better off Mitt Romney is," West says. "His worst-case scenario is a one-on-one fight with a conservative in that race. That's a race that he could lose. But the longer the field stays crowded, the better off he is because those people are going to divide the vote and allow him to become the nominee."

For now, Cain is serving as a helpful buffer between Romney and the other candidates, particularly Perry, who unlike Cain has the money for television ads and a field organization. It will take all of that and more to threaten Romney's path to the nomination.