Accessibility links
A View From The Bridge: Great Sorrows In Little Souls, American-Style Brooklyn verismo, courtesy of American composer William Bolcom: the trials of Italian immigrants — some of them illegal — in 1950s Red Hook.

A View From The Bridge: Great Sorrows In Little Souls, American-Style 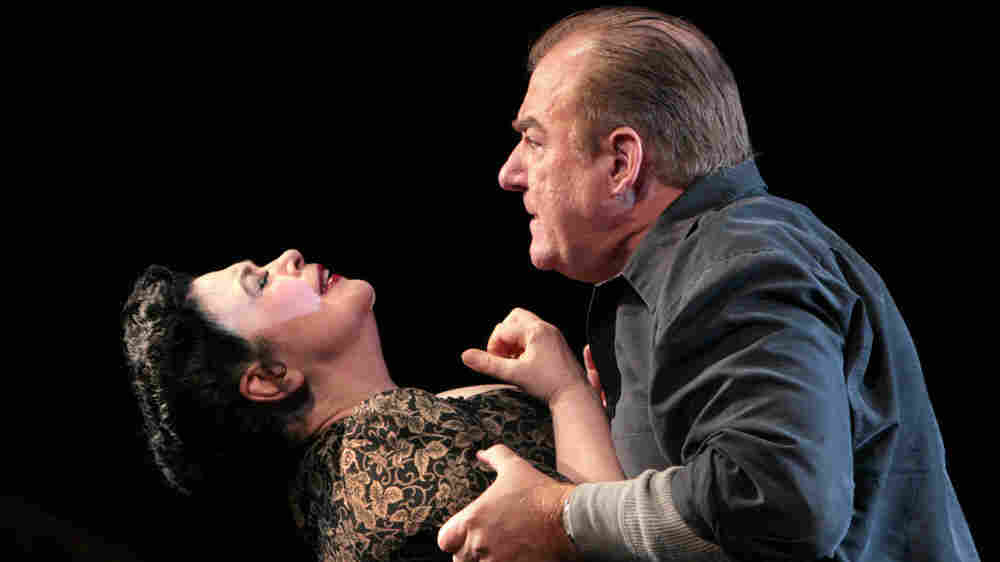 Catherine Malfitano as Beatrice and Kim Josephson as Eddie in William Bolcom's 'A View From The Bridge.' 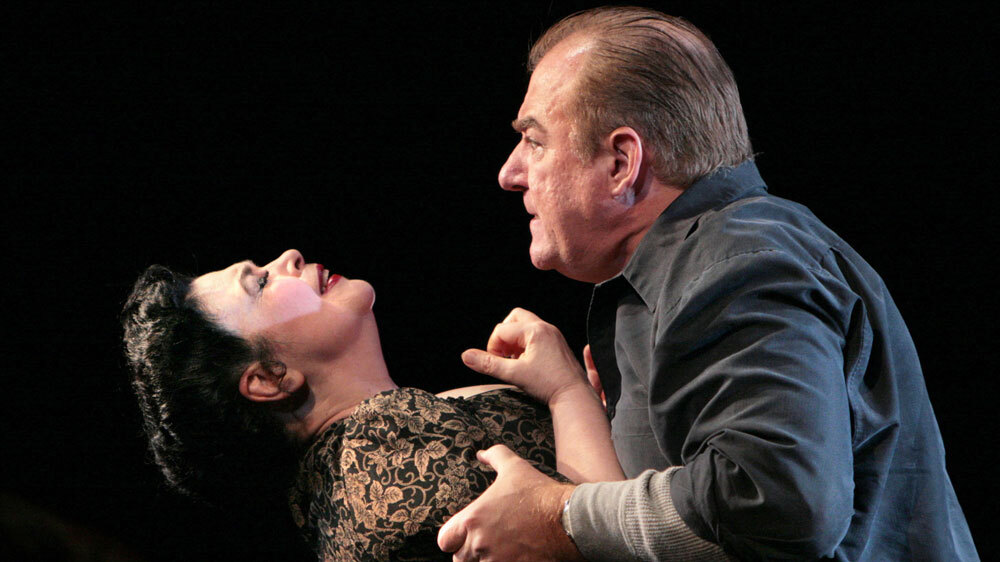 Catherine Malfitano as Beatrice and Kim Josephson as Eddie in William Bolcom's 'A View From The Bridge.'

In this soaring, meditative aria, Eddie's cousin Rodolfo says that though he loves Italy, there's only one place he wants to be: New York.

'I Love The Beauty Of The View At Home'

Beatrice advises Catherine that she is a grown woman, and should assert her independence from Eddie.

'Was There Ever Any Fella That He Liked For You?'

When William Bolcom's opera A View from the Bridge premiered in Chicago in 1999, one critic described it as "Brooklyn verismo," invoking the emotive style popularized by Italian composers such as Puccini. And that pretty much hits the nail on the head.

Bolcom's distinctively American opera is set among immigrants in New York, and its story easily lives up to Puccini's description of his own dramatic style, as one that puts "great sorrows in little souls."

The little souls of A View from the Bridge are struggling dock workers and their families, some of whom are in the country illegally. The opera is based on a 1955 play by Arthur Miller, which appeared first as a one-act drama in verse, and then as a full-length, two-act show on Broadway. Miller worked on the opera's libretto alongside Bolcom's longtime collaborator, Arnold Weinstein, and they relied on both versions of the play in creating the opera's text.

The opera's vibrant setting is the Italian-American neighborhood of Red Hook, in Brooklyn, back in the 1950s. But the issues underlying the story seem both ancient and cut from modern headlines — ranging from the travails of illegal immigrants to ethnic stereotypes to biases surrounding sexual orientation and even the hint of incest.

Placido Domingo, general director of the Washington National Opera, discusses Bolcom's 'A View From The Bridge,' and his own devotion to presenting American opera in the nation's capital.

Domingo On 'A View From The Bridge'

Placido Domingo, the Washington National Opera's general director, has maintained a long and steady commitment to the presentation of American opera in the nation's capital. That commitment has led to a number of highly successful productions that have also been heard on World of Opera with host Lisa Simeone, including Gershwin's Porgy and Bess, Barber's Vanessa, Previn's A Streetcar Named Desire and now, A View from the Bridge. Among its stars are three singers who created their roles in the opera's Chicago world premiere: Catherine Malfitano as Beatrice, Kim Josephson as Eddie and Gregory Turay as Rodolfo.

The Story Of 'A View From The Bridge' 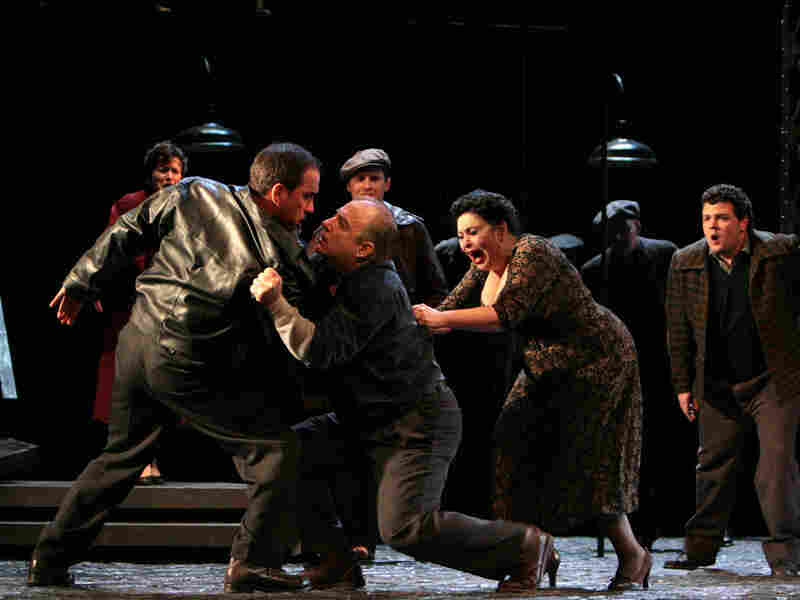 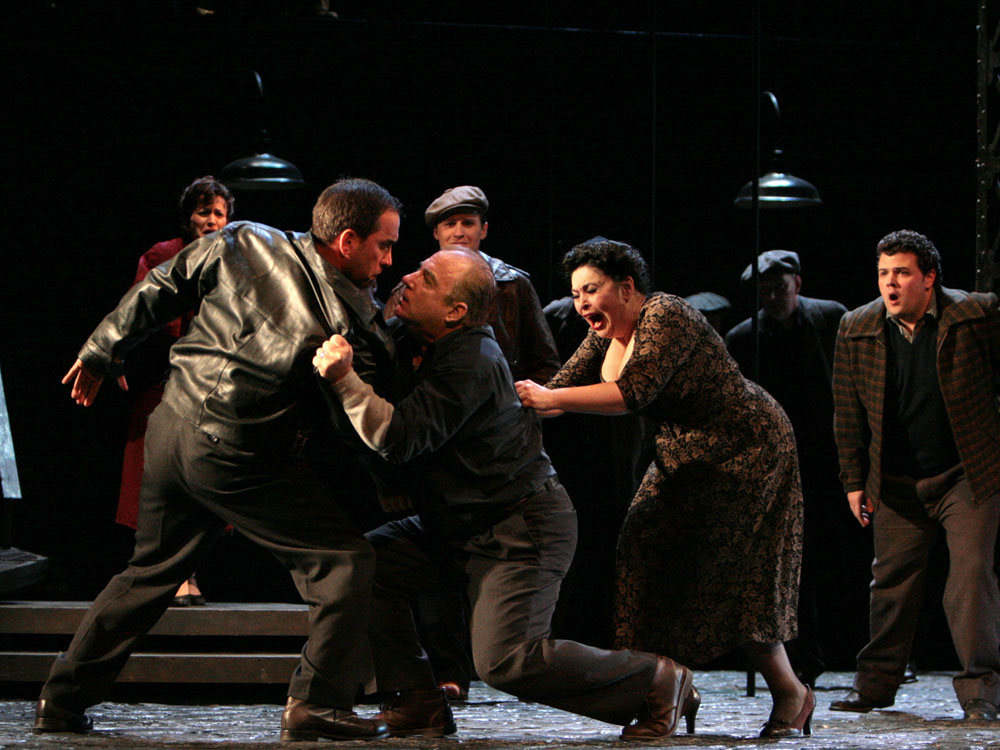 As Act One opens, we meet Alfieri — a lawyer who begins to tell the story that's about to be played out. As the drama unfolds, he returns, both as a participant and as a kind of impartial commenator. Often, Alfieri is joined by a chorus, which serves a role similar to that of choruses in classic Greek dramas. Its members don't play a direct part in the action. Instead, the chorus as a whole provides a sort of moral compass; it represents the tight-knit community that surrounds the main characters, observing and evaluating their behavior, and pronouncing judgments that are difficult to escape.

Alfieri introduces both the story and one of its major players, Eddie Carbone. Eddie is a dock worker, and he's been expecting two of his wife's Italian cousins to arrive on an inbound ship as illegal immigrants, known in Red Hook as "submarines." His friends Louie and Mike tell him that the cousins' ship will soon be in port, and that all the arrangements have been made. The two men will be brought to Eddie's house that evening.

Eddie arrives home and greets his wife, Beatrice, and their niece, Catherine. Eddie and Beatrice took Catherine in as a young child after the death of her mother, Beatrice's sister. Now, Catherine is a beautiful young woman. Eddie comments on how grown-up she looks, and seems to find that disturbing. He's more upset when he learns that Catherine has found a job as a stenographer with a plumbing company.

Eddie then announces that Beatrice's cousins will be arriving that evening. He says that they must all be careful not to tip off the authorities that illegal immigrants are living with them. The chorus also chimes in, recalling the story of a young man who informed on an immigrant uncle and was brutally denounced by the Red Hook community.

The cousins soon arrive. One is Marco, who has come to America to earn money to send home to his wife and children, who are sick and going hungry. The other cousin is Marco's younger brother, Rodolfo, a handsome young man with blond hair — he says that a long-ago relative was Danish. Rodolfo also turns out to be an accomplished singer, which he demonstrates with a fervent rendition of the Harry Warren song "Paper Doll."

The scene changes, and several weeks have passed. Marco and Rodolfo have been working on the docks. Rodolfo has also been spending a lot of time with Catherine, which clearly bothers Eddie.

Beatrice also has worries. She fears that the love has gone out of her marriage, and sings an aria asking Eddie, "When will I be a wife again?"

One night, as Eddie is returning late from work, he's annoyed that his friends seem to enjoy working with the Italian cousins — especially Rodolfo, whom Eddie suspects is "not right." Eddie is even more upset when Rodolfo and Catherine arrive home from a late night at the movies. Rodolfo says that their evening has been totally innocent, and sings about his love for New York City in an aria called "New York Lights."

Eddie sends the young man inside and tells Catherine that Rodolfo is a "hit-and-run guy," only interested in her as a way to gain citizenship. Eddie leaves angrily, and Beatrice takes Catherine aside for some advice about her uncle — reminding Catherine that she's a "grown woman now, living in a house with a grown man."

As Eddie becomes more and more concerned about Catherine and Rodolfo, he consults the lawyer Alfieri — and subtly questions Rodolfo's sexuality. Alfieri says that there's no legal way to keep the two young people apart. Except, that is, by telling the authorities about Marco and Rodolfo, which is unacceptable in Red Hook. Alfieri advises Eddie to let Catherine go. Also, suspecting that Eddie's feelings about his niece are questionable, Alfieri warns him that "there are some kinds of love that must not grow."

Back at home, Eddie remains angry about Catherine and Rodolfo. Catherine defiantly puts on a record of "Paper Doll," and the young couple begin to dance. Eddie ridicules Rodolfo's skill at cooking and sewing. Then, he goads Rodolfo into a "boxing lesson," knocking him down in the process.

At that, Marco has had enough. He brings out a kitchen chair and asks Eddie if he's strong enough to lift it by a single leg, from the bottom. Eddie says sure, but barely gets it off the ground. Marco waves Eddie aside, then grabs the chair by the bottom of one leg and lifts it easily over his head, while the chorus sings warnings in the background.

Act Two begins with a brief scene at the docks, where Eddie is joking with his friends Mike, Louie and Tony. It's just before Christmas, and the four have broken into a case of whiskey to celebrate. Eddie is clearly drunk, and stumbles toward his house.

Back home, Beatrice has gone Christmas shopping, leaving Rodolfo and Catherine alone in the house for the first time. The two talk about getting married. Catherine is afraid of Eddie's reaction to that, and begs Rodolfo to take her to Italy so that they can get away from Eddie. Rodolfo tells her there is no work for them in Italy. They can stay in Brooklyn, he says, and move into a home of their own. He takes her in his arms, and they walk quietly into the bedroom.

Eddie arrives home, drunk, and calls for Beatrice, who is still gone. Catherine comes out of the bedroom, adjusting her dress, and is followed by Rodolfo. Eddie is furious, and tries to throw Rodolfo out of the house for good.

When Catherine tells him she'll be leaving, too, Eddie loses control. First, he grabs Catherine and drunkenly kisses her. When Rodolfo tries to intervene, Eddie seizes hold of him, pins him down on the table, and kisses Rodolfo full on the mouth. When he's released, Rodolfo falls to the floor, disgusted and humiliated. Eddie shouts, "He likes it!" — and tries to convince Catherine that he has just shown her the truth about Rodolfo.

The scene changes to the office of Alfieri, the lawyer. Eddie has told Alfieri what happened, and hopes that will provide a reason to prevent Catherine and Rodolfo from marrying. Alfieri tells Eddie that he hasn't proven anything about Rodolfo. With the chorus making dire observations in the background, Alfieri says that there is no legal way Eddie can stop his niece from being with Rodolfo.

Eddie implies that there is one way: He can call immigration authorities and inform on Marco and Rodolfo. Alfieri and the chorus warn him against that — Eddie would be betraying his community. But as Eddie leaves, he finds a phone booth, and the chorus denounces him as he makes the call.

When Eddie gets home, Beatrice tells him that Catherine and Rodolfo have left. They've rented a room in another apartment, upstairs. She tells him that the two plan to marry as soon as possible to make Rodolfo a legal citizen.

When Catherine comes downstairs, Beatrice tries to broker a truce, but there's a confrontation. Catherine refuses to hear anything Eddie has to say. As she leaves, she asks Beatrice for some pillows, for two more illegal immigrants who have just arrived and are staying upstairs.

Knowing that immigration officers are on the way, Eddie warns that the newcomers might attract the authorities. He says that all the immigrants should leave immediately, but it's too late. Officers come to the door, referring to a phone call they received. They search the house and seize the four men, including Marco and Rodolfo. As he's taken away, Marco accuses Eddie of betraying them — and the assembled chorus seems to know exactly what happened.

The scene changes to the jailhouse. Alone, Marco sings about "a ship called hunger" that brought him to America. Now, he says, it will take him back to Italy. But in the background, Catherine and Alfieri are arranging for the release of Marco and Rodolfo.

Back at Eddie's house, he is found in disgrace. The community has realized the truth — that he did betray the immigrants. Beatrice and Catherine are urging Eddie to put his anger aside and attend Catherine's wedding to Rodolfo. He refuses, saying he won't come unless Marco apologizes. "I want my name back," Eddie says.

Rodolfo enters, saying that Marco is on his way to confront Eddie. Eddie says that's fine: Marco can take back his accusation and restore Eddie's honor. Marco shows up outside, calling Eddie's name. When Eddie goes out, they argue, and quickly begin fighting. Eddie pulls a switchblade, but Marco grabs Eddie's arm, turns the knife back on Eddie, and stabs him. Eddie dies in Beatrice's arms, with the knife still in his own hand.

The opera ends as Alfieri and the chorus reflect on Eddie's life, saying, "We mourn him... with a certain alarm."