A Tale Of Two Health Plans: Romney Versus Obama

A Tale Of Two Health Plans: Romney Versus Obama 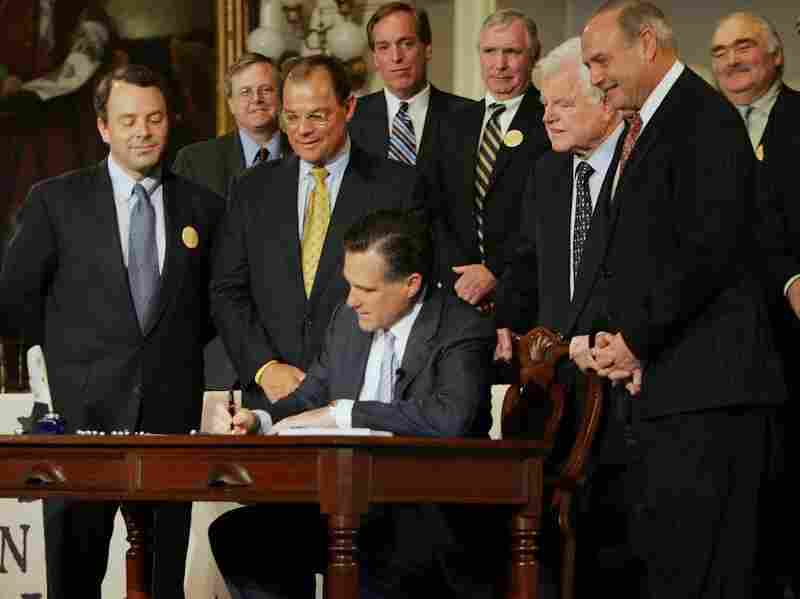 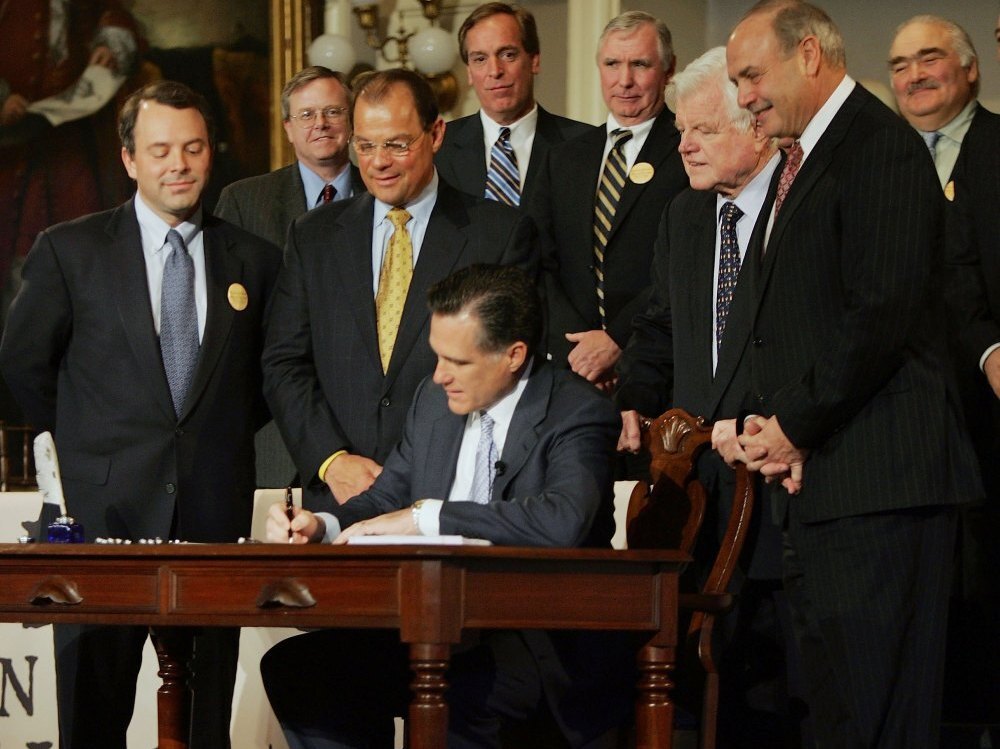 Former Massachusetts Gov. Mitt Romney appears to be headed into the 2012 GOP presidential primary season as the consistent, if not overwhelming, favorite for his party's nomination.

But there remains great discomfort among a wide swath of party members over the striking similarity of the Massachusetts health care reform legislation Romney signed in 2006 as governor, and the federal health care overhaul President Obama put his signature on last year. 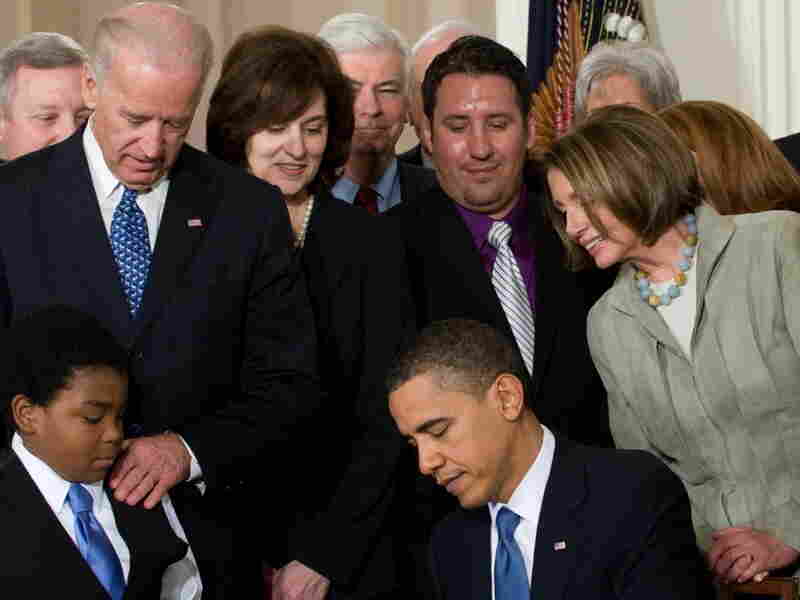 President Obama, surrounded by lawmakers and guests, signs health care insurance legislation during a ceremony in the East Room of the White House on March 23, 2010.

While Romney has alternately distanced himself from and taken credit for the Bay State law, his role in what former opponent Tim Pawlenty called "Obamneycare" could be a major obstacle to winning the GOP nomination.

The Massachusetts plan includes the requirement that individuals purchase insurance — which is also the most controversial aspect of the federal legislation. Legal challenges to its constitutionality are expected to ultimately be decided by the U.S. Supreme Court.

According to research from PolitiFact and the Kaiser Family Foundation, here are five other ways the two plans are similar — and five ways they are different.

Health Adviser To Romney And Obama Speaks Out

As Mitt Romney's opponents continue to compare "Romneycare" unfavorably with "Obamacare," we decided to take another look at the plans' similarities and differences. For additional insight, we turned to John McDonough, director of Harvard's Center for Public Health Leadership.

McDonough brings a unique perspective to the issue. He served as a top adviser on the national health care overhaul plan, and played a key role in advancing and implementing the Massachusetts law. His new book, Inside National Health Reform, details the effort that led to the national overhaul, including his work on the issue with Massachusetts Sen. Edward Kennedy, who died in 2009.

NPR's Liz Halloran: The major element of both plans is the requirement that individuals purchase health insurance, the so-called individual mandate. What are the bottom-line similarities and differences in the Massachusetts mandate and the mandate included in the federal legislation?

There are four key pillars of the Massachusetts plan that are all included in the ACA: insurance market reforms, the individual responsibility mandate, the premium and cost-sharing subsidies to low- and moderate-income households, and the exchange — known as the "connector" in Massachusetts. Though each of the four is done differently in both plans, the essential architecture is the same. And there is no doubt that the inspiration for Title 1 came from the folks in D.C. learning from the Massachusetts experience.

Of the four, the mandate is perhaps the most similar, and it's not really a "mandate" in either law. It is a tax penalty, enforced by the respective federal or state tax collection entity, which is imposed on those who can afford to buy insurance and who do not do so. Both have religious exemptions, and neither is imposed on low-income uninsured persons. The dollar penalties vary, though not by a lot. Both are strikingly similar.

Halloran: Former Gov. Romney has said that, if elected, his first act as president would be to issue waivers to every single state, allowing them to opt out of requirements of the federal health care plan.

McDonough: He cannot do that. Romney says he will do it by using the state waiver authority in Section 1332 of the ACA. But that section does not permit the issuance of any state waiver until 2017 at the earliest. There is a bill proposing to move up that date to 2014, but even that would not allow Romney to do what he says he plans to do on day one in January 2013. He's either misinformed, or he thinks no one will notice the 2017 date. And he's wrong.

Halloran: What did you learn in helping craft the Massachusetts plan that you brought to the table when putting together the national plan?

McDonough: There were more lessons than you can shake a stick at, and far more than can be relayed here. Here are a few:

Halloran: How has the plan worked in Massachusetts, and how have residents and taxpayers there responded? I'm looking at the Harvard SPH/Boston Globe poll of 2009 that suggests 59 percent support the Massachusetts universal health insurance law, and nearly 80 percent say the law should be continued, either as it stands or with some changes.

McDonough: An Urban Institute survey pegs public support for the law between 66 and 69 percent. Opposition is low. The plan worked well to accomplish what was intended: to dramatically lower the number of uninsured in Massachusetts. It was not structured to solve the cost problem, which has not been solved, though the law has triggered the most robust cost-of-quality process in any state in the nation. It was not intended to solve workforce shortages, and it hasn't. Massachusetts still has the highest proportion of medical professionals of any state, and only 11 percent of the state's doctors think the law should be repealed. A business-supported state budget watchdog says the law increased the state budget by less than 1 percent — not a budget-buster at all.

Halloran: If you were advising Romney, how would you suggest he defend the Massachusetts plan?

McDonough: I would urge him to say: "I am proud that the law I signed did what it was intended to do. It has lowered the number of uninsured in Massachusetts so much that no other state is our peer. Massachusetts proved that this national shame of the uninsured does not have to be, and we can fix it without breaking the bank."

He could say that, while there is a lot in the national plan that he doesn't support — new taxes, the big hand of the federal government, the intrusion into state prerogatives — there is a lot in the law that he does support and would not want to repeal. For example, there are provisions to combat violence, neglect and financial exploitation of our senior citizens. There is the Indian Health Reauthorization Act, more than 20 years in the making. There are breakthrough provisions to combat fraud and abuse in Medicare, Medicaid and private insurance. Suggest repeal of what he doesn't like, but say he won't throw the baby out with the bathwater.

An Adviser To Both Plans Explains The Differences Oct. 17, 2011