Accessibility links
Cryotherapy: Why Pro Athletes Like It Chilly Elite athletes are turning to a cool new therapy to refresh exhausted muscles. The concept is similar to an ice bath, but the benefits, many athletes say, are far better. 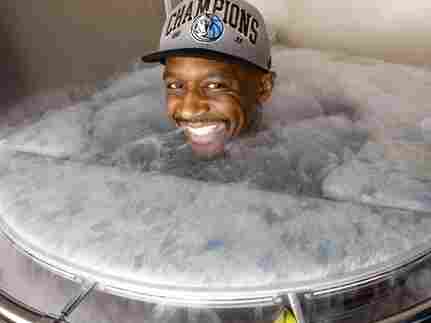 Dallas Mavericks shooting guard Jason Terry inside of a cryotherapy chamber at Millennium Ice in Dallas. 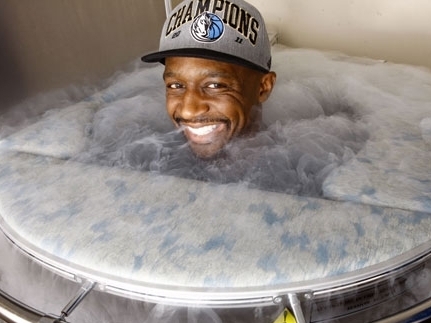 Dallas Mavericks shooting guard Jason Terry inside of a cryotherapy chamber at Millennium Ice in Dallas.

The traditional ice bath isn't so cool anymore. These days, professional athletes are opting for a treatment that sounds more like sci-fi torture: whole-body cryotherapy.

Here's how it works: You stand in a cylindrical chamber for about two and a half minutes. Hyper-cold air is released all around your body, bringing the temperature down to as low as 300 degrees below zero.

It's a similar concept to an ice bath, but the benefits, many athletes say, are far better. Texas Rangers' pitcher C.J. Wilson is a regular, and several members of the Dallas Mavericks credit this year's NBA Championship win in part to their cryotherapy treatments. One athlete compared it to standing in a giant Red Bull can with your head poking out.

But the results are still largely anecdotal. Doug Casa, a kinesiology professor at the University of Connecticut, tells weekends on All Things Considered guest host Rebecca Roberts he doesn't see much of a difference between cryotherapy chambers and the traditional ice bath.

Eric Rauscher disagrees. He's the managing director of Millennium Ice, a company that manufactures whole-body cryotherapy chambers in the U.S.

When the blood is in the core, Rauscher says, it picks up oxygen and nutrients, since the body "feels like it's in massive distress."

At the end of the 2.5-minute session, the brain figures out where to send the blood first.

In the case of the Dallas Mavericks players, he says, fatigued leg muscles were getting oxygen-rich blood. "They were stepping out of the device essentially with instant recovery effects."

Rauscher has tried cryotherapy himself. He says he's been using it every other day over the course of a month. "Although it's cold, it's not that excruciating cold that an ice bath feels like."

Track star Justin Gatlin allegedly got frostbite on his leg from a treatment. Rauscher blames that on Gatlin for wearing wet socks.

"Obviously, if you're going to step in a device with wet socks, you're going to do some damage," he says. "But even then with Justin, what happened was a little bit of a blistering effect, no frostbite or any permanent damage."

The device doesn't have much peer-reviewed research in the United States. Rauscher says his own company spent months monitoring athletes and looking for the placebo effect.

"Every single athlete that we worked with told us that it produced a change, it produced a recovery like they hadn't felt," Rauscher says. "You'll see this in training rooms around the country."