Accessibility links
In Michigan, Obama Drives Home Free Trade Deal The president toured a General Motors plant with South Korea's leader Friday in Michigan and spoke to workers about the new agreement. The two leaders tried to address a concern by some that the deal will cause the U.S. to lose manufacturing jobs to overseas workers. 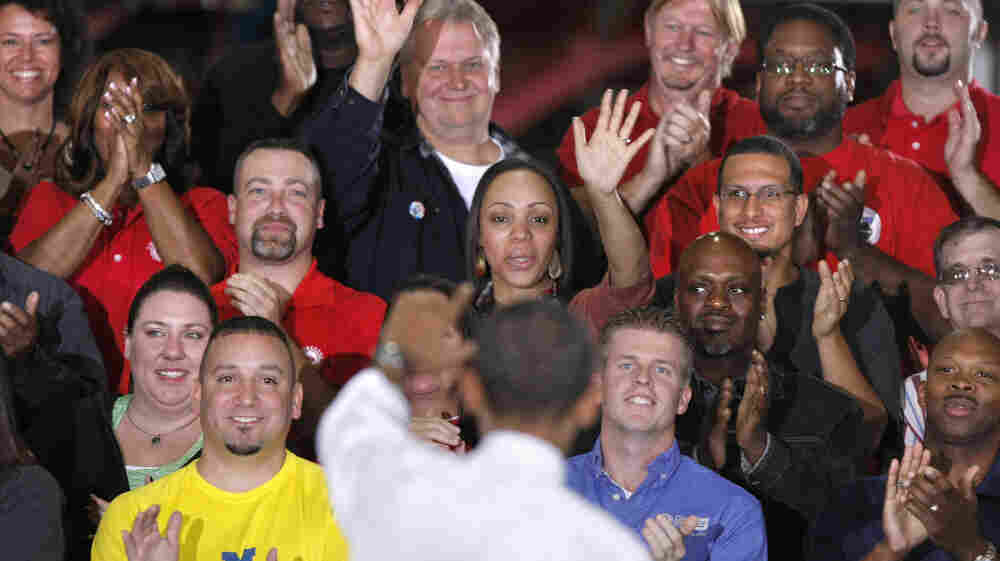 President Obama waves to the crowd after speaking at a GM plant Friday in Michigan. Obama and South Korean President Lee Myung-bak visited the plant to promote a free trade agreement. 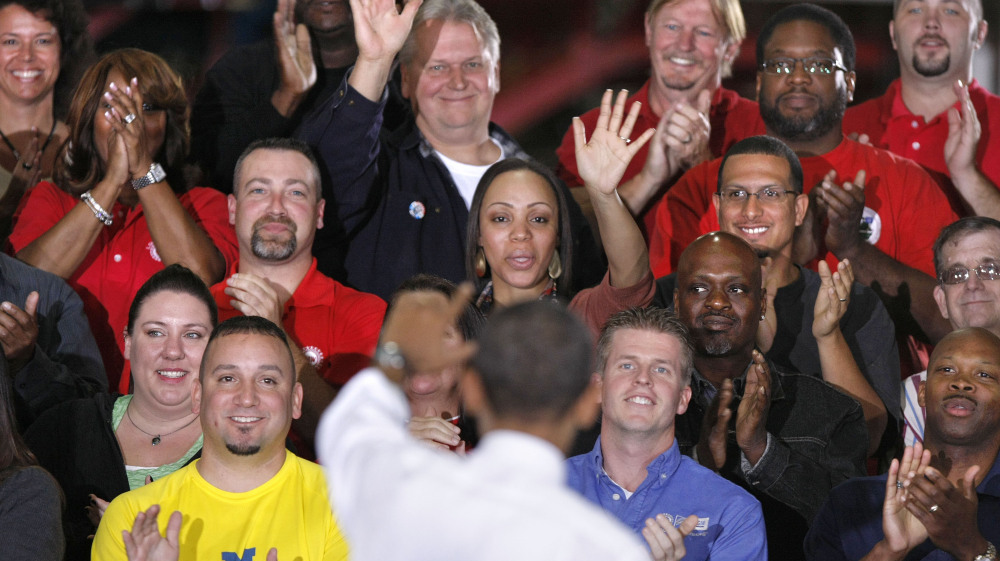 President Obama waves to the crowd after speaking at a GM plant Friday in Michigan. Obama and South Korean President Lee Myung-bak visited the plant to promote a free trade agreement.

Over the last few years, during factory tours across the country, Obama has driven an electric vehicle and coerced a New York Times reporter aboard a high-tech scooter.

So it was a safe bet that when he and South Korean President Lee Myung-bak found a brand new subcompact Chevy Sonic car on their tour of a General Motors plant, the two world leaders would climb in.

They toured the Michigan plant Friday and spoke to workers there about the new free trade deal between their two countries. They tried to address concerns that the agreement would cause the U.S. to lose manufacturing jobs to overseas workers.

The car they sat in is made in the U.S. with some parts from South Korea. The image of the two world leaders sitting side-by-side in the vehicle was a pretty good metaphor for what Obama believes will come out of this trade deal between the two countries.

"The good thing is we've got a balanced situation. It's not just a matter of folks sending a bunch of stuff here," Obama said. "Koreans are also buying American products. That's what makes it a win-win." 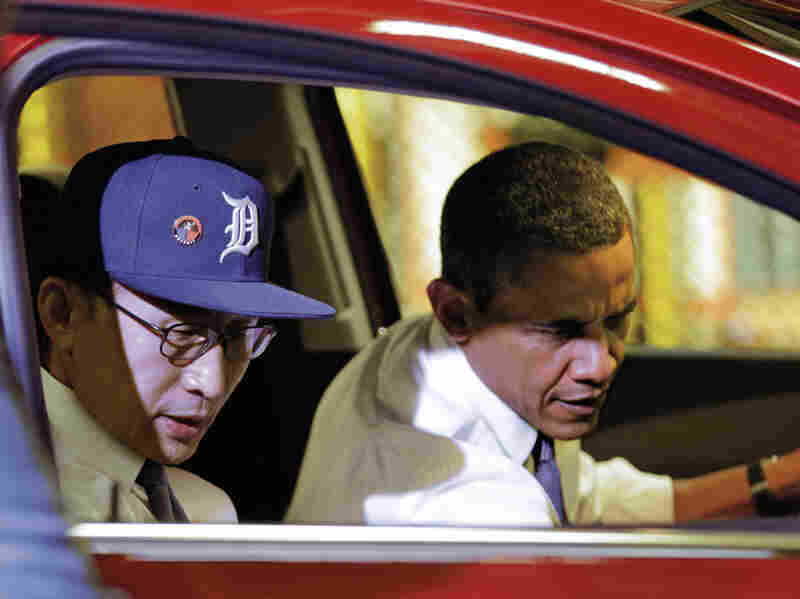 President Obama and South Korean President Lee Myung-bak, wearing a Detroit Tigers baseball cap, check out the interior of the subcompact Chevrolet Sonic during their tour. 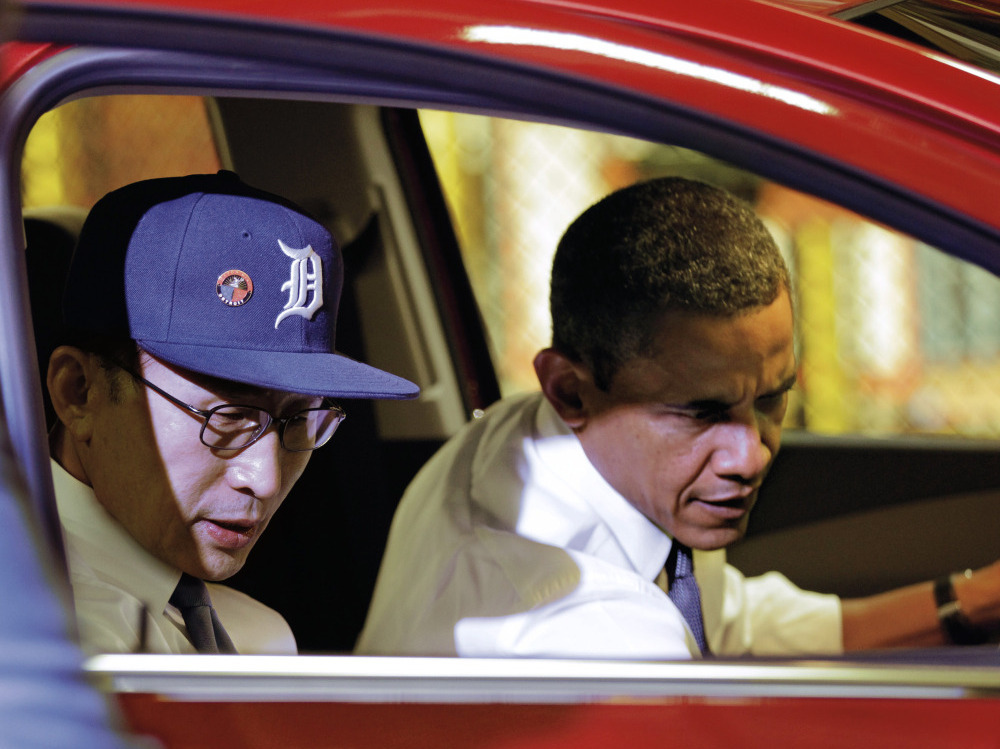 President Obama and South Korean President Lee Myung-bak, wearing a Detroit Tigers baseball cap, check out the interior of the subcompact Chevrolet Sonic during their tour.

Lee recognized that the deal has some skeptics. Especially in Rust Belt states like Michigan, manufacturing jobs have vanished overseas through free trade.

Lee said through a translator that won't be the outcome of this deal.

"Rather, it will create more jobs for you and your family, and it is going to protect your jobs, and this is the pledge that I give you today," he said.

That line received a standing ovation.

Auto workers and their unions are generally happy with this trade deal. Other workers' groups object.

On the trade votes this week, Obama lost nearly all of Michigan's Democrats. He says they ought not to worry because he insisted that the deal come with provisions to retrain workers who lose their jobs to foreign trade.

Further, he says, he was not willing to settle for the deal that he inherited from President George W. Bush — the new administration insisted on renegotiating.

"It was like a scene from a GM dealership," he said, "where folks are negotiating about the heated seats and the extended warranty, and you're going back and forth and trying to figure out, how does it fit together so that it works for everybody?"

Here in the Detroit area, Obama also defended one of his earliest decisions as president: to spend government bailout money on rescuing GM and Chrysler.

"Were there some institutions that should not have been bailed out? Absolutely. Should they have used the funds to bail out General Motors and Chrysler? No. That was the wrong source for that funding," Romney said.

Back in Michigan, Obama said to a cheering crowd that the investment had paid off.

"The hundreds of thousands of jobs that have been saved made it worth it. An American auto industry that's more profitable and competitive than it's been in years made it worth it," he said. "The taxpayers are being repaid."

That's consistent with what Gerald Nelson has seen. For the last 42 years, he has worked on wiring systems for new cars.

"I'd say probably 300 new hires I've seen in the last six months just coming through, and I'm sure there's more than that," Nelson says.

He acknowledges that this is not what people would have expected from Detroit just a few years ago. Right now, he says, his family and friends are doing all right economically, but he says it tentatively.