Accessibility links
Baseball's New Bling Is Made For Believers If you watch this year's playoffs, you may notice many baseball players are wearing a certain necklace. It's actually a "metal-infused wellness product," but mostly it's a reminder that baseball is a superstitious enterprise. 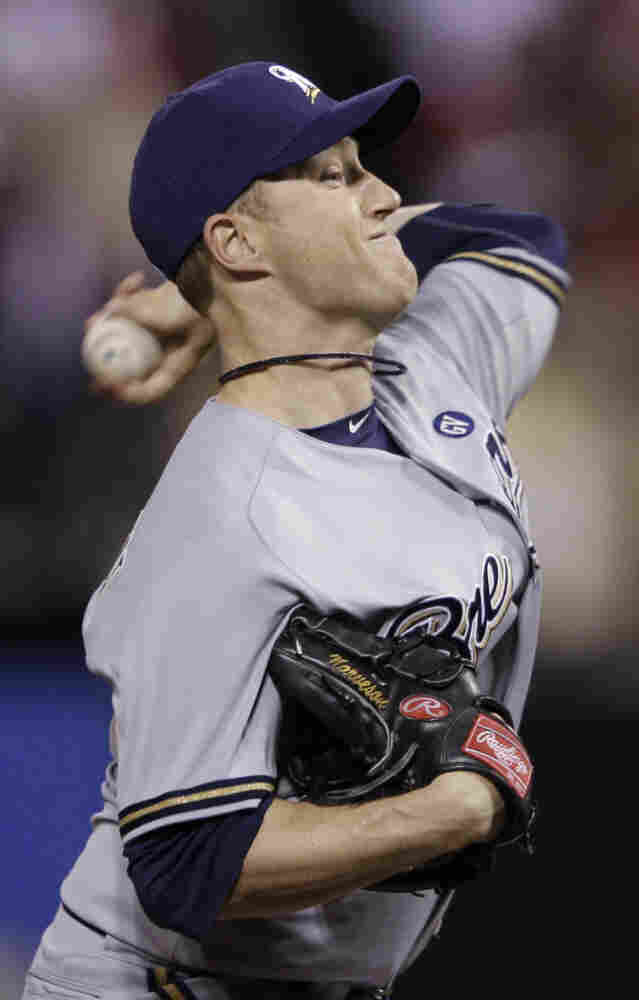 A Phiten necklace flies around the neck of Milwaukee Brewers relief pitcher Chris Narveson as he throws during Game 3 of the National League Championship Series against the St. Louis Cardinals on Wednesday. 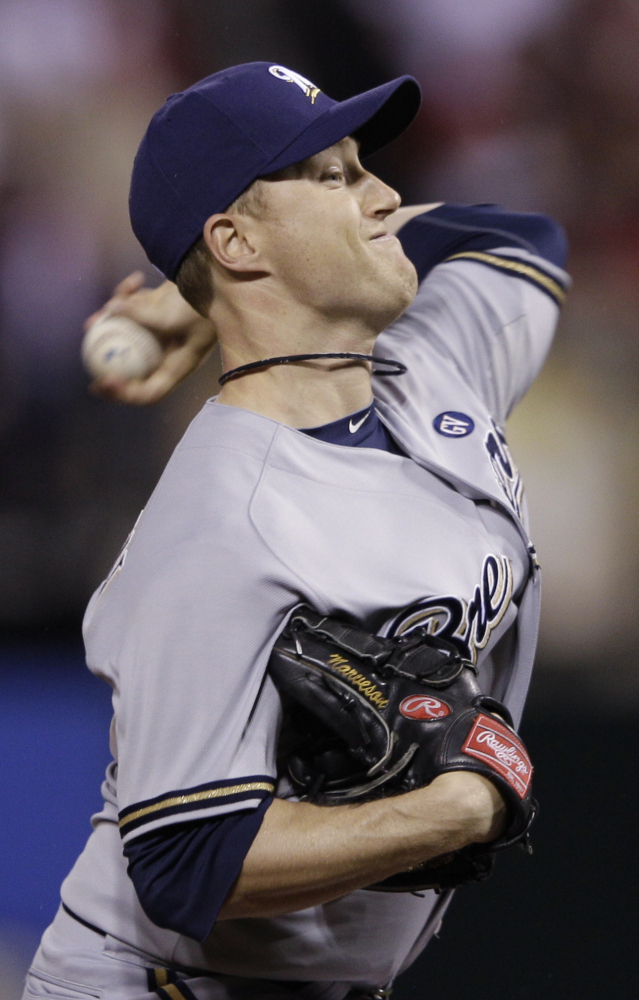 A Phiten necklace flies around the neck of Milwaukee Brewers relief pitcher Chris Narveson as he throws during Game 3 of the National League Championship Series against the St. Louis Cardinals on Wednesday.

Shouting "Your pitcher wears a necklace!" sounds like the kind of remark that could start a brawl in a major league ballpark. But if you watch this year's playoffs, you may notice most players do.

Not pearls — pearls would clash with most uniforms anyway — but a "metal-infused wellness product" that's apparently strands of titanium wrapped in nylon.

It's made by a Japanese company whose website doesn't even try to claim the necklace gives athletes an extra jolt of balance, calmness or energy. It just says: "Helping you be your best — optimizing your life."

I suspect most players wear these necklaces because most other players do, so why not? Baseball is a superstitious enterprise. Players tug at their sleeves before a pitch, tap their bat and refuse to change their socks — and often their underwear — during a winning streak.

Joe DiMaggio always touched second base when he ran in from the field. Wade Boggs, the Boston Red Sox batting champion, ate a whole roast chicken before games. After his former mistress so testified, opposing fans would cluck-cluck-cluck when he came to the plate. A pitcher named Brendan Donnelly threw away his undershirt when he lost a game, and as he played for six teams in nine years, Brendan Donnelly left a legacy of soiled laundry.

Of course, I could eat a whole roast goose and never bat .368 like Wade Boggs. A lot of players who imitate the superstitions of the great just wash out in the minor leagues.

But superstitions were performance enhancers before steroids. They're ludicrous but comforting. Even the most disciplined athletes — or opera singers or comedians — know they've been blessed with magical gifts and worry that their skills might vanish as unaccountably as they appeared. Superstitions offer an illusion of control. If you strike out, it's just because you changed your socks, not lost a step.

A little while ago, I ordered one of these metal-infused wellness products. Just as I was about to loyally order one inscribed with the Chicago Cubs logo, I asked myself: What could a necklace with the logo of a last-place ball club do for me? I got a Yankee necklace instead.

I felt no extra zing or pop as I exercised. But as I buttoned my shirt I wondered, "Why take this necklace off? Why not keep a little metal-infused wellness for writing, speaking and lifting our oldest daughter onto the top bunk of her bed?"

Then I thought: What if I'm hit by a car and they find a Yankee necklace under my shirt? My family would say, "Poor dear. Must have gone crazy."

So I threw it away after just a day. The necklace didn't go with my shoes anyway.