Accessibility links
Occupy Wall Street Inspires Worldwide Protests Taking a cue from the protests in New York, protesters across the globe took to the streets Saturday to demonstrate against what they say is corporate greed. The protests were largely peaceful, except in Rome, where there were running battles between black-hooded anarchists and the police. 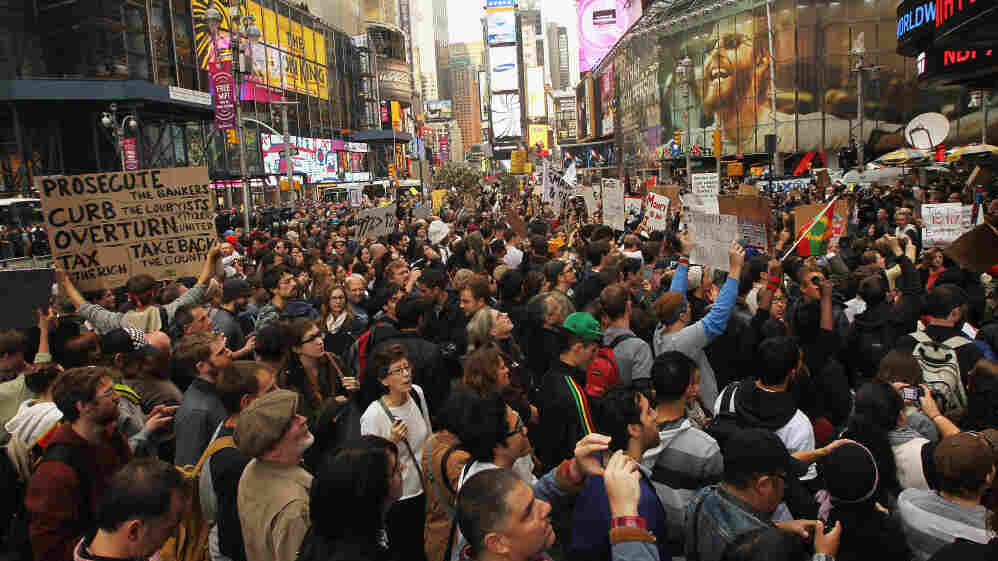 Demonstrators protest in New York's Time Square on Saturday. Thousands of people took to the streets in cities across the world, inspired by the Occupy Wall Street protests against economic inequality. 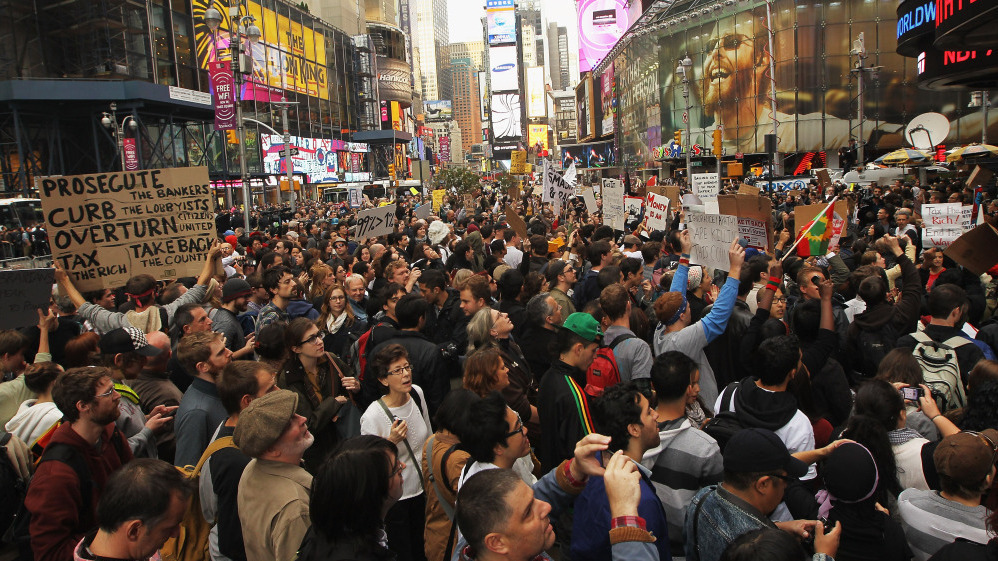 Demonstrators protest in New York's Time Square on Saturday. Thousands of people took to the streets in cities across the world, inspired by the Occupy Wall Street protests against economic inequality.

Taking a cue from the Occupy Wall Street protests in New York, protesters across the world took to the streets Saturday to demonstrate against the banks and what they say is corporate greed.

Organizers of the global protests said there would be demonstrations in 951 cities in 82 countries. On their website, the organizers say they're demanding change and want to let politicians and the financial elite know it's up to the people to decide the future. 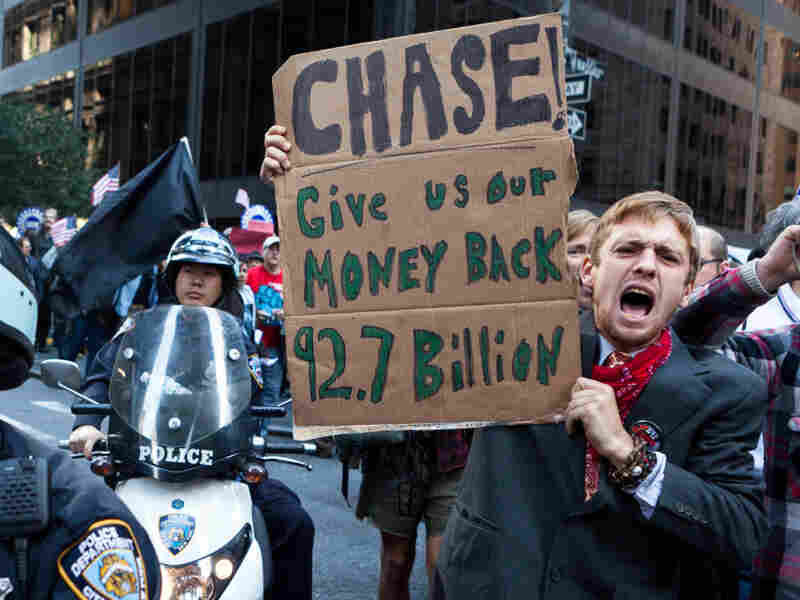 As many as 1,000 Occupy Wall Street protesters marched to a Chase bank in New York's financial district to decry corporate greed. 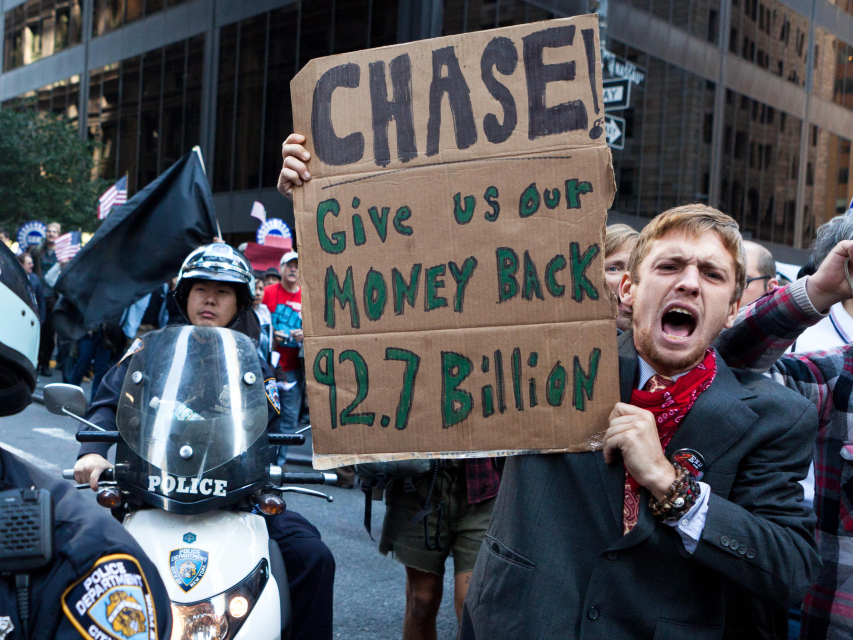 As many as 1,000 Occupy Wall Street protesters marched to a Chase bank in New York's financial district to decry corporate greed.

The protests were largely peaceful, except in Rome, where there were running battles between black-hooded anarchists and the police. Dozens of people were reported injured.

Hundreds of protesters left New York's Zucotti Park at 11 a.m., banging drums and chanting, "Banks got bailed out. We got sold out."

They marched to a Chase bank, where a few protesters closed their accounts, but they didn't stop other customers from getting inside or seek to block the business.

Police escorted the relatively polite crowd through Lower Manhattan for more than two hours. Donna Presnell, who carried a sign reading "There is enough for everyone," said she hopes the Occupy Wall Street protests lead to big changes.

"I brought my kid because I want to demonstrate," she said, as her daughter sat in a stroller eating carrots. "It's not just young hippies who are here; it's families, it's serious people. We're working and we're studying and we're wanting to do something."

The marchers walked more than two miles, meeting up with a student-led protest at Washington Square Park. There, police arrested 24 people at a Citibank branch. Most were detained for trespassing after they ignored a request by the bank to leave, police said.

By evening, the protesters had filled Times Square. Some of the people had marched from Zuccotti Park, while others joined later in the day. 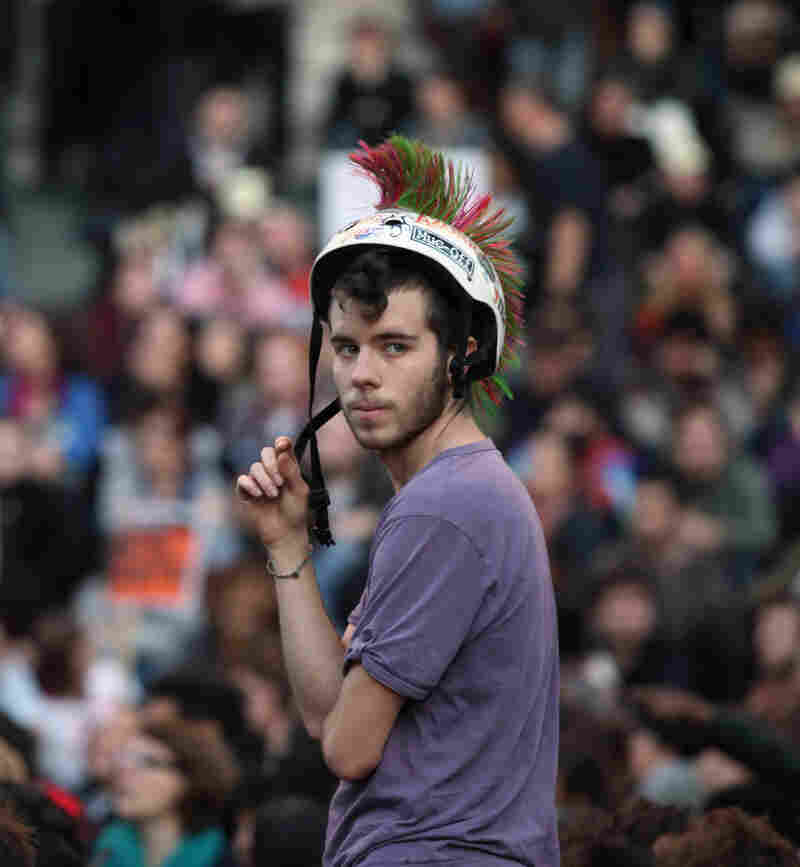 A protester stands outside St Paul's Cathedral in London. 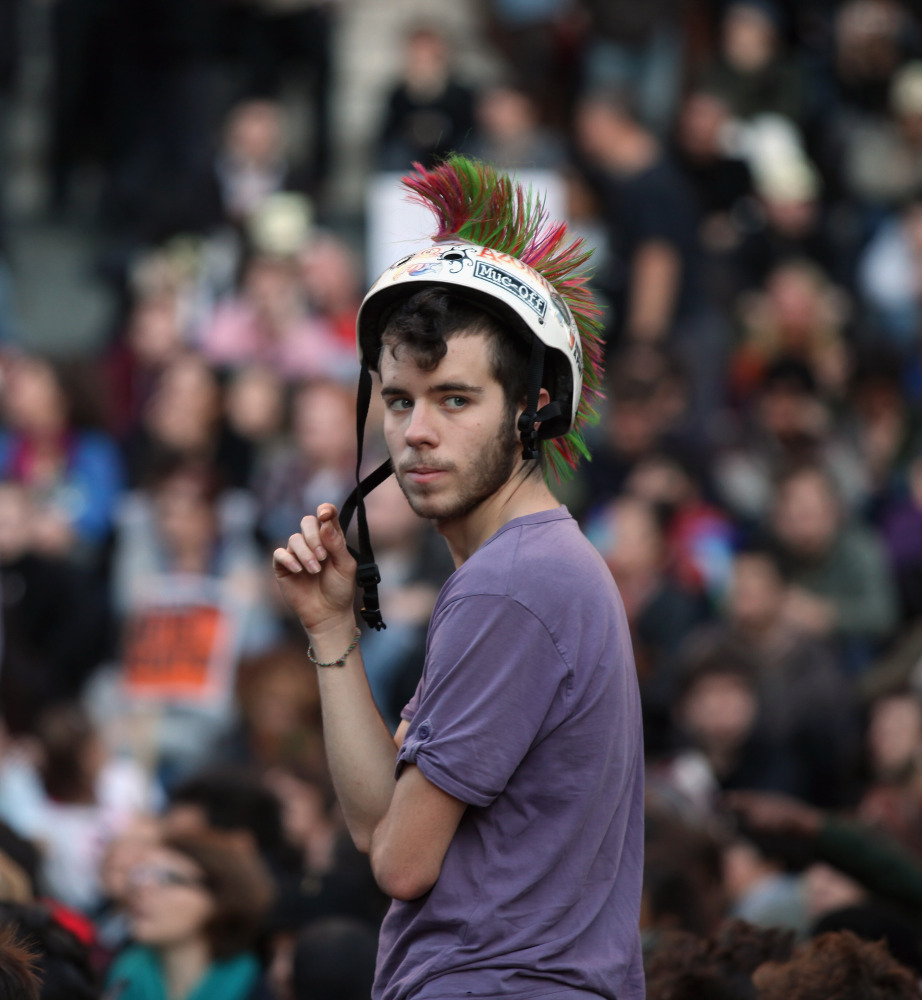 A protester stands outside St Paul's Cathedral in London.

The demonstrators mixed with gawkers, Broadway show-goers, tourists and police to create a chaotic scene in the midst of Manhattan.

As protesters chanted from within police barricades, police — some in riot gear and mounted on horses — tried to push them out of the square and onto the sidewalks in an attempt to funnel the crowds away.

"It's clear," NPR's Jeff Brady reported, "this is likely going to be one of the largest protests yet for the Occupy Wall Street movement."

Over the course of the day, more than 80 people were arrested.

Tens of thousands nicknamed "the indignant" marched in cities across Europe on Saturday, as protests that began in New York linked up with long-running demonstrations against government cost-cutting and failed financial policies in Europe.

In London, one of the financial capitals of the world, hundreds of people gathered on the steps of St. Paul's Cathedral, close to the financial district. They waved banners spelling out their message: "Bankers are the real looters"; "Beware, people are coming out of their comas." 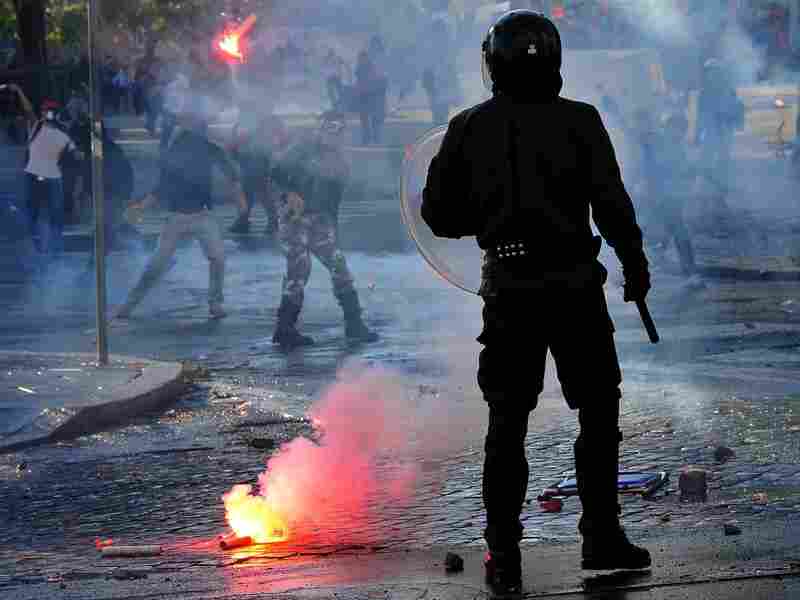 An anti-riot police officer stands as protesters launch flares in Rome after a demonstration turned into a riot Saturday. 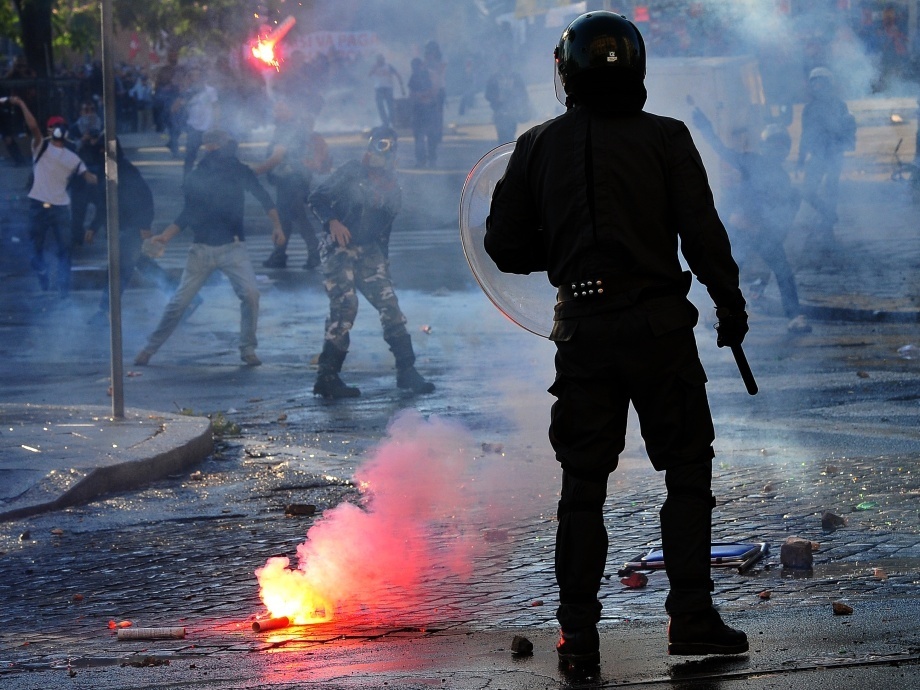 An anti-riot police officer stands as protesters launch flares in Rome after a demonstration turned into a riot Saturday.

In Toronto, hundreds of demonstrators converged near the Toronto Stock Exchange and the headquarters of some of Canada's major banks to decry what they say is government-abetted corporate greed that has served the elites at the expense of the majority of people.

The Toronto demonstrators marched to St. James Park in the east-central end of the city, where they plan to camp for at least the next few days.

Across the globe in Sydney, more than 500 demonstrators set up camp in Martin Place in the central business district.

"We're not just talking about a change of government," Josh Lees, one of the group's organizers, said. "I think what everyone here is talking about is a change in the entire way our system works. Our entire way that money dominates all of our political lives, the big corporations — the 1 percent who we're talking about — the mining companies, the banks and so on who dominate our entire political establishment, too. Both major parties in Australia are effectively just servants of capital, big money, and everything like that."

In Rome, a protest turned ugly, as a small group broke away from the main demonstration and wreaked havoc in streets close to the Colosseum.

Clad in black with their faces covered, protesters threw rocks, bottles and incendiary devices at banks and Rome police in riot gear. Some protesters had clubs, others had hammers. They destroyed bank ATMs, set trash bins on fire and assaulted at least two news crews from Sky Italia.

Around 70 people were injured, according to news reports, including one man who tried to stop the protesters from throwing bottles.

"It's very said," she reported, "because it was started as a very peaceful demonstration" with a lot of young people. Poggioli said the situation is terrible for young people in southern Europe, particularly in Italy, where there are few work prospects.

"They have a sense that they have no future, and that's the heart of it," she said. "There are a lot of young people who are out here demanding that their future be given back to them."

The latest march in New York came a day after protesters beat back a plan they said was intended to clear them from privately owned Zuccotti Park where they have slept, eaten and protested for the past month. They said their victory on Friday will embolden the movement across the U.S. and abroad.

Among the demonstrators in New York withdrawing their money from Chase was Lily Paulina, 29, an organizer with the United Auto Workers union who lives in Brooklyn. She said she was taking her money out because she was upset that JPMorgan Chase was making billions of dollars, while its customers struggled with bank fees and home foreclosures.

"Chase bank is making tons of money off of everyone ... while people in the working class are fighting just to keep a living wage in their neighborhood," she said.

"We aren't going to be a part of this system that doesn't work for us," said another demonstrator withdrawing her money, 20-year-old Brooklyn College student Biola Jeje.

Other demonstrations were planned around the city all day Saturday, including an anti-war march to mark the 10th anniversary of the war in Afghanistan.

NPR's Jeff Brady reported from New York; Philip Reeves and Larry Miller reported from London; and Stuart Cohen reported from Sydney for this story, which contains material from The Associated Press.