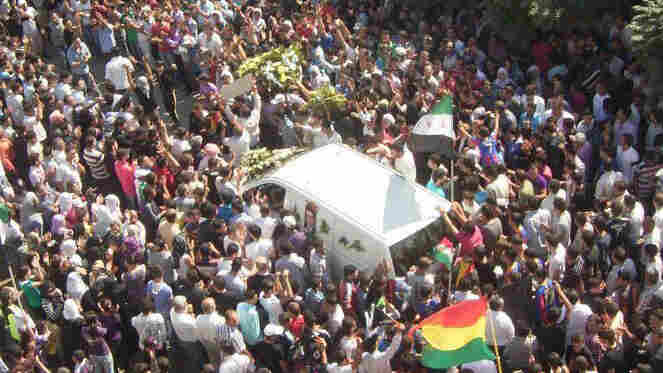 Mourners surround the hearse carrying the coffin of Kurdish opposition leader Meshaal al-Tammo during his funeral last Sunday in Amuda, in northern Syria. Supporters blamed the Syrian government for his death. 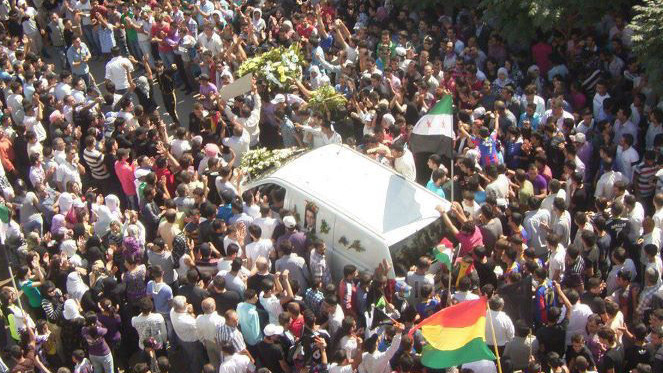 Mourners surround the hearse carrying the coffin of Kurdish opposition leader Meshaal al-Tammo during his funeral last Sunday in Amuda, in northern Syria. Supporters blamed the Syrian government for his death.

From the outset of the Syrian uprising last spring, Syria's president, Bashar Assad, offered promises of reform. Activists, meanwhile, documented abuses by his security forces, including video footage of shootings against unarmed protesters.

Now, the Assad government appears to be relying exclusively on brutal repression, giving free reign to the security services to crush the revolt, according to analysts inside and outside the country.

"It's all security, they are in command," said one Damascus-based analyst who spoke on condition of anonymity. "The people who think more politically are marginalized."

According to Randa Slim with the New America Foundation, the Syrian regime has no political strategy aside from using violence in an attempt to restore a wall of fear.

"This is a policy that was meant by the regime to break down the resolve of the activists and instead it is strengthening the resolve," Slim said. "It has become an existential battle. It's either the regime or them."

Tough security measures in the capital and the suburban neighborhoods have made it much more difficult and much more dangerous to mount large anti-government protests, according to one activist who did not want to be named out of concern for her safety.

"They are more scattered then they used to be," she said of protests around the capital. "You cannot see the same number, where you would see a couple of thousands; you cannot see that any more. The security is much, much tighter. And ruthless."

I think the brutality has several explanations. One is that's what they are used to doing, it has worked in the past. But an additional benefit, it blocks the possibility of compromise.

Paul Salem, of the Carnegie Middle East Center, on the Syrian government

She says the Assad regime now targets organizers, especially those who advocate peaceful protest. Some who are arrested are brutally tortured as a lesson to others.

"They know who they are seeking," she added. "At the beginning it was random. They would catch whoever they see. Now, they are a little more selective with their custody."

The Syrian government has repeatedly blamed armed gangs for the violence. While government opponents have been using weapons more frequently in recent days and weeks, the Syrian security forces have been blamed for instigating the vast majority of the violence, according to human rights groups and many foreign governments.

In provincial capitals like Homs and Hama, the worst abuses are carried out by government paramilitary units known as the Shabeeha, says Randa Slim, who is researching the protest movement.

"Whenever there is a town where there is an active opposition going, elements of the Shabeeha and some of the soldiers will go on the outskirts with loud speakers and threaten to come in, raping their wives, raping their mothers, raping their sisters," she said.

Activists allege the regime is using rape as a weapon, but widespread cases have not been confirmed. However, even threatening sexual assault in Syria's conservative society has spread fear and anger.

In the city of Homs, more have been killed in anti-government protests than anywhere else in the country. The human rights group, Avaaz, which documents the names of the dead counts 1,120, since the uprising began. Weapons are widely believed to be flooding into Homs.

"People have organized themselves to hold their ground to push back against security services," says one analyst who asked not to be named. "And there are a number of army defectors who are involved in operations to secure peaceful demonstrations and to take out snipers and storm check points."

The Syrian regime has portrayed the violence in Homs as a civil war.

"What we have in Homs, is 10 armed gangs — 33 people have been kidnapped from different sects — then they kill from this sect and they kill from the other. Any terrorism that targets this unity is destructive to Syria," said Buthain Shaaban, an adviser to President Assad.

But analysts and diplomats say it's the government crackdown that has pushed some in the protest movement to take up arms against the regime.

"I think the brutality has several explanations. One is that's what they are used to doing, it has worked in the past. But an additional benefit: It blocks the possibility of compromise," said Paul Salem, head of the Carnegie Middle East Center in Beirut.

Salem says that there are some in the Syrian government who recognize the protest movement has legitimate demands and share the goals of reform.

"Definitely, some members of the regime have been counseling politics, negotiation, a coalition government; there are many ways to deal with the crisis," he said.

But Syria's hardliners, he adds, are threatened by change.

"These intelligence and effectively mafia interests are very worried about reform and they can effectively block reform by throwing blood on the streets, and making it impossible for the opposition to accept negotiations," he says.

There is a long-term price to pay for so much bloodshed. Even Syria's strongest international allies — including Turkey, Russia and now China — have been increasingly critical. And in Damascus, many Syrian say privately that they can no longer support a regime that has used so much violence in an attempt to crush dissent.