Accessibility links
Chance To Spot Rare Supernova Fading Fast One of the brightest supernovas in the last century is now visible. Discovered shortly after its light reached Earth in August, the supernova will last for more than a decade. 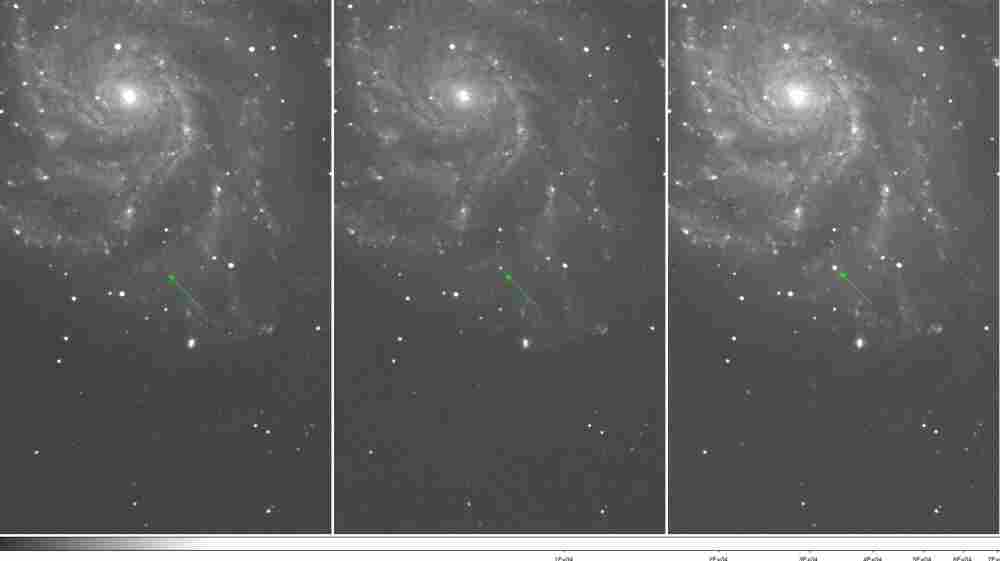 These images show Type Ia supernova 2011fe over the course of three nights in August. It's located in Messier 101, the Pinwheel Galaxy.

Supernova 2011fe is bringing out the stargazers. It's one of the brightest supernovas in the last century and it's now visible. It's the kind of event amateur astronomers dream of.

The supernova will last for more than a decade, but it won't stay this bright. Within the next week, the light that took 21 million years to reach earth will fade out of view for amateur astronomers.

On a Saturday night in the desert town of Yucca Valley, Calif., two hours east of Los Angeles and far away from the big city lights, the town's community center parking lot is buzzing. There's a group of excited backyard astronomers like Carolina Liechtenstein.

"I spend hours every night with my dog and maybe some popcorn and just look at the stars. I haven't turned on my TV lately," she says. "I get goose bumps." 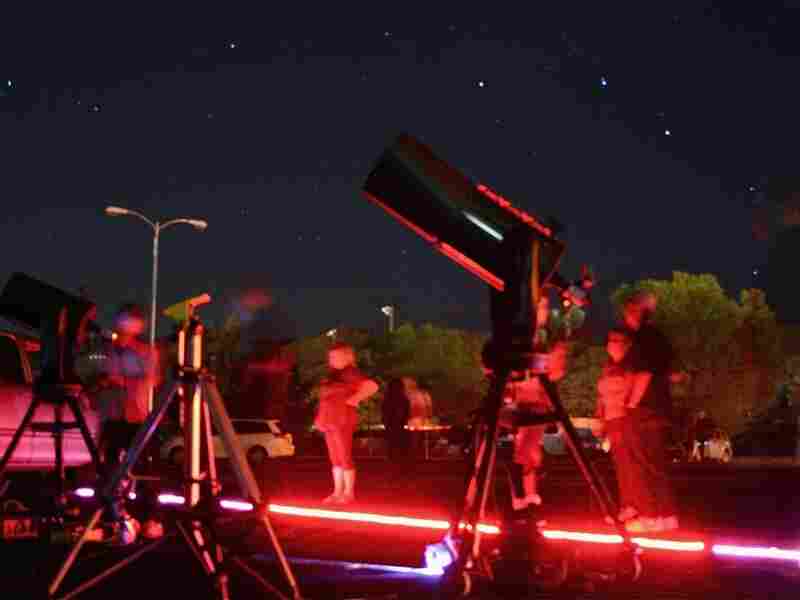 Highly sensitive cameras were set up outside the Yucca Valley Community Center in California recently to capture images from deep space. One of the brightest supernovas in the last century won't be visible to amateur stargazers within the next week.

Liechtenstein's guides for the Saturday stargazing are two professional astronomers. Paul McCudden and Dean Arvidson set up three highly sensitive cameras that look like giant telescopes. They're projecting the images onto a large screen.

By day, they teach courses in physics and astronomy at Los Angeles City College. For this crowd, Arvidson and McCudden take to the mic and play tour guides of deep space.

This supernova is just above the Big Dipper. It's a Type 1a, meaning it formed from a thermonuclear explosion of a white dwarf star.

The star gazers start to get an image of Messier 101, the Pinwheel Galaxy, on their screen. Within that galaxy, McCudden points to a faint speck of light — the supernova.

"This is pretty rare. You don't see supernovas this bright very often," he says.

Dr. Peter Nugent from Lawrence Berkeley National Laboratory was looking at that same galaxy this past August when he discovered the supernova, just hours after light from the explosion reached earth.

"This is the fifth-brightest supernova in the last 110 years," he says.

One like this has never been caught that young. Also, Nugent says, astronomically speaking, it's really close.

"The supernova is only located 21 million light-years away," he says. "We have had only about a half a dozen Type 1a supernova in the past century that have been as close."

So it's a pretty special moment for the people standing in Yucca Valley. For Crescencio Garcenyella from Landers, Calif., seeing it makes him feel like an explorer himself.

"Like Christopher Columbus," he says. "Just gaze and wonder how gigantic this universe is, and we're part of this."