Accessibility links
Wilco: Tiny Desk Concert Armed with acoustic guitars, tiny amps, a desktop percussion unit and a ton of grace, Wilco plays three new songs from The Whole Love and an old favorite in a stripped-down but powerful set at the NPR Music offices.

There comes a point at the height of a band's career where its members don't have to wake up on a Saturday morning during a tour to go play some office concert. For young acts, that sort of appearance can be about reaching new fans. But for Wilco, it's about pleasing those who've come to care passionately about the music.

Just a week before our first-ever Saturday Tiny Desk Concert, Wilco members Jeff Tweedy, John Stirratt and Pat Sansone took questions from fans on All Songs Considered about their fabulous new record, The Whole Love. Then, on an early-autumn Saturday morning, Wilco came to the NPR Music offices armed with tiny amps, a desktop percussion unit, acoustic guitars, a keyboard and a ton of grace, to play three new songs and an old favorite for NPR staff members and their families.

For my money, Wilco is the best rock band in America, made up of brilliant songwriters and players. They're subtle at times, but they also have Nels Cline, whose outbursts on the guitar are pure intensity, even here at my desk. Confined to our small space, the band brought a little ingenuity: With Tweedy singing and strumming and Stirratt's melodic, solid bass making it possible for his bandmates to stray wildly, drummer Glenn Kotche played on percussive toys and noisemakers, even using a padded envelope as a drum head. And Pat Sansone, who on stage plays everything from maracas to electronics, here played guitar, sang vocal harmonies and even shook a paperclip holder. Mikael Jorgensen stays in the background, playing keyboards and various electronics, but he makes so much of that Yankee Hotel Foxtrot sound happen on stage that he's essential to the texture and dynamic of the band. It was an unforgettable day.

Even at a seemingly comfortable point in its brilliant career, Wilco has an abundance of both fire and craft. As you'll see in this Tiny Desk performance, the group's songs still glow beautifully when stripped of their pyrotechnics. 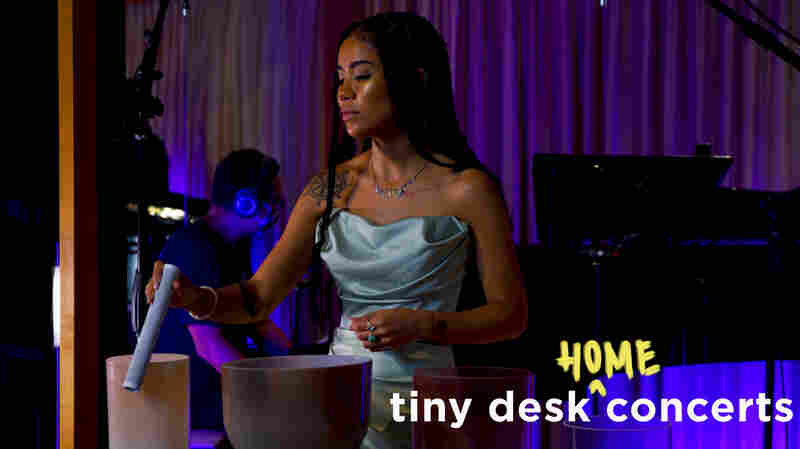