Accessibility links
A Twitter Push To Keep Chiquita From Splitting Town Over 300 jobs are at stake if the company leaves its Cincinnati headquarters, so locals are tweeting the CEO. Not to be outdone, residents in Charlotte, N.C., have started their own campaign to lure the company to their city. It's a good-natured battle over a decision usually kept behind closed doors. 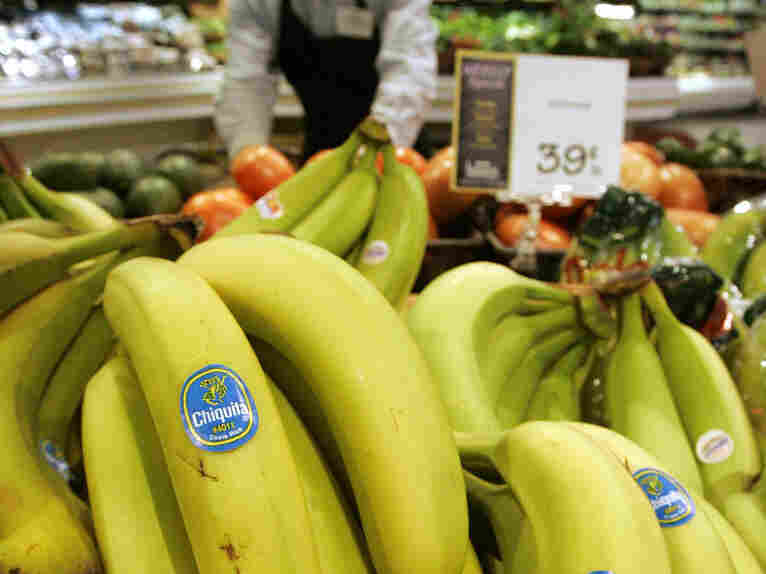 Chiquita bananas piled on display at a supermarket in Bainbridge, Ohio. The Cincinnati-based company is considering a move to another city.

Cincinnati and Charlotte, N.C., are similar in size and culture, and now they are going head to head in an effort to gain the favor of Chiquita. The fruit company is considering moving its Cincinnati headquarters, taking more than 300 jobs with it.

Residents of both cities refuse to sit idly by. They have taken to Twitter to communicate directly with the company's chief executive officer, Fernando Aguirre.

Aguirre spends a lot of time tweeting, from talking about his job to complimenting people to commenting on baseball.

After hearing that Cincinnati-based Chiquita was considering a move to another city, residents created a Twitter hashtag, #NoCincyBananaSplit, and urged CEO Fernando Aguirre to keep the company in Ohio.

Cincinnati marketing executive Kevin Dugan follows Aguirre on Twitter and sat down to scan through the CEO's tweets for a behind-the-scenes look.

One thing Aguirre does not tweet about much is the possible cost-saving move of his company's Cincinnati headquarters. The fruit and salad company, with annual revenues topping $3 billion, is big business.

Residents in Cincinnati don't want the 330 executives who work there to leave. Last month, Dugan and his friend J.B. Kropp had an idea: Why not try to talk Aguirre out of the move on Twitter?

"I just went to where we knew he liked to play and where he listened and responded," Kropp says. "So for us, it was ... natural and made a lot of sense."

They came up with the hashtag #NoCincyBananaSplit and are attaching it to every tweet they send out about the potential move.

Michelle Spelman of Cincinnati saw the hashtag and is now using it on her tweets. As her 8-year-old son, Cannon, eats a banana, she turns something written on the sticker into a teachable Twitter moment.

"Cero grasa means zero fat in Spanish," she notes. "So let's put that out on Twitter, because I bet you other people saw this sticker and were wondering too, don't you think?"

It is possible Chiquita will keep its headquarters in Cincinnati, but the company could also move to Charlotte or someplace else. In Charlotte, Brian Francis began following Aguirre and launched a competing hashtag, #BananasForCLT.

"We put a [post] up on the Charlotte Blog and were just overwhelmed by the response," Francis says. "[There were] hundreds of messages from people around the Charlotte Twittersphere, saying the reasons that they love Charlotte and the reasons they think Chiquita would love us as well."

One Charlotte restaurant sponsored a banana pudding taste-off in honor of Bananas for Charlotte. Organizers say there were hundreds of tweets and a response from Aguirre.

Chris Heuer, a consultant for Deloitte, works with executives to increase their use of social media. He says it's much like trying to get in behind the velvet ropes at a nightclub. Everyday Twitter users have now found a place where they can be heard.

"This is something very unique, that the CEO would be confident enough to be engaging around this topic and to embrace that playful spirit relative to this friendly rivalry that's developing," he says.

And Heuer expects more CEOs to go this route. He says not everybody has a comfort level for tweeting and being on the record, but Aguirre does.

So what does Aguirre think of people talking with him via Twitter? He said this in a tweet Thursday:

Chiquita will not give the timetable for its decision, so it appears the tweeting will continue in what some are calling the tale of two hashtags.