Accessibility links
Times Have Changed Since Reagan's 1986 Tax Reform In 1986, another politically divided Congress approved the biggest tax code overhaul in the nation's history. Though much has changed since then, today's Congress faces a similar tax crisis with a fast-approaching deadline to decide on a plan. 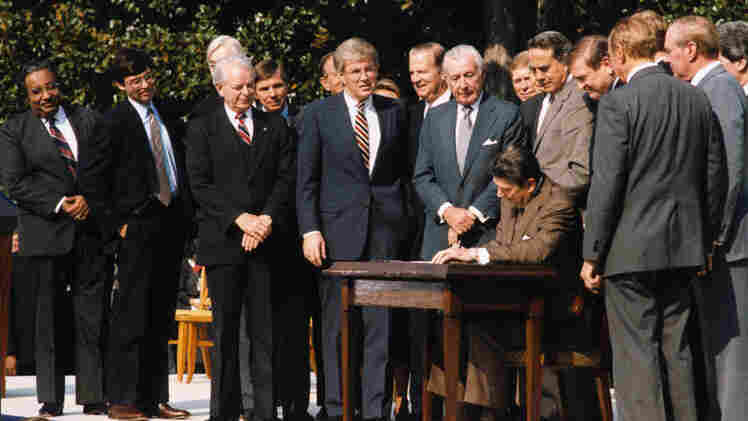 President Reagan signs the Tax Reform Act of 1986. The bipartisan reform shifted a large part of the tax burden from individuals to corporations and also exempted millions of low-income households from federal income taxes. 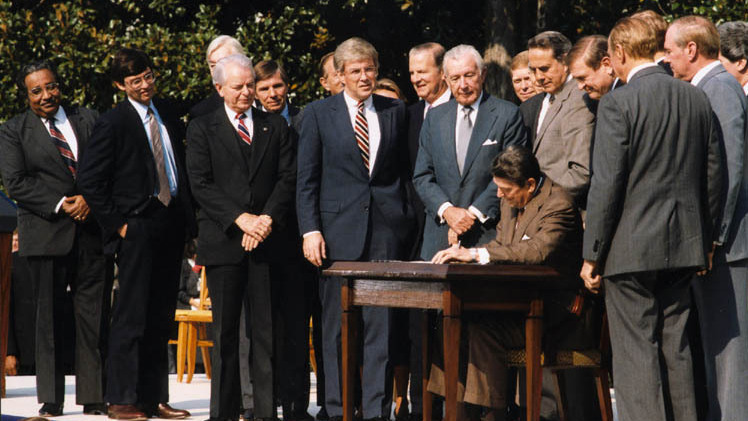 President Reagan signs the Tax Reform Act of 1986. The bipartisan reform shifted a large part of the tax burden from individuals to corporations and also exempted millions of low-income households from federal income taxes.

The clock is ticking down on Capitol Hill as a congressional supercommittee has only until Thanksgiving to agree on a plan shrinking deficits by more than a trillion dollars. The entire Congress then has to pass it by Christmas Eve or face huge across-the-board spending cuts.

Twenty-five years ago, another politically divided Congress approved the biggest tax code overhaul in the nation's history. But much has changed since then.

In 1986, on the south lawn of the White House one sunny morning in late October, Cabinet members, leading lawmakers and a large crowd rose to applaud President Ronald Wilson Reagan, there to sign into law the newly minted Tax Reform Act.

Getting the bill passed had required a rare trip by the 40th president to Capitol Hill to browbeat fellow Republicans who had earlier blocked the measure in the House.

"I think all of us here today know what a herculean effort it took to get this landmark bill to my desk," Reagan said to the assembled crowd.

The Tax Reform Act of 1986 shifted a large part of the tax burden from individuals to corporations; it also exempted millions of low-income households from federal income taxes. Reagan called it "a sweeping victory for fairness" where "vanishing loopholes and a minimum tax will mean that everybody and every corporation pay their fair share."

Bruce Bartlett, a former domestic policy adviser in the Reagan White House, says fairness was the touchstone for the Tax Reform Act.

"Keep in mind that one of the most important elements of that deal was that Ronald Reagan agreed to raise the capital gains tax rate from 20 percent to 28 percent, because he agreed with the Democrats that capital gains and ordinary income ought to be taxed at the same rate," says Bartlett, who is also the author of The Benefit and the Burden, a new book on tax reform.

It took more than two years to produce that tax code overhaul. During that time, Reagan went on the road to plead his case for the plan. At a high school in Atlanta, Ga., in 1985, Reagan said they were going to "close the unproductive loopholes that allow some of the truly wealthy to avoid paying their fair share."

Meanwhile in Congress, Democrats and Republicans worked together to merge competing proposals for tax reform. Still in office today, Democratic Sen. Patrick Leahy of Vermont was there during the passage of the bill. He says it was a different era.

"We had a lot of grownups in both parties, people who actually wanted the government to work," Leahy says.

Another Senate Democrat, Budget Committee chairman Kent Conrad of North Dakota, says for this divided Congress, it's a much heavier lift to agree on a sweeping deficit reduction plan because "the extremes on both sides are more extreme."

Democrats want more taxes to help close deficits, but Republicans say no, not even for the wealthiest.

"It is patently false, does not further the debate, to run around saying the rich are not paying their fair share," says Republican Sen. Rand Paul of Kentucky, a darling of the Tea Party.

President Obama, for his part, vows he'll veto any deficit reduction deal that asks nothing from the very wealthy. Obama has stated that he does not want a one-sided deal that "hurts the folks who are most vulnerable."

The biggest difference between 1986 and the current situation in Congress, says former Reagan White House adviser Bartlett, is that this time each side is focused on what it stands to lose.

"The 1986 act was really a coming together of the liberal idea of getting rid of tax loopholes with the conservative idea of flattening the tax rates," he says, "and so each side felt that they had something to gain by the effort."

Still, Virginia Democratic Sen. Mark Warner says with the financial world keeping a close eye on Congress, a deficit reduction deal has got to be reached. He says if it includes a big tax reform like the one a quarter-century ago, so much the better.

"The urgency is even greater now, [and] the politics may be tougher," he says.

And the time is, by far, much shorter.

A previous Web version of this story incorrectly identified the author of The Benefit and the Burden. The book was written by Bruce Bartlett, not Brooks.