Accessibility links
Misrata Militia Bars Entrance Into Libyan City Forces loyal to Moammar Gadhafi terrorized the Libyan city of Misrata during the war. Because it never fell, the city became an icon of the revolution. But Misrata is gaining a reputation for a militia that is carrying out acts of vengeance, looting and restricting movements in and out of the city. 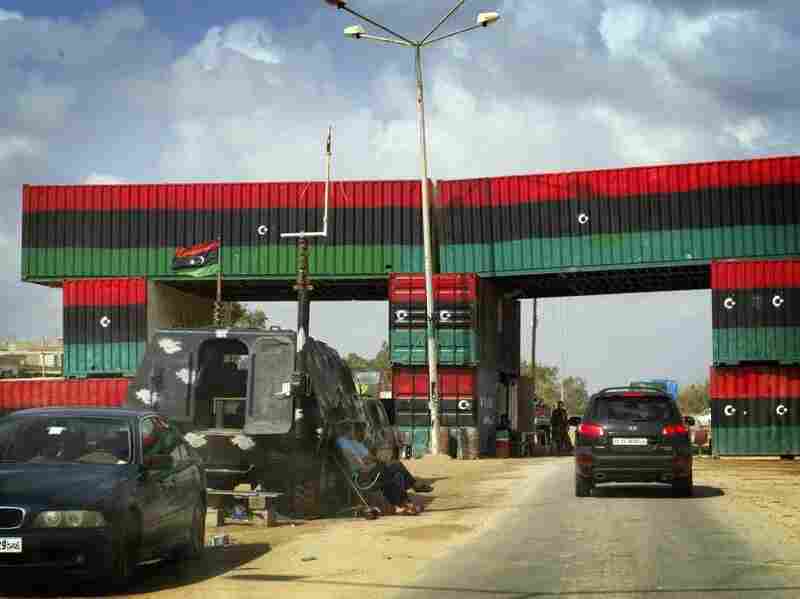 A check point between Misrata and Beni Walid, Libya.

Forces loyal to Moammar Gadhafi terrorized the Libyan city of Misrata during the civil war. Because it never fell, the city became an icon of the revolution. But Misrata now is gaining a reputation for a militia that is carrying out acts of vengeance, looting and restricting movements in and out of the city.

Wags now quip that a visa is needed to enter Misrata because of the tight restrictions on access to the large coastal city. But it's no joke to the people here.

At a checkpoint 20 miles outside Misrata, dozens of cars are parked in the hot sun waiting for permission to enter. But most are being turned away. Mohammed Abdullah, who has been sitting by for hours, has family in Misrata but is being barred from entering.

"I didn't know this was going to happen," Abdullah says. "We are all Libyans. We should help each other. You see all these people? They are trying to see their families. Many women are crying. Misrata has become like its own country."

A Misrata fighter tries to stop the interview, saying NPR isn't allowed to talk to people here. He says all those being barred from entering the city are linked to Ghadafi, and that's why they aren't being let in. But others tell a different story.

"Misrata — it's very racist to other people from outside," says Mahmoud al-Kish of Tripoli. He is married to a woman from Misrata, but when he tried to enter the city with her, he was stopped. He had to call a relative to come to the checkpoint and vouch for them.

"It's 30 [kilometers] from Misrata," al-Kish says. "And when he come, he sign like a paper: 'I am responsible for Mahmoud and my sister. If anything happen, I will be responsible.' "

It's a sign of the new divisions that are emerging in Libya. The National Transitional Council, nominally the body that oversees Libya now, is weak and divided. The country feels instead like a series of city-states. Misrata and Zintan in the western mountains have their own militias and regional governments that act almost autonomously. There is little cohesion or coordination among the various groups, and no one to rein in their excesses.

Recently, wherever the Misrata fighters have gone, destruction has followed. In Gadhafi's birthplace, residents allege they swept through the town burning and looting. In Abu Hadi, the evidence of that is everywhere: destroyed homes with pro-revolutionary graffiti sprayed on them, empty now of possessions.

In Misrata, carloads of stolen goods from the fighting in Sirte and other vanquished pro-Gadhafi towns nearby are regularly seen coming into the city. Saddiq al-Badi, the deputy head of the Misrata Council, acknowledges that there have been issues in the aftermath of battle.

"These are the actions of individual fighters," al-Badi says. "It's not our policy. We have issued instructions not to do that, but some people ignore our orders."

He says the restrictions on who comes in and out of the city are important because there are security concerns. There are Ghadafi loyalists, he says, who want to cause trouble.

Many Misrata residents agree, the memory of the months of brutal siege still fresh in their minds.

"Misrata suffered a lot," says Abdullah Ahmed. "I still remember myself; we stayed for two months — no electricity, no water."

The military council has instituted new measures to vet even Misrata residents who left during the siege and now want to return. Returning residents must get three of their neighbors to sign a paper vouching for them.

Abdullah Ahmed did that for his neighbor, and he thinks it's a good idea.

"In the beginning we had some problems in Misrata," he says. "We had some people coming from another city carrying weapons and threatening other people. To get in, you have to be checked, and you have to see if you are wanted or not."

The mood in Misrata seems unlikely to change anytime soon. At almost every checkpoint into town there are slogans painted with unwelcoming messages: "Those who didn't stand with Misrata are traitors," reads one; "Those who left when times were tough should not be allowed back now," reads another.

One Misrata fighter says, "Many of us believe that those people should be barred from returning. They could be collaborators. Some of them did very bad things to the people of Misrata. We don't want them here."