Accessibility links
'West Side Story' Film Still Pretty, And Witty, At 50 Fifty years ago, the film version of the acclaimed Broadway musical premiered in theaters across the country. Two of the film's stars — Rita Moreno and George Chakiris — and theater critic Misha Berson join NPR's Neal Conan to discuss the movie's legacy. 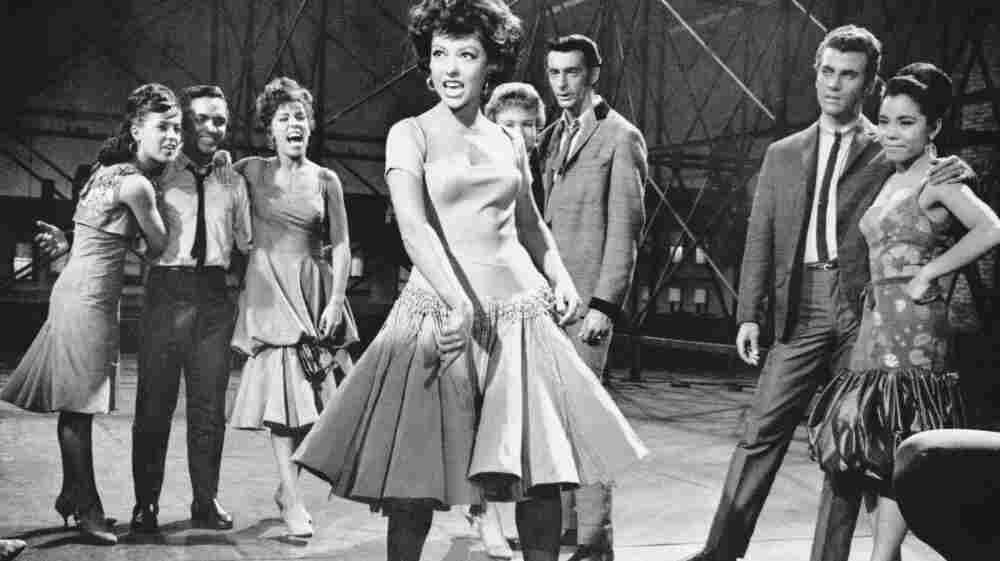 According to actress Rita Moreno, who played Anita in the film, Jerome Robbins' challenging choreography made the filming of West Side Story a grueling experience: "I think most dancers ... [worked] so bloody hard that the only way to live through some of the physical torture was just to, you know, employ your sense of humor."

Fifty years ago, the film version of the acclaimed Broadway musical West Side Story premiered in theaters across the country. Like the original production, the film set Shakespeare's Romeo and Juliet against the backdrop of 1950s New York, and for many the story holds up just as well today as it did five decades ago.

Two of the film's stars — Rita Moreno, who played Anita, and George Chakiris, who played Bernardo — join NPR's Neal Conan to talk about the film's enduring meaning. Theater critic Misha Berson, author of Something's Coming, Something Good: West Side Story and the American Imagination, also joins the conversation to discuss the musical's evolution and its lasting influence on musical theater and pop culture.

Berson: "Originally, when Leonard Bernstein, the composer, and Arthur Laurents, the writer, got together and started thinking about this, they originally thought the best thing to do would be to make it about Italian Catholic kids and Jewish kids in the Lower East Side. And they and Jerome Robbins, the director and choreographer, spent quite a lot of time working on this version, which would have been called East Side Story.

"But after they tried a bunch of scenes they had outlined — they really went fairly far in that direction — they just realized that this ... wasn't current enough. It wasn't fresh enough, and they dropped it. And they went on [a] hiatus from this idea and years passed before they came back to it and made the decision to reset it among Puerto Rican kids and Anglo kids on the Upper West Side."

On why the musical was ultimately a success

Berson: "There really are so many innovations in West Side Story in terms of [the] Broadway musical that you could go on and on about it. There had never been a romantic Broadway musical where the three main male characters wound up dead. This was really a musical tragedy. That was one thing. Another thing was that the music was very jarring. It was very modernist, quite different than the usual ... Broadway show.

"And the show was about bigotry and about young people. This was really the first show, first Broadway show, that was about teenage angst." 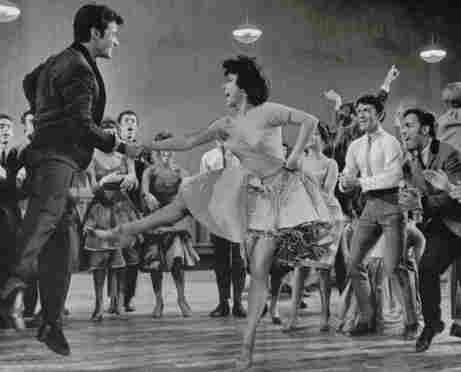 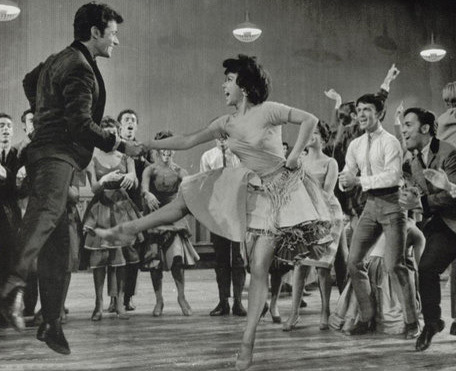 On the movie's timelessness

Berson: "The appeal of this story is very much the appeal of the great play it's based on, Romeo and Juliet. In fact, the writer, Arthur Laurents, really took a lot of plot points from Romeo and Juliet. But ... in Romeo and Juliet, there were these warring houses. You never understood what the feud was between the Montagues and the Capulets. In West Side Story, it's very clear that it's these poor, white gang members versus these young, immigrant Puerto Rican[s] — or I should say, they were, of course, United States citizens, but these newcomers to New York. So it gives it an extra modernity that really still, unfortunately, still rings true."

On what hasn't aged well — the dialogue

Moreno: "There are some things that are kind of hilarious, like who in their right minds in the ghetto would say things like, 'Hey daddio, cut the frabba jabba'? ...

"I think some of ... the gang dialogue was dated before we even did the film. In any event, that really is neither here nor there, because I do think it's held up rather well and, you know, how can you question whether Romeo and Juliet holds up? I do understand that the dialogue there was infinitely more beautiful and lyrical. Nevertheless, I think the concept of doing a musical about that and putting it into the 20th century was just brilliant."

On how the choreography advanced the story

Berson: "A lot of the story of this musical is told through dance, and Robbins was just a genius at that. ... He used dance in a very narrative way."

Chakiris: "This idea of narrative is absolutely true. In the usual Hollywood movie musical that I love very much, very often — in fact, most of the time — the plot would come to a certain point, then they would do a musical number, and then the plot would pick up where they left off."

On the movie's broad Puerto Rican accents and dark makeup

Moreno: "There were several things that bothered me as a Hispanic. One was that we all had to be the same extremely dark color. And I remember asking the makeup man one time why the makeup couldn't match our different skin tones. And he really immediately assumed that, one, I did not want to be Latina and, two, that I was racist.

"And not every Puerto Rican in the world, in New York, has a Hispanic accent. And I wasn't thrilled about that, but that was [Jerome Robbins'] choice. He wanted the big contrast between the Jets and the Sharks, and he actually had some of the boys in the Jets dye — bleach — their hair for the contrast. And they had exceedingly pale makeup."