Accessibility links
'Why Read Moby-Dick?': A Passionate Defense Of The 'American Bible' Moby-Dick is a difficult book to read. But the author of a new book about the Melville classic says it's worth it to make the effort. 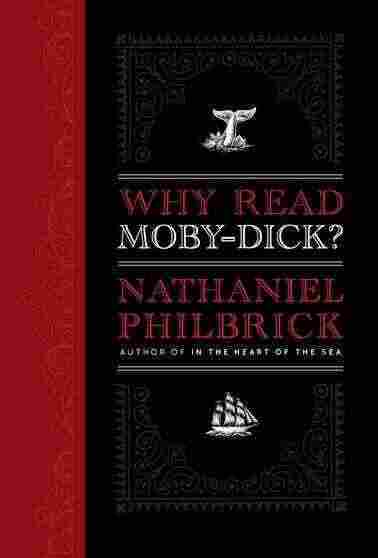 We have a bit of history with Herman Melville's Moby-Dick here at Monkey See. It was the second selection in our I Will If You Will Book Club after Twilight (true story!), and we read the entire thing together in the spring of 2010. Book club vice-president Marc Hirsh and I finished the book in June of that year and declared it a great lesson in "how to pursue a pointless battle to its bitter, violent, inevitable end." By which we meant, in part, reading the book.

Despite the fact that some of the whale anatomy chapters sapped my will to live, I've not been sorry I read it. Whatever else can be said about it, the book is a basic point of cultural reference and a source of jokes and allusions you otherwise won't get. The very ideas of the white whale, the crazed captain, the voyage that really is a trip to crazy ... these things have passed into myth, and it's good to know your own myths. But that's not the only reason to read it, and if you want to hear more reasons to read it, check out today's interview on All Things Considered with Nathaniel Philbrick, author of the new book Why Read Moby-Dick?

WHY INDEED? No, see, that's what Philbrick knows many people are thinking, but to him, this isn't a chore. It's his "favorite book." He refers back to it almost daily. He finds it "full of great wisdom" — and yes, that includes the whale anatomy parts, which Philbrick says are part of a system of what might seem to be meanderings, but are in fact "wormholes of metaphysical poetry that are truly revelatory."

What does he mean by that fairly weighty reference? Moby-Dick, Philbrick explains, published in 1851, was itself born in the pre-Civil-War churn of a very tense American consciousness. While it wasn't a critical or popular success upon publication (critically, he calls it a "great disaster"), Philbrick notes that after World War I, Americans here and abroad came to understand that it contained "the genetic code" for much of what happens in the country where it was written. And he predicts it will cycle back to relevance in difficult times, "whenever we will run into an imminent cataclysm."

It's not that Philbrick doesn't understand that it's a difficult book to read — in fact, he thinks it makes sense to come to it after you've had some life experience and not, one presumes, in the high school and college settings where it's often been required reading. He notes that Melville himself was influenced by midlife encounters with both Nathaniel Hawthorne and the works of Shakespeare. He even acknowledges that the much-discussed clam chowder and whale anatomy sequences require that the reader "have some patience."

But its sweeping story and a level of writing he calls "truly poetic" are, for Philbrick, a combination "built for the ages."