Accessibility links
'Turkish Freakout': A Musical Turkish Delight Milo Miles reviews a compilation of overseas grooves that carry on psychedelic styles long after they were dropped in the U.S. 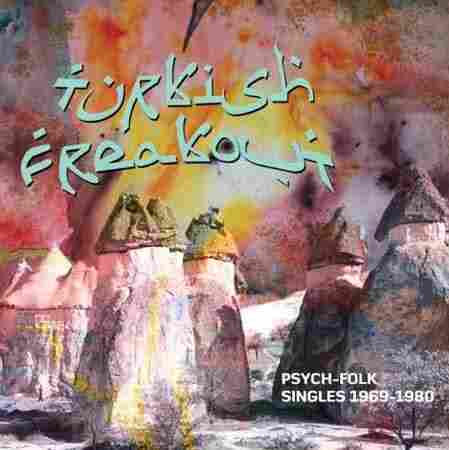 The relentless quest to reissue every decent piece of rock 'n' roll from the '60s and '70s long ago exhausted the U.S. and U.K. warehouses. The new trend for the past couple years is to dig up all sorts of so-called "funk" and "garage rock" from countries around the world. This has worked fine in Africa and South America, though few potent new performers have come to light. The surprise has been Turkey, forever underestimated and overlooked in the Western market.

Of course, Turkey has been a crossroad of East and West for centuries, and though few Americas were aware of it, the '60s and '70s were times of unprecedented cultural and political openness over there, as well. Turkish bands might have been stuck imitating Buddy Holly and The Beatles if a national newspaper hadn't come up with the inspired idea of a career-launching contest. Competing groups would play amplified Western instruments, but would have to sing in Turkish or revamp traditional folk tunes. This was the beginning of what came to be called Anatolian rock. It's never been more handsomely presented than on the two recent anthologies, Turkish Freakout! and Turkish Freakout! 2. It's quite a jolt to hear the first volume begin with what at first sounds like a cover of Frank Zappa's "Help I'm a Rock!"

The Turkish groups were fascinated by the modernity and power of electric guitars, but the grip of psychedelic sounds was more indigenous. It was not attached to drugs or exploring inner space as much as the compatibility of drones, modal forms and the native instruments and percolating percussion already incorporated by adventurous Western rock bands. Turned out the amplified Saz, a traditional stringed instrument, was more apt for rock than the most revved-up sitar. And if a certain British heavy metal band claimed a fascination with Middle Eastern vibes, Turkish performers had a whole lotta love for the same riffs.

The Turkish Freakout! selections were assembled by Bouzouki Joe, a British fellow also known as DJ Remould. These are needle-drop copies of seven-inch singles, the main format in the heyday of Anatolian rock. Bouzouki Joe shows a party-programmer's sense of variety and pace. Also standards of taste — there are no bellydance ringers or careless lapses into pop schlock. Male bandleaders and instrumental hotshots dominate the first Turkish Freakout! album, while female vocals and sweeter arrangements come to the fore on the second volume. The more familiar rock aggression of the first collection makes it the place to begin, but both are equally charming. After all, the joy of swinging cats playing snappy tunes comes through every time.

The military takeover of the Turkish government at the end of the '70s ended a period of cultural ferment and threw a heavy damper over the Anatolian rock movement. A few sites on the web offer more history and performer names — just look up "Turkish progressive music." Modern pop persists in Turkey, but never again as freewheeling as in the Freakout! years. It's all right — the good stuff is there waiting to be discovered and re-discovered. Why not make the acquaintance now?