Accessibility links
In Mexico, Tourism Survives Bloody Drug War The drug war has created an image problem for Mexico. But a record number of visitors are flying into Mexico's resorts, investors are plowing money into new hotels, and most tourist spots remain safe from the country's drug violence. However, fewer Americans are driving across the border. 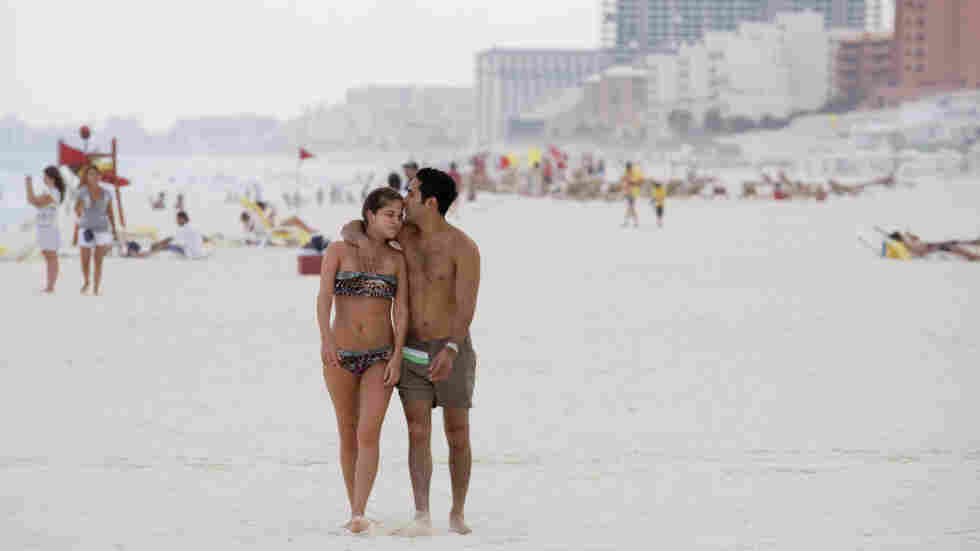 Mexico has launched a publicity blitz to attract more tourists. The vast majority of tourists travel to just one of a half-dozen destinations in Mexico — including Cancun, shown here last year — far from the drug violence.

Yes, the drug war has created an image problem. But Mexico has launched an aggressive publicity blitz to try to attract more tourists, and it seems to be succeeding.

Even President Felipe Calderon is involved in the full court press to tout the wonders, delicacies and marvels of Mexico to potential visitors.

On the PBS program The Royal Tour of Mexico, Calderon serves as the on-camera guide for TV host Peter Greenberg. The president leads a zip-line tour across a rain forest, rappels into a cave, climbs Mayan ruins and snorkels along a coral reef.

Mexico's Ministry of Tourism has also launched advertising campaigns at home and abroad pitching the nation's charms. The country, which has been unable to contain the bloody drug war and where dead bodies regularly get dumped in the streets, wants more people to come for vacation.

Tourism officials point out that a record number of visitors are flying into Mexico's resorts, investors are plowing money into new hotels and most tourist destinations are miles away from the cartel violence.

It might seem that attracting visitors in the midst of the drug war would be a difficult task. The fight against organized crime in Mexico has claimed some 40,000 lives since 2006. Every day there are more stories of severed human heads, shootouts, kidnappings or extortion happening somewhere across the country. 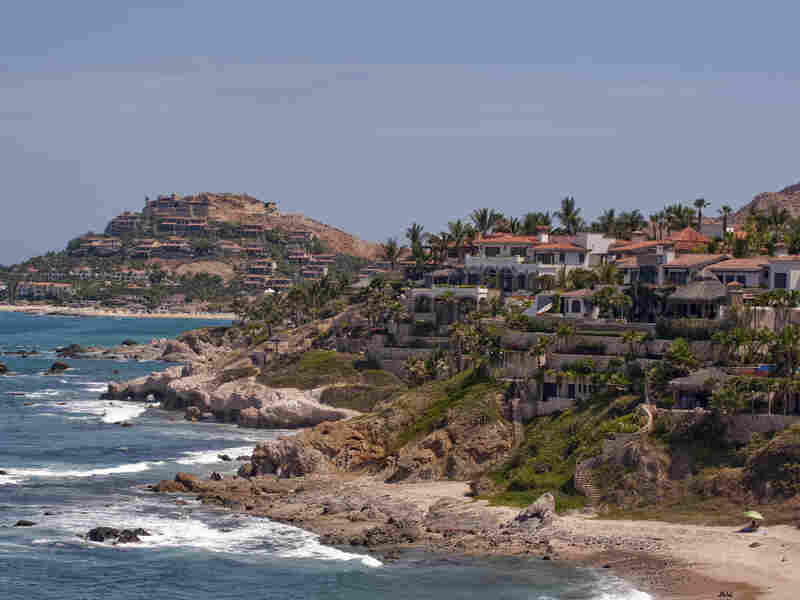 The number of people visiting Mexico — and staying at least one night in places such as Cabo San Lucas, in Baja California state (shown here) — has rebounded this year and is almost at a record level, according to the government. 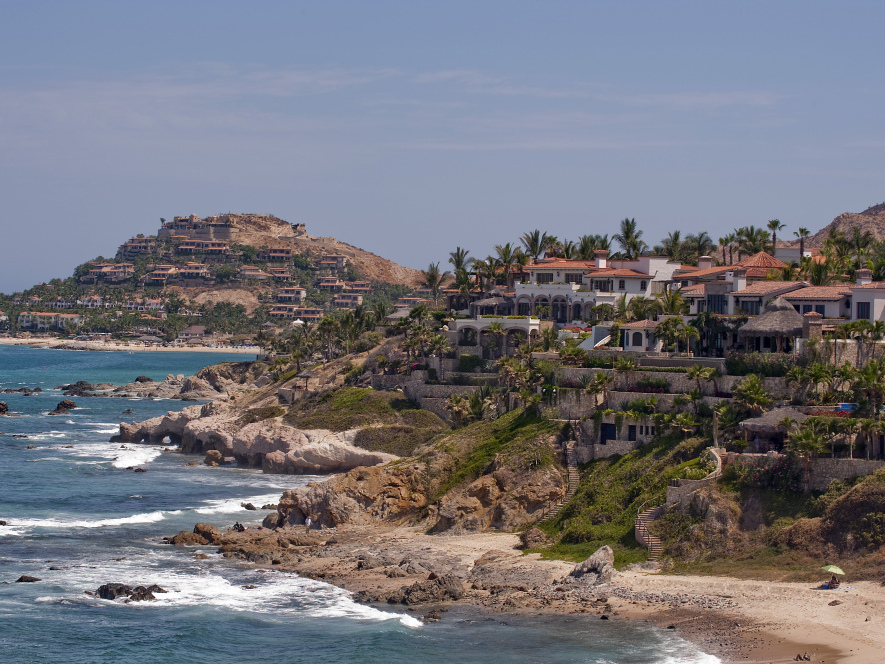 The number of people visiting Mexico — and staying at least one night in places such as Cabo San Lucas, in Baja California state (shown here) — has rebounded this year and is almost at a record level, according to the government.

But the number of people visiting Mexico — and staying at least one night — has rebounded this year and is almost at a record level.

Mexico's secretary of tourism, Gloria Guevara, says the vast majority of tourists come to just a half-dozen destinations in Mexico, which are far away from the drug violence.

"They come to Cancun — that is pretty safe, it's fine. They come to Los Cabos, Vallarta, Huatulco, a few of them. If you include Mexico City and Guadalajara, you have 80 percent of [tourists]. So I would say they can come, visit Mexico and enjoy," she says.

In January, a stray bullet during a shootout in Mazatlan hit a Canadian tourist in the leg, but in general, tourists haven't gotten caught up in the violence. For the most part, the cartels are fighting among themselves and against the state.

The number of tourists flying into Mexico City and Cancun hit new records last year. The overall number of visitors to Mexico, however, is at the lowest level in 15 years. This is because the number of Americans driving across the border into the drug-ravaged north of the country has fallen dramatically.

Feeling The Pinch In Acapulco

The Pacific coast resort of Acapulco has also seen a sharp drop in tourism as criminals battle for control of the city. Between 2006 — when Calderon declared war on the cartels — and now, the number of tourists jetting into Acapulco has fallen by 50 percent.

On a recent afternoon at El Zorrito on the main tourist strip in Acapulco, most of the restaurant's 20 tables are empty. The only people to come in during what should be the lunch rush are a Mexican couple and a guy begging with a baby. 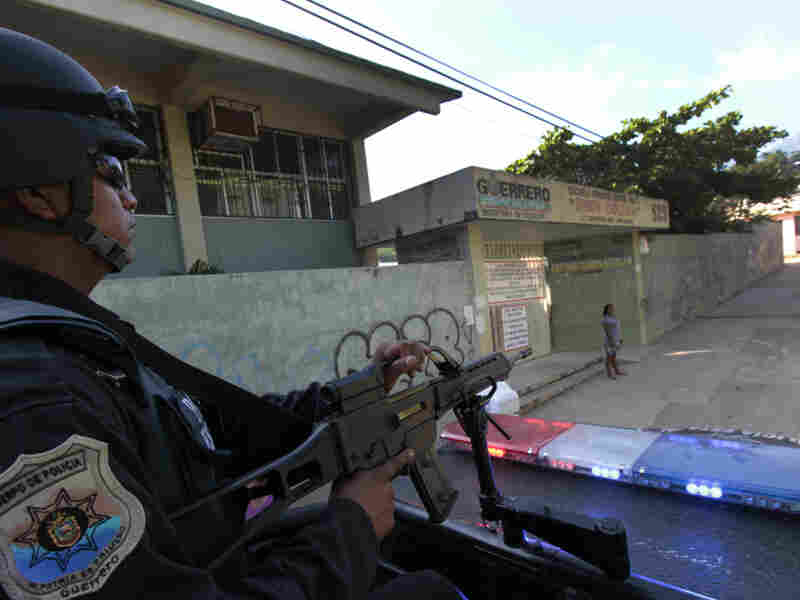 A federal policeman in Mexico patrols the outskirts of Acapulco, Guerrero state, earlier this month. Acapulco has seen a sharp drop in tourism as criminals battle for control of the city. 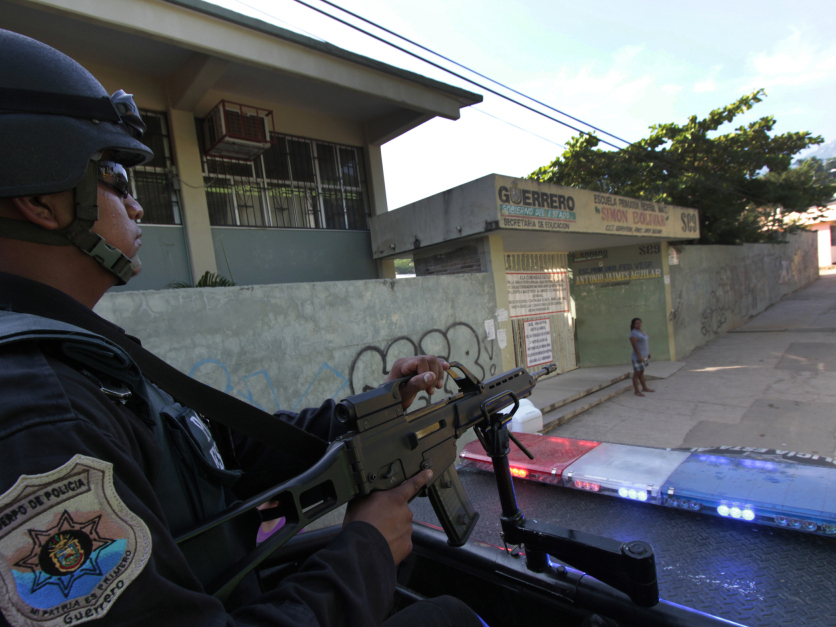 A federal policeman in Mexico patrols the outskirts of Acapulco, Guerrero state, earlier this month. Acapulco has seen a sharp drop in tourism as criminals battle for control of the city.

"There aren't any other sources of employment here in Acapulco," he says. "There aren't other businesses like in Mexico City — like clothes or textiles. You don't have that here. We live off tourism. And if that doesn't come together, we are going down."

Francisco says the violence in Acapulco isn't just affecting tourists. The public school teachers went out on strike over extortion threats by local gangs. Severed human heads have turned up at shopping malls, and gunmen have staged shootouts on the main tourist avenue. Francisco says even locals are afraid to go out at night.

Despite the security problems in Acapulco and along the border, Mexico as a nation still has a lot to offer. Across the country there are bustling markets selling local crafts, unique cheeses and spicy street food.

Mexico has stunning pre-Hispanic ruins, including Aztec and Mayan pyramids. The capital has trendy nightclubs, world-class restaurants and a giant 16th-century cathedral that's slowly sinking into the unstable soil.

Gerardo Murray, the vice president for sales and marketing for InterContinental Hotels Group in Mexico, says the country is much more than a beach destination.

"It's about romantic cities, colonial cities, history," he says.

The vast majority of visitors come from the United States, but Murray says many Americans have grown leery of Mexico.

"We had to be blind not to see that our most important market, the U.S., has its doubts about traveling into Mexico," he says.

Murray, however, says InterContinental is confident that these doubts can be overcome, so much so that the hotel group is opening 49 new hotels in Mexico over the next four years.

"It is clear that we are betting on Mexico, that we trust in Mexico, and of course that we love Mexico," Murray says.

InterContinental, which includes the Holiday Inn and Crowne Plaza brands, is the largest hotel chain in the country.

Other hotel companies, including Marriott, report that despite the security and public relations problems, they also have aggressive expansion plans for Mexico.