Accessibility links
Rejoicing After Israeli Soldier, Palestinians Freed Looking thin and pale, Gilad Shalit returned to Israel after more than five years in Hamas captivity. The 25-year-old tank crewman was freed in exchange for the release of more than 1,000 Palestinian prisoners. Hundreds of those prisoners were freed Tuesday, returning to scenes of jubilation.

Thousands of people jammed the tiny hometown of Israeli soldier Gilad Shalit on Tuesday to celebrate his arrival after more than five years in the captivity of Hamas militants.

Shalit was freed hours earlier in exchange for the release of more than 1,000 Palestinian prisoners in the most lopsided prisoner swap in Israel's history. 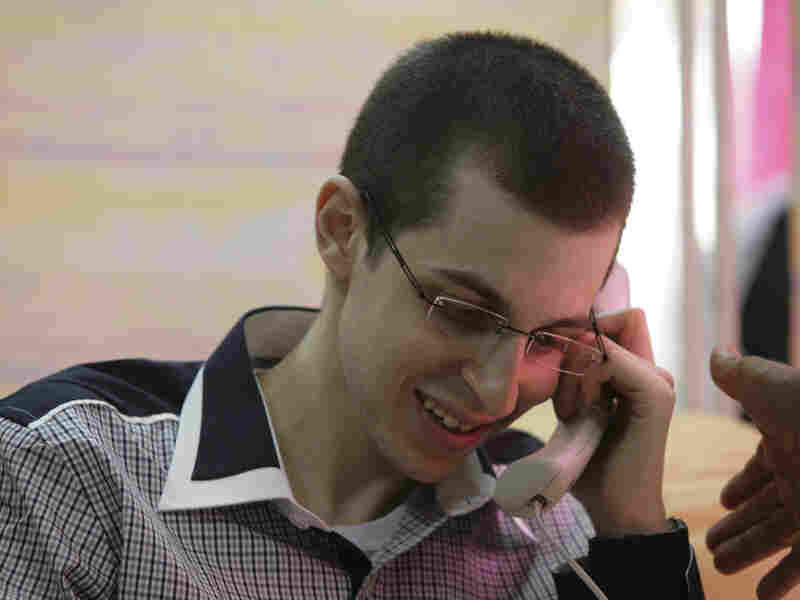 Israeli soldier Gilad Shalit talks to his parents on the phone at an undisclosed location soon after being released from captivity Tuesday. 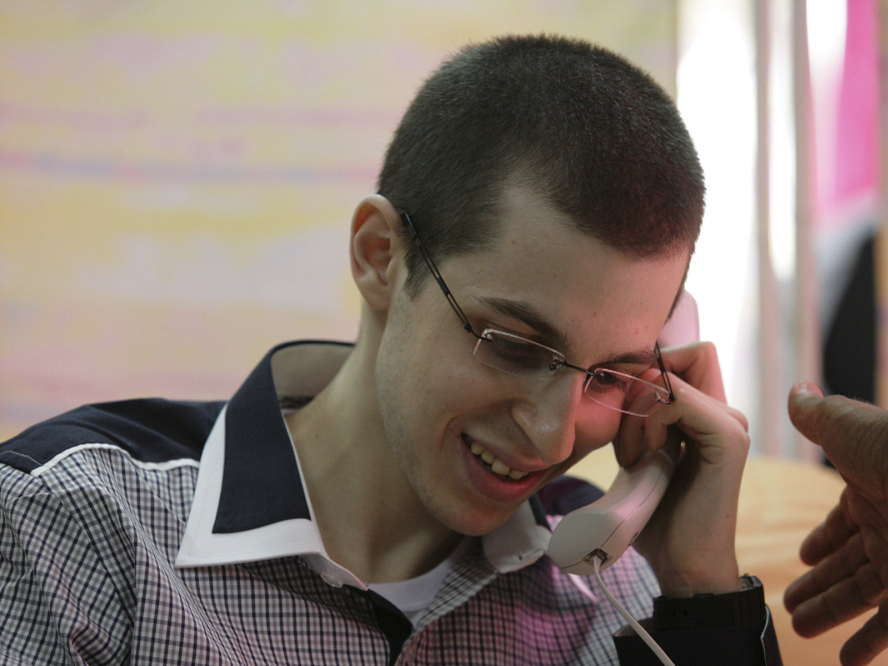 Israeli soldier Gilad Shalit talks to his parents on the phone at an undisclosed location soon after being released from captivity Tuesday.

People mobbed the streets of Mitzpe Hila in northern Israel and stood on rooftops to celebrate the 25-year-old soldier's return. The ecstatic crowd sang songs, waved Israeli flags, popped champagne bottles, embraced and cheered him on. A smiling Shalit briefly waved to the crowd before ducking into his family's house. Police blocked access to the street to give the family privacy.

Jubilant Palestinian families held similar celebrations after 477 Palestinian prisoners, including 27 women, were released from Israeli jails. Some were returned to their homes in the West Bank; others were to be deported to Gaza, Egypt or other Arab states. An additional 550 prisoners are slated to be released in two months to complete the swap, which Hamas deems a major victory.

Shalit was captured in June 2006 during a cross-border raid by Palestinian militants who tunneled under Israel's border with Gaza.

Held For 5 Years, Shalit Will Need Time To Adjust

Looking thin and walking slowly, he emerged from a pickup truck Tuesday under the escort of masked Hamas captors and was handed over to Egyptian mediators who helped arrange his release. Shalit was then transferred to Israeli custody and flown by military helicopter to an air base in central Israel where he reunited with family.

In an interview with Egyptian TV minutes after his release, an ashen-faced Shalit struggled to breathe as he said he had feared he would remain in captivity for "many more years." He said he was very excited to be headed home and that he missed his family and friends.

"I hope this deal will promote peace between Israel and the Palestinians," he said.

Doctors at the Tel Nof military base near Tel Aviv said Shalit showed signs of malnutrition and lack of exposure to the sun, according to an Israeli official.

Israeli Prime Minister Benjamin Netanyahu, who hosted the Tel Nof reunion, said he understood the pain of Israeli families who lost relatives in Palestinian violence but added that Israel's ethos of doing everything possible to bring its soldiers home safely forced him to act.

Netanyahu also issued a staunch warning to the freed militants: "We will continue to fight terror and every released terrorist who returns to terror will be held accountable."

'A Day of Happiness' For Palestinians

Before dawn, convoys of white vans and trucks transported hundreds of Palestinian prisoners to locations in the West Bank and on the Israel-Egypt border. 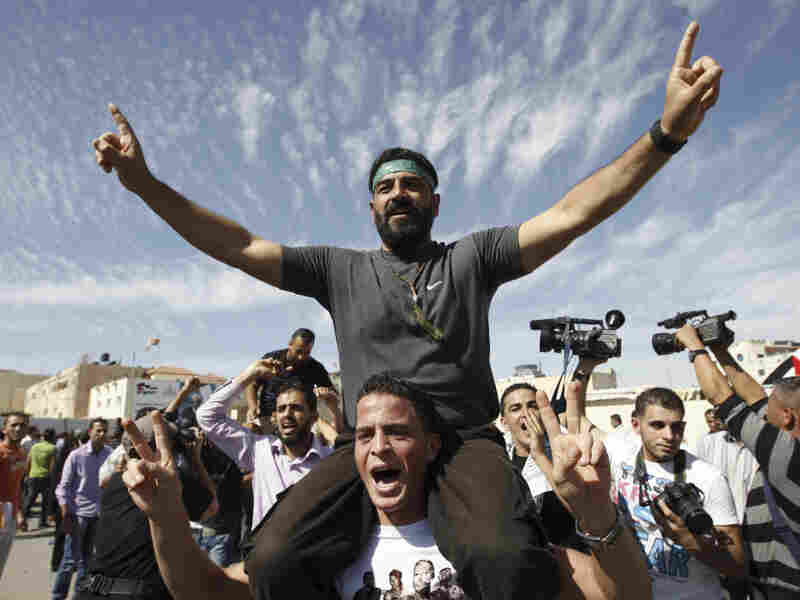 Palestinians celebrate the release of prisoners in the West Bank city of Ramallah. A total of 477 Palestinians were freed Tuesday, with 550 more slated to be released in two months. 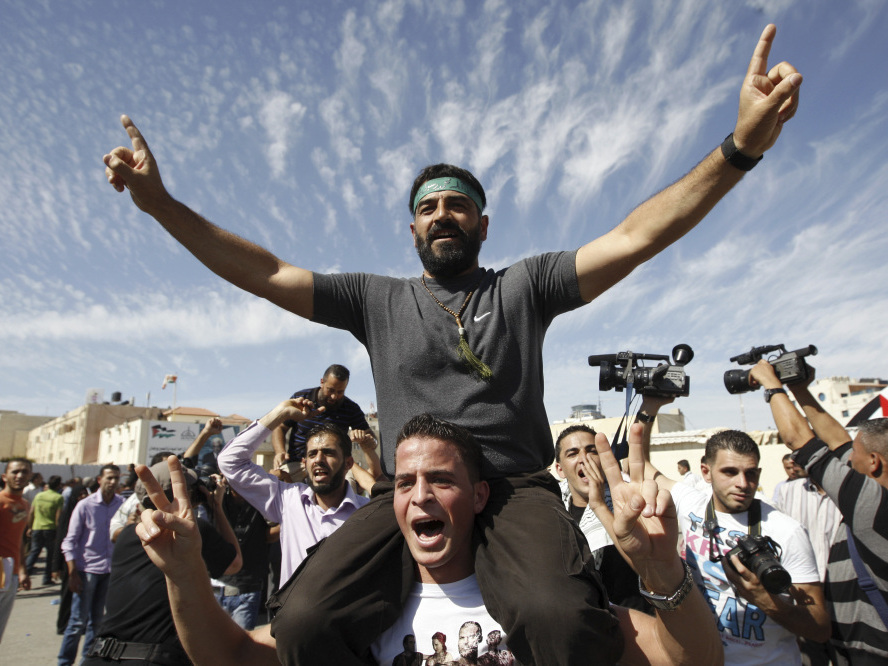 Palestinians celebrate the release of prisoners in the West Bank city of Ramallah. A total of 477 Palestinians were freed Tuesday, with 550 more slated to be released in two months.

NPR's Peter Kenyon, reporting from the West Bank city of Ramallah, said thousands of people had gathered at the Palestinian Authority headquarters, many singing and chanting and waving the green and white flag of Hamas.

"Today is a day of happiness for families, it's a day of popularity for Hamas and a day when everyone seems to be talking about resisting the occupation as opposed to negotiating," Kenyon said. "We're seeing prisoners, some of whom have been in jail for decades, carried on the shoulders of their cousins and nephews. Tearful mothers and sisters are embracing them, and then they are heading home to their villages, where the celebrations will start in earnest."

Fakhri Barghout, 57, was carried on the shoulders of one man and was surrounded by chanting relatives. Sentenced to life for killing an Israeli, Barghouti had spent 34 years in prison, making him one of the longest-serving inmates.

"There will be no happiness as long as our brothers are still in jail," he said. "I can't feel good when I'm leaving my brothers behind."

Barghouti leaves behind a son, Shadi, who is serving a 27-year sentence for involvement in an armed group and at one point shared his father's cell.

"We're so excited we can barely breathe," Mariam Shkair told The Associated Press. She was waiting for her brother, 52-year-old Abdel Latif, who spent 25 years in prison for killing an Israeli soldier. "We are waiting to hug him."

We will continue to fight terror and every released terrorist who returns to terror will be held accountable.

Tempering the jubilation, one Hamas representative noted that 5,000 prisoners remain in Israeli jails, Kenyon said. Some of the freed prisoners also said their top priority was to get their fellow prisoners out and to try to stop the building of Israeli settlements on Palestinian territory.

In the West Bank, released prisoners were taken to the grave of iconic Palestinian leader Yasser Arafat. Palestinian President Mahmoud Abbas greeted them, and several thousand people filled the courtyard outside his headquarters to celebrate.

"We thank God for your return and your safety," Abbas said. "You are freedom fighters and holy warriors for the sake of God and the homeland."

Hundreds of relatives of prisoners had massed at a West Bank checkpoint for a first glimpse at their loved ones, but buses carrying the prisoners were instead driven directly to Abbas' headquarters.

We thank God for your return and your safety. You are freedom fighters and holy warriors for the sake of God and the homeland.

Clashes erupted between about 200 young Palestinians at the checkpoint and Israeli soldiers several hundred yards away, after the families were told they had waited in the wrong place. Israeli troops fired tear gas and Palestinians threw stones for about half an hour. Some of the young men climbed atop a separation fence near the checkpoint and draped it with flags of Hamas and Abbas' Fatah movement.

The exchange, negotiated through Egyptian mediators because Israel and Hamas will not talk directly to each other, went ahead despite criticism and court appeals in Israel against the release of the prisoners. Nearly 300 of them were serving lengthy sentences for involvement in deadly attacks.

The swap involves a delicate series of staged releases, each one triggering the next. The Red Cross and Egyptian officials are involved in facilitating the movement of prisoners.

Israel and Hamas have held numerous rounds of talks through German and Egyptian mediators. But officials on both sides have said that conditions prompted in part by the recent Egyptian revolution helped drive them to an agreement. Both sides have been eager to have good ties with the new Egyptian leadership, which brokered the deal.

In Israel, where an intense media campaign to free Shalit made him a national symbol, all local radio and TV stations held special live broadcasts Tuesday, following every step of the exchange.

His father, Noam Shalit, has become a ubiquitous figure in Israel since his son's capture and led a massive campaign to press the government into bringing the 25-year-old home.

In 1973, Zeifa was captured by the Egyptian army and held for six weeks. He told NPR that the experience was traumatic in every way imaginable — and that his release from captivity was just as difficult.

"You have the trauma of captivity and then the trauma of returning to normal life. To return to freedom is a shock, as well," Zeifa said in Hebrew. "In the case of Shalit, where for years he was not in control of anything — what he ate, when — to suddenly be a free man again is something that is not that easy to adjust to."

With reporting from NPR's Peter Kenyon in Ramallah, West Bank, and additional reporting from Sheera Frenkel in Mitzpe Hila, Israel, and Linda Gradstein in Jerusalem. Material from The Associated Press was used in this story.