Accessibility links
With Romney In Race, Mormon Church Steps Up Ads As former Massachusetts Gov. Mitt Romney tries to overcome unease about his religion in his bid for the GOP nomination, the Church of Jesus Christ of Latter-day Saints has taken out billboards and TV ads in 12 new cities. The ads proclaim "I'm a Mormon" and aim to dispel misconceptions about the church.

With Romney In Race, Mormon Church Steps Up Ads

With Romney In Race, Mormon Church Steps Up Ads 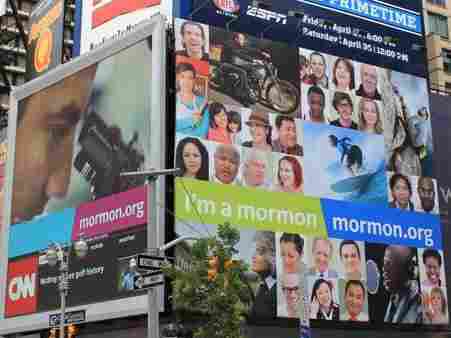 An "I'm A Mormon" billboard in New York's Times Square in June.The LDS church expanded the ad campaign to 12 new cities within the last week.

Just as former Massachusetts Gov. Mitt Romney tries to overcome unease about his Mormon faith in his bid for the Republican presidential nomination, a new ad campaign promoting the religion is drawing attention.

"I'm a Mormon" billboards and television commercials aimed at improving the religious group's public image have surfaced over the past week in states almost certain to be battlegrounds for next year's presidential contest.

But don't expect to see Romney in a commercial proclaiming "I'm a Mormon." The Church of Jesus Christ of Latter-day Saints, whose members are commonly called Mormons, says its ad campaign has nothing to do with the candidate. (Federal law prevents nonprofit organizations such as the LDS church from participating in political campaigns.)

"It's really not related," Latter-day Saints spokesman Dale Jones says. "We've been doing media since the '70s. This is our latest iteration. ...The idea is to get people to see who we are, rather than who people say we are."

Negative perceptions in America about the Mormon church have persisted virtually since its founding, in 1830, by Joseph Smith.

Last year, three out of every four Protestant pastors in America said they believe Mormons aren't Christians, according to a survey of 1,000 ministers conducted by Lifeway Research, a unit of the Southern Baptist Convention. 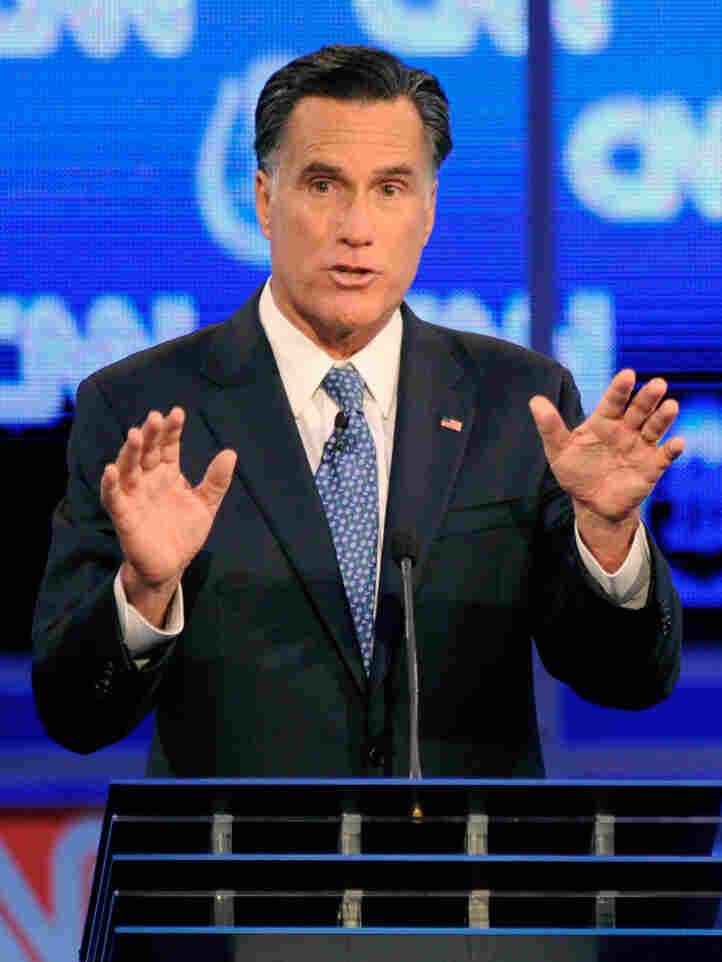 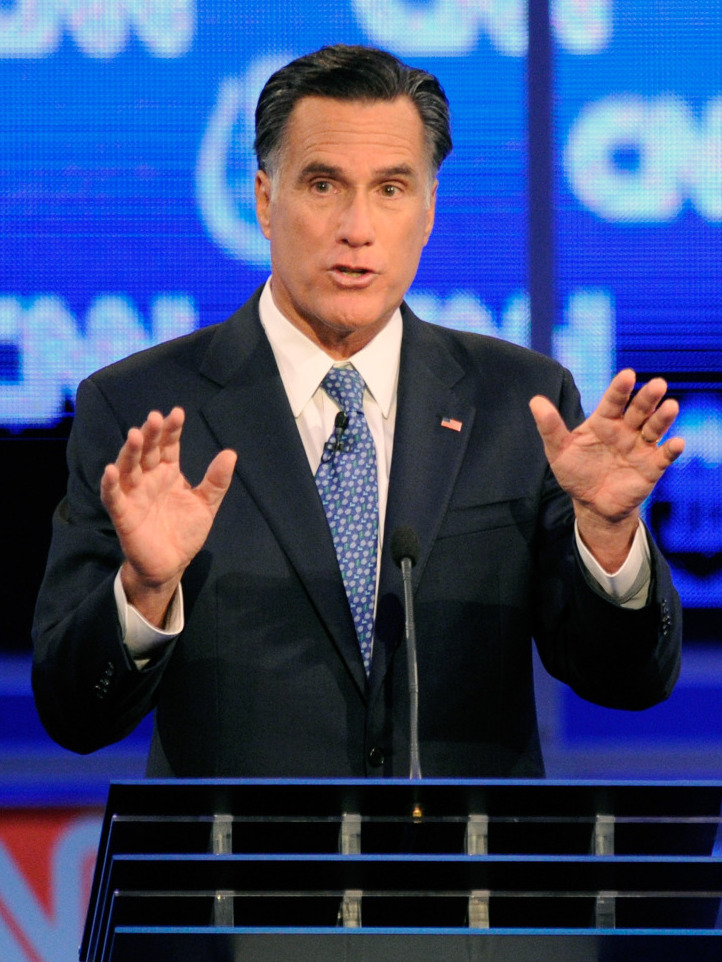 A Challenge To His Ambitions

Romney's religious faith has long posed a challenge to his political ambitions. His first presidential bid, in 2008, withered not only because of voters' doubts about his conservative credentials, but also because of widespread concerns about his faith held by conservative Christians, who form a large and critical voting bloc in Republican primaries.

Earlier this month, at the conservative Values Voters Summit in Washington, a prominent Baptist minister from Texas took a swipe at Romney and his religion while praising rival presidential candidate Rick Perry, governor of Texas. The Rev. Robert Jeffress, who has expressed his support for Perry's candidacy, told reporters that Mormonism "has always been considered a cult by the mainstream of Christianity."

When the issue came up in Tuesday night's GOP debate in Las Vegas, Romney offered perhaps his most vigorous defense yet of why his faith should not matter at the ballot box:

That — that idea that we should choose people, based upon their religion, for public office is what I find to be most troubling, because the founders of this country went to great length to make sure, and even put it in the Constitution, that we would not choose people who represent us in government based upon their religion; that this would be a nation that recognized and respected other faiths, where there's a plurality of faiths, where there was tolerance for other people and faiths. That's bedrock principle.

But the issue is clearly on voters' minds. A Pew Research Center/Washington Post survey released Tuesday asked Americans to describe Romney in a single word. They most frequently offered "Mormon."

Pew has tracked voter attitudes about religion for several years.

"The same groups that expressed reluctance about voting for a Mormon candidate in 2007 are expressing reluctance today — and those are white evangelical Protestants. In the early states, where evangelicals make up a pretty high percentage of a primary electorate, it becomes a factor," says Carroll Doherty, associate director for the Pew Research Center.

There are other signs that some voters have lingering concerns about Romney's religion.

By comparison, in an NBC News/Wall Street Journal poll taken in 2007, as Romney embarked on his previous presidential run, only 39 percent of Republican primary voters felt comfortable with his religion. Another 26 percent said they weren't comfortable.

In last week's poll, the comfort level among all Americans, regardless of their political affiliation, was 47 percent. That suggests Romney still has to win over the broader public, which will come out for the general election.

The Latter-day Saints' own research has found that more than half of Americans "know little or nothing about us," Jones says.

In response, the church crafted the ad campaign and established the informational website Mormon.org. The church hopes the campaign will dispel misconceptions, emphasize that the church is Christian and spark discussions about the faith between members and nonmembers.

Just like with John F. Kennedy's Catholicism, the first time you have a major national candidate from a certain faith — really, Kennedy was the first Catholic since Al Smith in 1928 — it raises some concerns. In the past a candidate's religion was far more important than it is now.

The church declined to say how much it is spending on the campaign. Television spots are airing on daytime and evening programs, including news shows.

The church's previous ad campaigns focused on promoting families. This is the first effort that promotes individual members, portraying them as everyday people. The campaign showcases profiles of a diverse mix of young, active and vibrant-looking Mormons, rather than the traditional image of missionaries wearing white button-down shirts and riding bicycles. The ads make no mention of the LDS theology.

Ads steer viewers to the website, which allows visitors to look up Mormons by name, gender, race or ethnicity who "share your personal experience."

The ads began airing in 2010 in nine cities, such as St. Louis, Pittsburgh, Colorado Springs and Jacksonville, Fla. In the past week, the campaign was expanded to 12 cities, including Phoenix; Atlanta; Denver; Spokane and Seattle, Wash.; San Antonio; Omaha and Lincoln, Neb.; and Indianapolis, Fort Wayne and South Bend, Ind. Jones says the cities were chosen because each has significant populations of Mormons.

The ads are scheduled to run until spring 2012, by which time the Republican primaries could be reaching a climax.

Several of the states where the ads are airing are projected battlegrounds for both the Republican primaries and the general election next year. But the church says it took steps to avoid any appearance of political partiality.

"We made it a point to stay away from states that had early primaries," Jones says. "That goes back to being politically neutral."

From 9-9-9 To Immigration: Fact-Checking The GOP's Nevada Debate

The LDS church counts more than 14 million members worldwide, and more than 6 million in the U.S. It is ranked as the fourth-largest denomination in America, according to the National Council of Churches.

LDS membership is most abundant in the West, particularly Utah, Nevada, Idaho, Colorado and California, and officials say the numbers are growing steadily in all parts of the country.

Membership is thinnest in the South, also known as the Bible Belt for its large population of evangelical Christians, who have traditionally mistrusted Mormonism.

As more prominent Mormons take on higher profiles, LDS officials hope that mistrust will fade away. Senate Majority Leader Harry Reid, D-Nev., and Sen. Orrin Hatch, R-Utah, are Mormons. So is rival Republican hopeful Jon Huntsman, the former governor of Utah, who continues to campaign in virtual obscurity as an also-ran in the polls.

Political observers say Romney's bigger problem may go far beyond his religion: He is still having trouble convincing primary voters of his conservative bona fides on social issues. Conservatives haven't forgotten the moderate stances he held on abortion and gay rights during his failed 1994 bid for a Senate seat in Massachusetts, or that he'd been a registered independent before entering the race.

And, of course, he still has to answer for the state health care law he signed as governor of Massachusetts. The plan was a template for President Obama's plan, reviled by conservatives. (In the Pew Research Center/Washington Post survey, the second- and third-most commonly used words to describe Romney were "health care" and "flip-flop.")

A Romney campaign spokeswoman declined to comment for this article.

But the fact that this is Romney's second presidential bid may help him overcome some of these obstacles.

"There is a greater familiarity with him, with the fact that he's been on the national scene longer now," says political scientist Alan Abramowitz of Emory University in Atlanta. "Just like with John F. Kennedy's Catholicism, the first time you have a major national candidate from a certain faith — really, Kennedy was the first Catholic since Al Smith in 1928 — it raises some concerns. In the past, a candidate's religion was far more important than it is now."

Abramowitz says doubts among conservative Republicans explain Romney's inability to rise in most polling, in which he has remained in the range of 23 percent for a few months.