Accessibility links
Oil Skimmer Nets $1 Million X Prize A breakthrough in oil cleanup technology allows crews to skim spilled oil off the water's surface at a much faster rate. The new device wasn't developed by Exxon, BP or any of the major oil companies — it's the work of Elastec/American Marine, based in Illinois.

A breakthrough in oil cleanup technology allows crews to skim spilled oil off the water's surface at a much faster rate. The new device wasn't developed by Exxon, BP or any of the major oil companies — it's the work of Elastec/American Marine, based in Illinois. And the design won the company a rich award from the X Prize Foundation.

Oil is attracted to plastic. And water is not. That, in essence, is the basis of Elastec's new skimmer.

It's huge, about the size of a large U-Haul truck. And it looks something like a giant abacus. It has 64 grooved plastic discs, arranged in rows, with a scraper along the top.

"That's the elegance of this machine. It sounds like it's just so basic, but it picks the oil off, puts it in a trough and we pump it away, and that's all there is to it," says Team Elastec project manager Don Johnson. "And it does it at a nearly 90 percent efficiency rate."

Elastec was inspired by a gauntlet thrown down by the X Prize Foundation, which organizes privately funded competitions to spur technological advancement. It's known for awarding a $10 million prize in 2004 to build a privately funded spacecraft.

Funded by activist Wendy Schmidt, who is married to former Google CEO Eric Schmidt, the Oil Cleanup X Challenge dangled a million-dollar purse to any company that could drastically increase the speed that oil is skimmed from water.

The industry standard is for oil skimmers to remove 1,100 gallons of oil per minute. The X Challenge set the bar at 2,500 gallons per minute.

"It's astounding, what they were asking," Johnson says. "It's like taking one of your fastest cars, you know, and doubling the speed of the fastest car and then adding a little more and saying, 'OK, go for it.' "

And Elastec succeeded. Its design removed oil at nearly twice the goal.

X Prize Foundation CEO Peter Diamandis says it was time for the oil cleanup industry to evolve — and that his group's cash prize helped bring it about.

"The oil cleanup technology has pretty much been the same for the last 20 years," he says. "Between the Exxon Valdez and the BP oil spill, nothing has really changed. And we have technology that came out of the Wendy Schmidt Oil Cleanup X Challenge that is literally four times better than what has existed for 20 years." 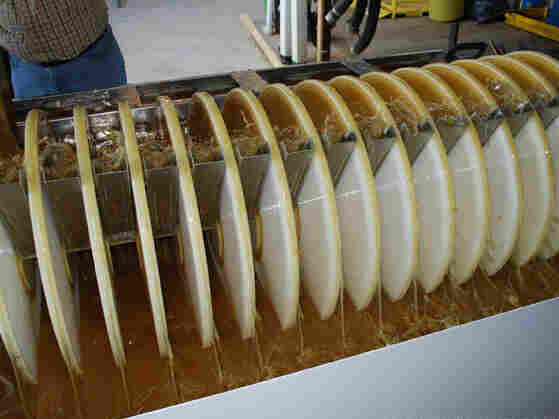 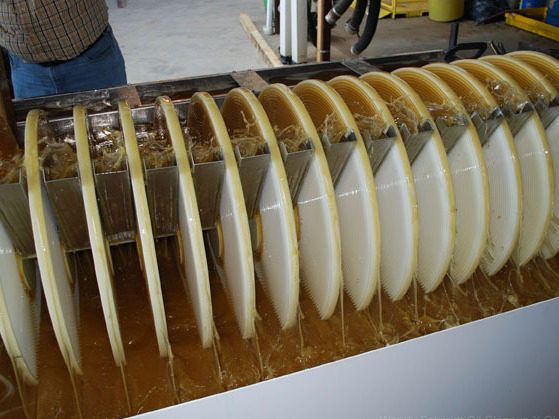 Demonstrating the winning idea, Elastec CEO Donnie Wilson hand-cranks a plastic disc that is half-submerged in a tank of oil and water. Oil adheres to the plastic disc's grooved surface. As the disc turns, the oil is scraped off and flows into a trough that separates it from the water.

"We had this on the drawing board. This was certainly the incentive to get our best ideas out, which we thought was this design," Wilson says.

The skimmer wouldn't help much on a massive spill like the one last year in the Gulf of Mexico. It's suited to rapidly remove oil during an event like a tanker spill. And it could greatly limit the damage to fragile ecosystems.

Carmi, Ill., feels like it's a million miles away from the Gulf, but inland spills are what put Elastec's million-dollar idea into motion.

Elastec has grown to about 150 employees, and most of those jobs are in Carmi.

Elastec's X Prize success is likely to change this patch of rural Illinois. The company is now getting orders from across the globe — and will have to hire more workers to meet demand for its new X Prize-winning device.