Accessibility links
Opponents Say S.C.'s Voting Law Unfair For The Poor This year, South Carolina passed a law requiring voters to show a government-issued photo ID at the polls. It still needs approval from the Justice Department. But voting rights advocates say it will be a burden for the poor and elderly who don't have birth certificates, or who have certificates with misspelled names or wrong dates. 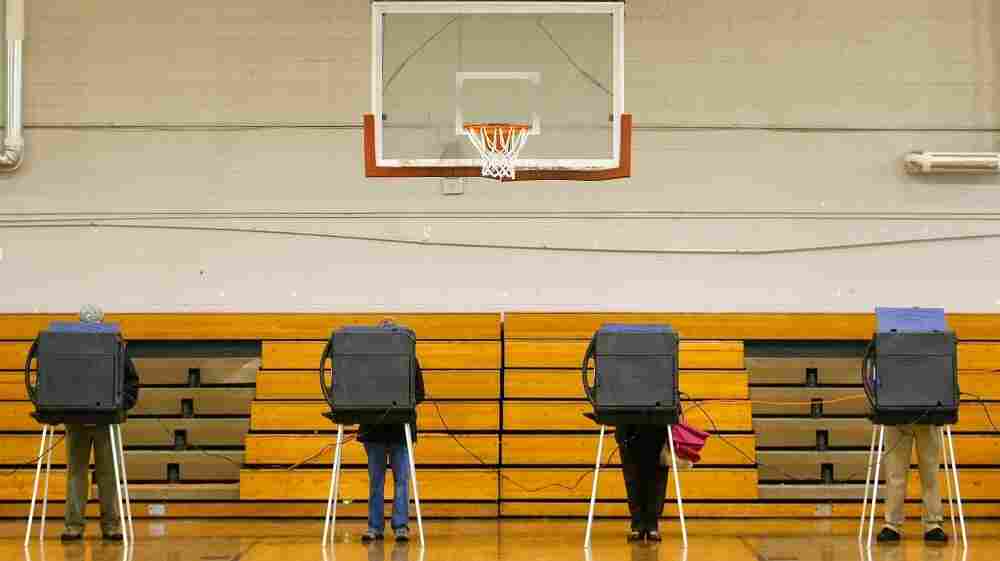 Voters stand at the voting booths inside the gymnasium at West Ashley Middle School in Charleston, S.C., in January 2008. This year, South Carolina passed a law requiring voters to show a government-issued photo ID at the polls. It still needs approval from the U.S. Justice Department, but it has voting rights advocates worried.

South Carolina is one of several states that passed laws this year requiring voters to show a government-issued photo ID at the polls. The South Carolina measure still needs approval from the U.S. Justice Department to ensure that it doesn't discriminate against certain voters.

Voting rights advocates say the requirement will be a big burden for some, especially the elderly and the poor, who can have a difficult time getting a photo ID — even in this day and age.

Take the case of sharecropper Willie Blair of Sumter, S.C. Blair, 61, has used that name all his life — it was given to him by his stepfather. It's also the name he had on his Social Security card.

But it turns out that his birth certificate says his real name is Willie Lee McCoy.

This was never a problem, until he recently tried to get a photo ID so he could receive Social Security benefits and vote if the new law goes into effect. 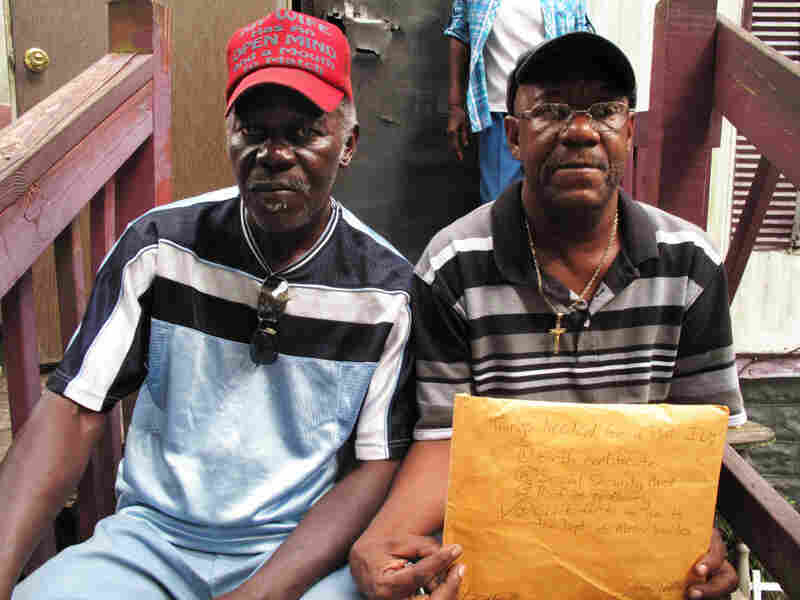 Sharecropper Willie Blair (left) of Sumter, S.C., has used that name all his life, and it was on his Social Security card. But his birth certificate says "Willie Lee McCoy." Blair never went to school and is illiterate. His cousin Raymond Evans (right) tried to help him get an ID so Blair could vote; but Evans says it was a frustrating process. 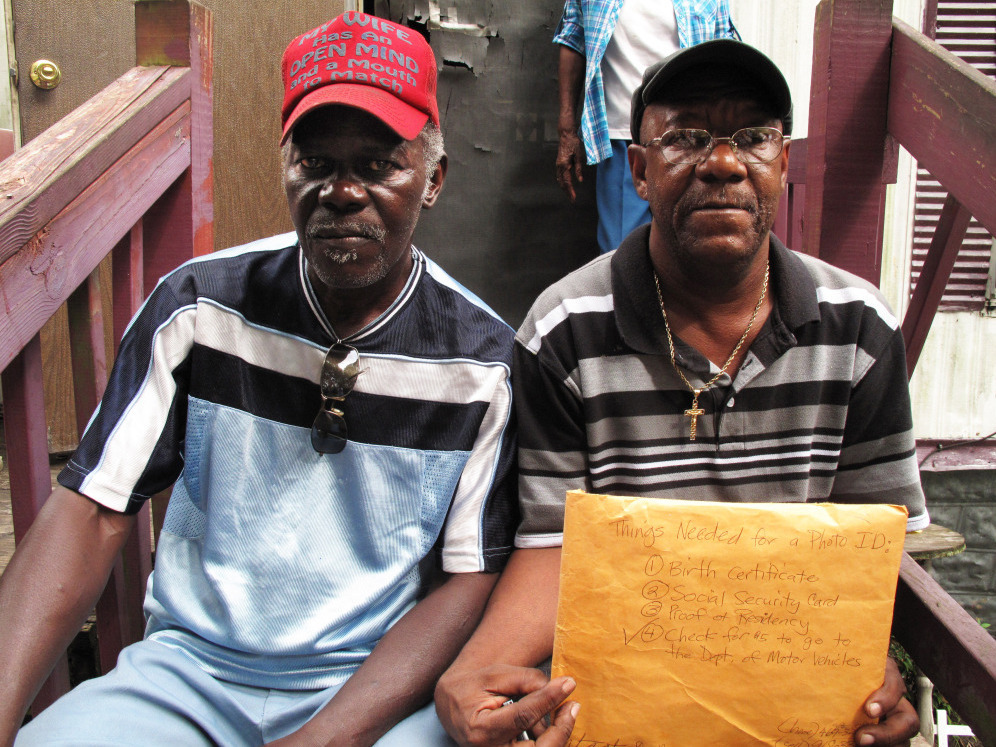 Sharecropper Willie Blair (left) of Sumter, S.C., has used that name all his life, and it was on his Social Security card. But his birth certificate says "Willie Lee McCoy." Blair never went to school and is illiterate. His cousin Raymond Evans (right) tried to help him get an ID so Blair could vote; but Evans says it was a frustrating process.

"And I have been up and down and around and around," says Blair's cousin, Raymond Evans.

Blair never went to school and is illiterate. So Evans has been helping him through a bureaucratic maze that would challenge even the most highly educated.

Blair's first hurdle was finding out that he needed a photo ID to get a copy of the birth certificate that he needed in order to get a photo ID. Instead, he had to track down copies of his children's birth certificates and numerous other documents to prove his identity. He also had to get the Social Security Administration to change the name it had for him in its files.

Earlier this month, Evans was still trying to figure out how Blair could show proof of residency, which is also required to get a free photo ID from the state's Department of Motor Vehicles. Blair lives with his aunt in a small trailer on a dirt road in Sumter. Everything is in her name.

"He don't have any income to pay any bills," Evans says. "He don't own a bank account because he don't have ID."

A Smooth Process At Voting Time?

Brenda Williams, a local physician who has spent countless hours and thousands of dollars trying to help people — mostly low-income African-Americans — to get IDs says the problem is "widespread."

She says she's seen it all: no birth certificates, certificates with misspelled names and incorrect birth dates, certificates that only say things like "Baby Boy Montgomery." Many in this state were born years ago at home, with the help of a midwife, when paperwork wasn't a big deal, she explains.

"So here we have a gentleman — decent, honest American citizen — [who] has had to jump through hoops of fire in order to get a photo identification so that he could vote," says Williams.

And why, she asks? Sponsors of voter ID laws here and elsewhere — mostly Republicans — say such laws are needed to make sure that those who come to the polls are who they say they are.

But according to Chris Whitmire, a spokesman for the South Carolina State Election Commission, voter fraud has not been a problem.

"We have no record of or any confirmed case of that in South Carolina in recent history," he says.

Still, Whitmire thinks that those without ID — estimated to be more than 200,000 registered voters statewide — will be able to get it fairly easily, if and when the Justice Department gives the OK. County election offices plan to provide free photo registration cards to those who come in and verbally confirm their date of birth and Social Security number.

Whitmire admits that for those who live a long distance away, it's a hurdle. But, he adds, "It's not a brick wall. I haven't seen the case where that person will be disenfranchised and they have no option to vote."

He also notes that those without ID can always vote by absentee ballot.

Brenda Williams is skeptical that things will work that smoothly. The people she helps have faced many hurdles in their lives.

DMV Says It Has 'Bent Over Backwards'

Later, she joins several other people in song outside a trailer home in nearby Mayesville. Thelma Hodge, who lives there, just received her birth certificate in the mail after trying for five years. She was one of 11 children in her family born with a midwife, and she never had a birth certificate. Hodge always thought she was born in 1942, but her new certificate shows that it was 1941. Still, she's overjoyed. Among other things, she'll be able to vote.

While she's at Hodge's home, Williams calls out to a young man walking by. She asks him if he's registered to vote and has a photo ID from the DMV. He says no, and says he's been trying to get a photo ID, but has been having problems because his name is spelled differently on his birth certificate and his Social Security card.

Williams gives him the name of a lawyer who'll handle the case for free.

Last month, the state offered to drive anyone who needed a ride to the DMV to get their photo ID. Only 21 people took advantage of the one-day offer. Williams says that's because transportation isn't the issue.

But Kevin Shwedo, executive director of the state DMV, says he believes the ID problem isn't as widespread as many people think. He says he wants to make sure that everyone who needs a credential gets one.

"And where we've got those individuals that just need a warm body to help them, we have bent over backwards to try to accommodate them," he says.

In fact, after he heard about the case of Willie Blair, Shwedo sent DMV workers the next day to his aunt's trailer and had her sign an affidavit that Blair lived there so he could get his ID. He got it three days later.