Accessibility links
'Catechism Cataclysm': A Man Of The Cloth, Fraying A disenchanted priest takes a sabbatical, embarking on canoeing trip with an ex-heavy metal guitarist once engaged to his sister. They're joined by two young Asian women who call themselves Tom Sawyer and Huck Finn. And then things gets weird. 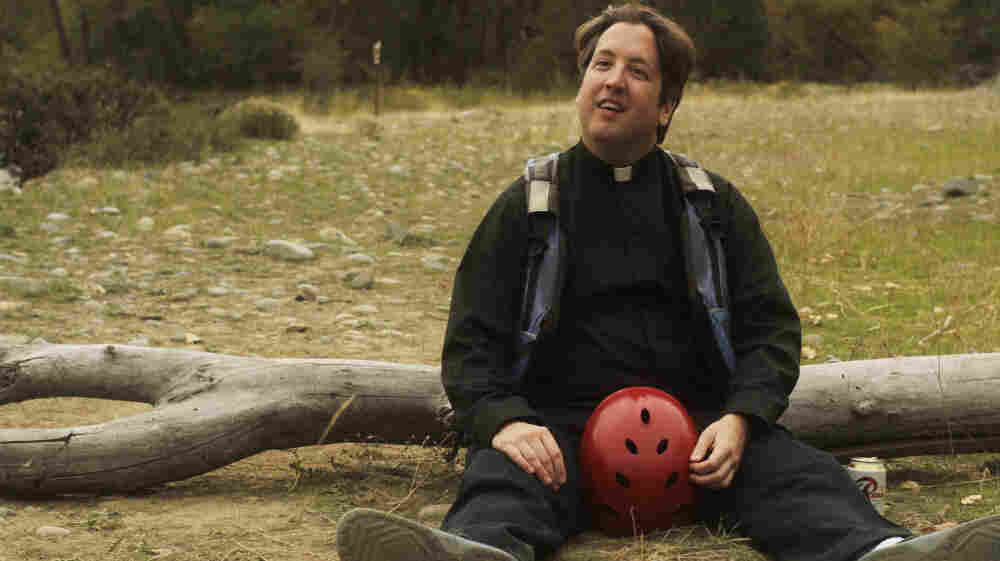 Roamin' Collar: A priest (Steve Little) loses his Bible — but finds a new perspective — an a canoe trip with a former schoolmate in Todd Rohal's The Catechism Cataclysm.

From 'The Catechism Cataclysm' - 'I Dropped It'

From 'The Catechism Cataclysm' - 'I've Corrupted A Priest'

In the beginning of The Catechism Cataclysm, a deeply eccentric and mildly surreal indie comedy, a young priest tells his congregation a story. It's an ironic little yarn about an old woman who leaves the grocery store, catches a bunch of hooligans breaking into her car and draws a gun on them ... only to discover later that she had parked in a different spot, and they just had a similar-looking ride.

"And the moral of the story is," the priest concludes, "if you're going to have a senior moment, make it a memorable one." The parishioners look confused. "What does that have to do with Deuteronomy?" one asks. "Where do Christ's words come into this story?" asks another. The priest gives it some thought — very little thought, really — and shrugs. It was just a funny story. Why should it have any more significance than that?

Why indeed? Writer-director Todd Rohal has an offbeat sensibility — as the titles to this and his 2006 debut feature, The Guatemalan Handshake, might suggest — and it becomes clear, over time, that Rohal's connection to Father William, his wayward man of the cloth, goes beyond mere empathy. He likes telling funny stories, too, and there doesn't necessarily have to be a moral to them. Digging for religious or philosophical profundities in The Catechism Cataclysm feels akin to panning in depleted waters: Each little nugget of wisdom turns out to be fool's gold.

Still, there are many pleasures in Rohal's sweet-spirited little confection, starting with Steve Little's winning performance as Father William, a bumbling naif whose emotional development appears to have stopped in pre-adolescence. Best known for playing sycophantic sidekick to Danny McBride's fallen relief pitcher on HBO's Eastbound and Down —a position akin to gum on dirty cleats — Little plays William with a childlike openness that's utterly disarming, no matter how exasperating his also-childish petulance gets. William knows so little about the world that anything seems possible, and Rohal takes full advantage.

After watching as William's parable drives away his already diminished flock, his superior at the church gently encourages him to go on sabbatical in order to find "the truth." So William looks up an old high-school acquaintance named Robbie Shoemaker (Robert Longstreet) and badgers him into going on an afternoon canoe trip. Robbie doesn't remember William at all; he's just finally relented to the constant barrage of emails. But William has secretly admired Robbie for years, remembering him as a master storyteller and righteous rock-and-roller.

As William and Robbie head downstream, a half-affectionate, half-toxic odd-couple chemistry starts to develop, with the grating, dim-witted priest fraying every last nerve in his idol's body. But Robbie is the closest thing to an audience surrogate among Rohal's gallery of eccentrics, and William has a way of wearing him (and us) down. After all, when your fiction never left your journal and your Jimmy Page dreams amounted to nothing more glamorous than a spotlight-operator job on a road crew, you cherish your one groupie.

When the buddies get stranded on the river and seek help from two secretive Japanese girls and their silent African-American escort — referred to as "Tom Sawyer," "Huck Finn" and "Jim," respectively — The Catechism Cataclysm takes a turn toward the surreal and never looks back. Credit Rohal for going way out on a limb in the final third, but it's the fundamentals of two well-wrought, well-played characters that make the film's bizarre flights of fancy possible.

The Catechism Cataclysm takes some juvenile detours (the priest loses his Bible in a backed-up toilet), and its allusions to Mark Twain and John Steinbeck are puddle-deep, but William and Robbie's adventure has a shaggy-dog charm that's hard to resist. There may not be a lesson in it — certainly nothing William can take back to his congregation — but their friendship is real. And that's enough.