Accessibility links
'Martha Marcy': By Any Name, A Sweet Debut Elizabeth Olsen is spellbindingly mercurial as a paranoid young woman struggling to reconnect with her family after leaving an abusive cult. (Recommended) 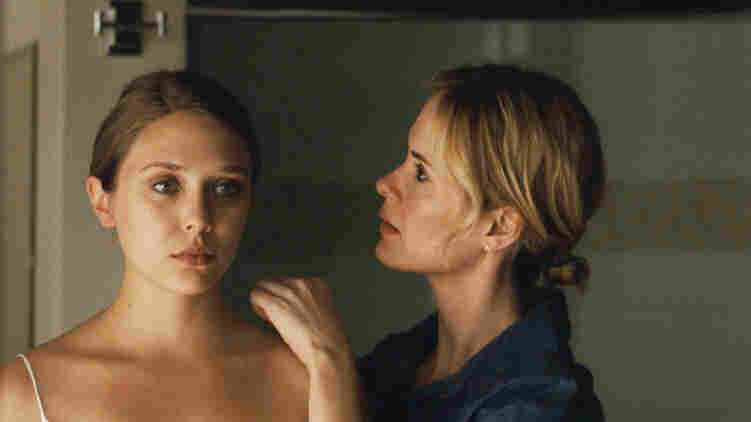 Elizabeth Olsen (left) plays Martha — or is she Marcy? May or Marlene? — a strained and strange young woman who has fled a cult's rural commune to take refuge with her sister (Sarah Paulson).

Elizabeth Olsen, the younger sister of famous fashion twins, has enormous translucent eyes that can turn as blank as a Vogue model's, set in a pale oval face straight out of a medieval painting. It's a face both ancient and hyper-modern, made for rapture and disillusionment — just the ticket for a story of imprisonment as old as a fairy tale, set this time among a quasi-hippie cult and at a posh Connecticut summer home.

'The Past Doesn't Matter'

'Building In The Gun'

Martha Marcy May Marlene, a confidently spooky indie debut written and directed by Olsen's fellow NYU alum Sean Durkin, begins where most such stories end, with the young woman's escape from a ratty commune in the wilds of upstate New York. For now her name is Marcy, and her traumatized features suggest a victim who has had the stuffing knocked out of her. Yet there's energy in her, and a vague unease at having to call on an estranged sister (Sarah Paulson) for help. That discontent balloons into a diffuse anxiety peppered with bursts of rage when Marcy settles into the lakeside home where the sister and her overworked husband (British actor Hugh Dancy, all hard edges in a rail-thin new body) are trying to relax and start a family.

They're out of luck. For all the tranquility of this upmarket idyll, the unexpected house guest's incrementally weird behavior freaks the couple and threatens to make nervous wrecks out of them, too. In the two years since Martha (as she's known here) and her sister Lucy last saw each other, the prodigal appears to have lost her table manners. She shows up buck naked in all the wrong places, slips into bed with her sister and brother-in-law while they're having sex, picks ideological fights that drive a wedge between Lucy, whose solicitude for her younger sibling is edged with amorphous guilt, and her husband, Ted, a reluctant host at best.

What drove the sisters apart — and conceivably drove Martha to the cult — is only hinted at in scraps of resentful exchange. A touch improbably, Martha won't tell Lucy where she's been, but fragments of memory repeatedly carry her back to the dreary abandoned farmhouse where, under the tutelage of cult leader Patrick (John Hawkes), she was broken down into Marcy and/or May and/or Marlene.

By design, Martha Marcy May Marlene is less a film of ideas than an adroit use of film language and performance to track the breakdown of a sense of self that may have been wobbly to start with. Marcy's memories flow smoothly in and out of her increasingly fragile grasp of reality; they're not flashbacks so much as a cunningly edited merging of "here" and "there," a look into the fractured mind of a girl so untended and half-formed that she's painfully vulnerable to the mind games of a man whose only resource is his charisma.

Hawkes, who memorably played the sinister Uncle Teardrop in last year's Winter's Bone, puts a subtly layered spin on this quietly twisted autocrat. Patrick is a sensitive musician whose blend of fatherly protectiveness, sexual aggression and physical menace turn his captive community into compliant wrecks and possible killers. He's a firm believer in his own propaganda, and thus a walking lesson in how quickly genuine idealism can curdle in the company of a ravenous hunger for power. And Olsen, though she doesn't appear to be doing much at any given moment, proves spellbindingly mercurial as the novice who suppresses her naturally observant intelligence to fall under a spell that will grip her long after she seems to break free. Durkin may not have much that's new to say about cult leaders or their prey, but in his first feature he has groomed a new indie queen — unless Hollywood gobbles her up first. (Recommended)