Accessibility links
Tennessee Teachers Find It Hard To Make The Grade Tennessee overhauled its teacher evaluation system last year to win a grant from the federal Race to the Top program, and now teachers say they are struggling to shine. But the state says that there's no way educators are performing at the top of their game when students are not. 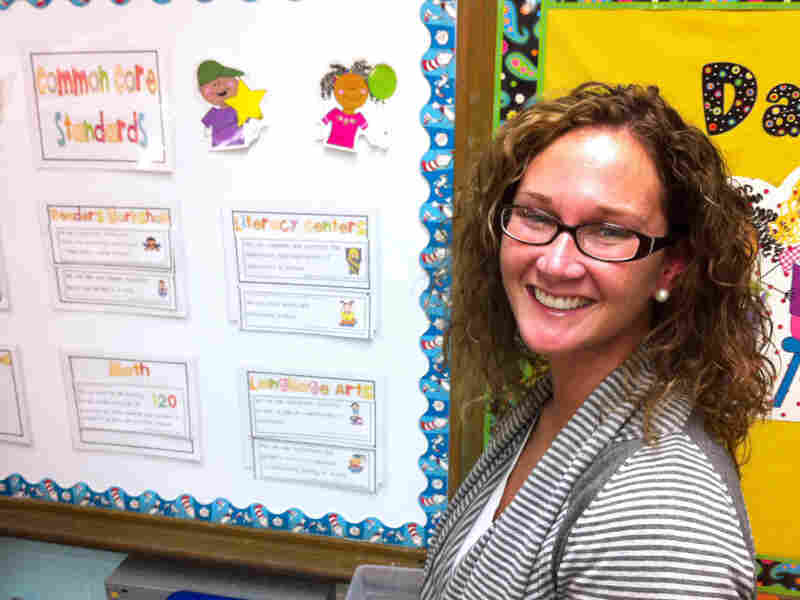 Janna Beth Hunt, a first-grade teacher at Nashville's Norman Binkley Elementary, is disappointed with how she scored on her first observation under the new system. 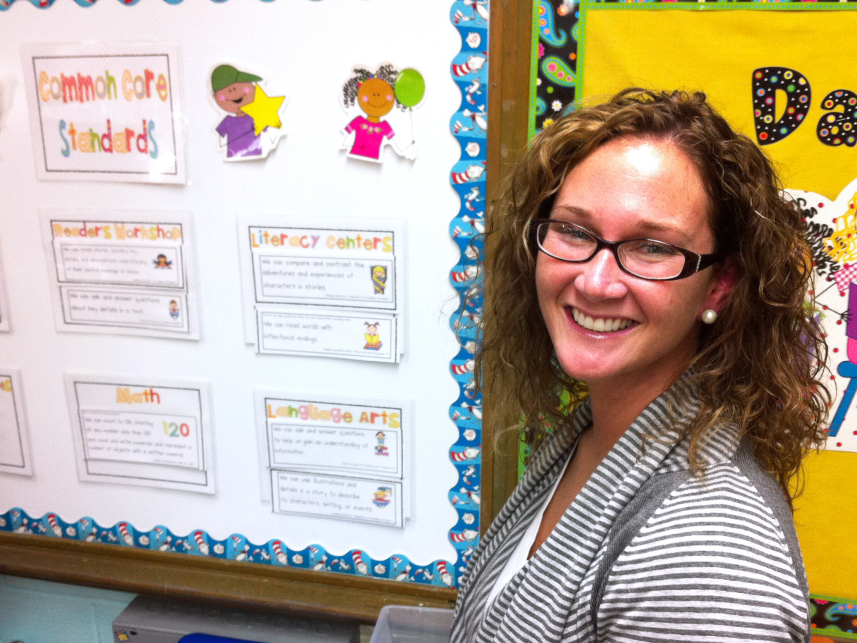 Janna Beth Hunt, a first-grade teacher at Nashville's Norman Binkley Elementary, is disappointed with how she scored on her first observation under the new system.

Tennessee overhauled its teacher evaluation system last year to win a grant from the federal Race to the Top program. Now many teachers say they are struggling to shine, and that's torpedoing morale.

For Janna Beth Hunt, who teaches first grade at Norman Binkley Elementary in Nashville, it's been a disappointing process. Tennessee's new observations grade teachers on a scale of 1 to 5. Many are scoring what feels like a C, which under the system isn't enough to get the job security of tenure.

"I definitely feel like I'm better than an average teacher. I'm not happy with a 3, but I told my principal that, and he knows that I'm a perfectionist and that I want a 5. It's just extremely difficult to get a 5," Hunt says.

Some teachers say it feels impossible. To score at the highest levels, students must demonstrate a mastery of the day's lesson. But the four-page checklist used to grade teachers is incredibly detailed, down to how handouts are passed around. That kind of nitpicking is new for every teacher in Tennessee, but especially for veteran educators, who may not have had anyone watching them in years.

"We evaluated tenured teachers twice every 10 years, and virtually every teacher was told that they were at the top end of the scale," says Kevin Huffman, the state's education commissioner.

That's not unusual. A study published last year by the New Teacher Project pointed out weaknesses in teacher evaluation systems across the country. Race to the Top money pushed through controversial changes in several states, often without the full support of teachers. But Huffman says there's no way educators are performing at the top of their game when students aren't.

"I don't understand how you can run an education system where we tell more than half of the children — these are children — in the state of Tennessee, 'Hey, you're not proficient,' but then we're uncomfortable saying to adults, 'Not all of you are great,' " Huffman says.

Teacher Dorcel Benson has 30 years of experience and still puts in long hours.

"I would love for [Huffman] to come and spend a day or two with me. Tell me specifically what I need to do to improve," Benson says.

While other teachers are spending late nights prepping for the new high-stakes observations, Benson has accepted her mediocre marks.

"Life is too short. And my health is much more valuable to me," she says.

Benson says she and most teachers do the best they can, even when they're handed a tough situation, like a student who reaches her fourth-grade class still unable to read. Education officials, she says, don't seem to appreciate the challenge.

'It's Why We Come To School'

Discouraging evaluation scores have shattered teacher morale, says Tim Tackett, a school board member. "Don't forget that these are just big kids. They like to be patted on the back, too," he says.

Tackett is from one of several districts whose school boards have fired off letters to the state asking for a complete review of the new evaluation system. They're also voicing concerns about the workload on administrators.

Principal Barbara Ide says she struggles to find time for answering emails and talking to parents between all the additional observations.

"Nothing was taken off the plate, and a lot was added to it. But the part that was added to it is really the essence of what an instructional leader does. It's why we come to school," Ide says.

Even while principals have some critiques, Ide isn't alone in recognizing the advantages of accountability. Being in classrooms, she says, has led to deeper discussions about teaching techniques.

Lakesha DeJarnett left her job in journalism three years ago to teach. She teaches 8th grade at Thurgood Marshall Middle School outside Nashville.

"There are some who feel like, 'I don't know what I got myself into,' especially some of us first-, second-, third-year teachers, and especially those of us who changed careers to come into this," DeJarnett says.

But she says the challenge is bringing out her best. She just wonders how long she and others can keep up the new pace.