Accessibility links
Occupy Wall Street Timeline: From A Blog Post To A Movement After more than a month, the cause that started with a protest in New York has gained momentum and spread around the world. That's quite a feat for what began in July as a blog post inspired by the Arab Spring.

Occupy Wall Street: From A Blog Post To A Movement

Occupy Wall Street: From A Blog Post To A Movement 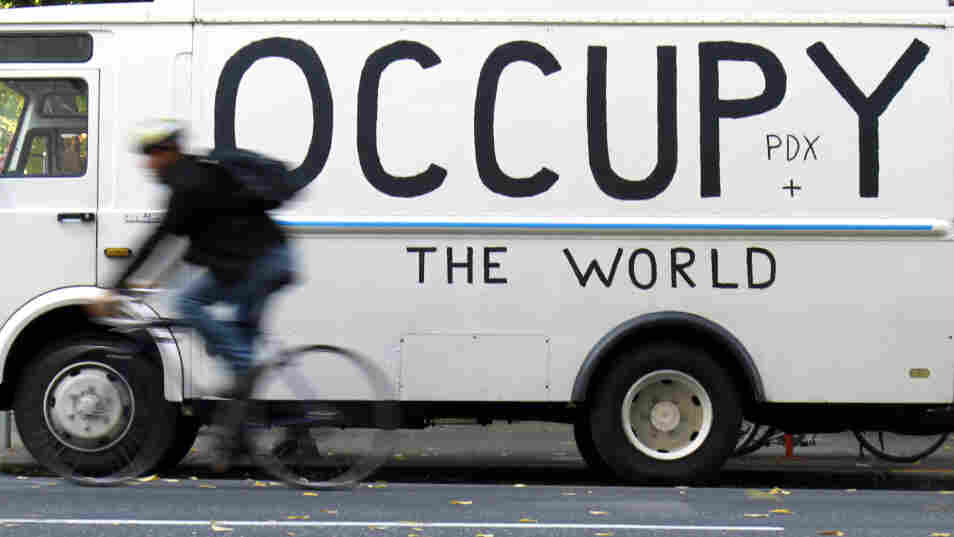 The Occupy Wall Street protests have inspired similar events around America, and in dozens of countries. Here, a truck has been painted with a sign supporting the Occupy Portland protests in Oregon. 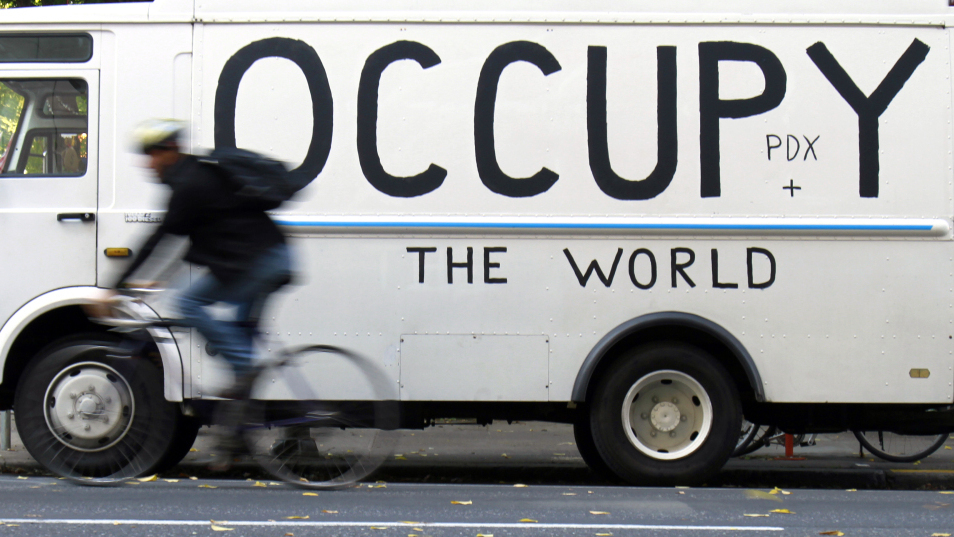 The Occupy Wall Street protests have inspired similar events around America, and in dozens of countries. Here, a truck has been painted with a sign supporting the Occupy Portland protests in Oregon.

After more than 30 days, the Occupy Wall Street movement has evolved from a protest in New York City into a growing international movement. And it all started in July, as a single blog post inspired by the Arab Spring.

Here's a look at significant developments in the Occupy Wall Street timeline, as the movement gathered momentum and spread to other U.S. cities.

July 13: Adbusters publishes a blog post calling for "a shift in revolutionary tactics" and urging tens of thousands of people to converge on lower Manhattan. The plan: "set up tents, kitchens, peaceful barricades and occupy Wall Street for a few months. Once there, we shall incessantly repeat one simple demand in a plurality of voices."

The protest will have no leadership, the post notes. And its sole demand will not be determined until the gathered mass of protesters agree on what it should be.

But the post's authors can't resist offering a candidate: "[We] demand that Barack Obama ordain a Presidential Commission tasked with ending the influence money has over our representatives in Washington. It's time for Democracy Not Corporatocracy, we're doomed without it."

For anyone wanting to catch up on media coverage of Occupy Wall Street, here are some links to get you started:

July 26: The Occupy Wall Street website is launched; the group also uses Twitter and Facebook to promote the Sept. 17 demonstration. Adbusters calls for similar protests to be held in central financial districts in Germany, Japan, Britain and around the world.

Sept. 17: The rally and march take place, and the protesters set up a temporary city in lower Manhattan's Zuccotti Park. Soon it will have its own newspaper, food supply chain and Wi-Fi. Reports of arrests and clashes with police emerge almost daily. Many of the incidents are filmed and posted on YouTube.

Sept. 24: New York police officers arrest more than 80 protesters as they march to Union Square. The conflict brings fresh charges that the police are overly zealous in using force and pepper spray.

Oct. 1: More than 700 demonstrators are arrested during a march across the Brooklyn Bridge. Police officials say they targeted only those protesters who clogged traffic lanes instead of taking the pedestrian walkway.

Oct. 5: Many of America's largest unions announce their support for Occupy Wall Street as the movement holds a large march in Manhattan. In a poll, the group's approval rating is measured at 33 percent — 19 points higher than that of Congress.

Oct. 6: Demonstrations spread to more cities, including Washington, D.C., where protesters pledge to remain in place for weeks to come.

Oct. 11: Reports spread about a group seeking to counter Occupy Wall Street by claiming to be "the 53 percent of Americans subsidizing these people so they can go hang out on Wall Street to complain." Inspired by conservative blogger Erick Erickson's blog post on Oct. 5, the group's slogan is a play on "the 99 percent."

Oct. 12: New York Mayor Michael Bloomberg visits the protesters' camp in Zuccotti Park, telling them they have two days to vacate the park so its owners, Brookfield Office Properties, can clean it. His office cites "unsanitary conditions." Protesters begin cleaning the park themselves.

Oct. 14: Brookfield Properties announces that it will not force Occupy Wall Street to leave Zuccotti Park. On his radio show, Bloomberg says the company bowed to pressure from elected officials.

Oct. 15: Loosely coordinated demonstrations inspired by Occupy Wall Street take place in 951 cities in some 82 countries, according to organizers.

Oct. 17: Adbusters proposes an Oct. 29 "#RobinHood Global March" — and a candidate for the group's unifying demand: "On October 29, on the eve of the G20 Leaders Summit in France, let's the people of the world rise up and demand that our G20 leaders immediately impose a 1 percent #ROBINHOOD tax on all financial transactions and currency trades."

Oct. 19: The New York City Police Department says one its officers — who famously pepper-sprayed women during a Sept. 24 protest — will be disciplined and is likely to lose vacation days.