Accessibility links
Amy Poehler: Playing Politics, But Only On Television Emmy-nominated actress Amy Poehler talks to Ari Shapiro about her role as an aspiring local politician on the NBC comedy Parks And Recreation. 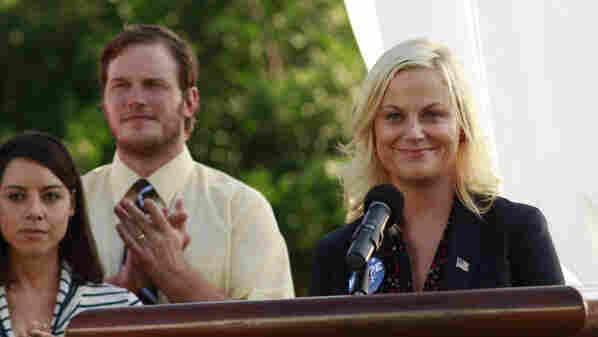 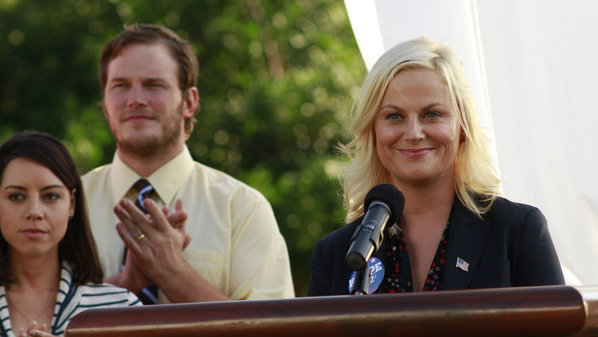 Amy Poehler joined Saturday Night Live in 2001 — a time, she says, when no one was really sure comedy was going to ever be okay again. She left in 2008 after playing Hillary Clinton during the show's coverage of an election cycle when, she tells Ari Shapiro on Thursday's Morning Edition, "the country was really paying attention to politics." 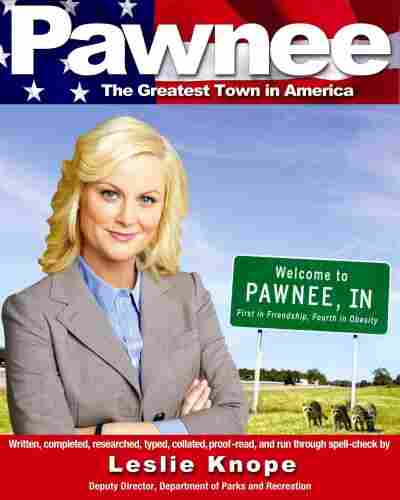 The Greatest Town in America

by Leslie Knope, Nate DiMeo and Creative Team of Parks and Recreation

She hasn't gotten away from the crossroads of comedy and politics — she now plays Leslie Knope, the Deputy Director of the Parks Department of Pawnee, Indiana on the NBC comedy Parks And Recreation. The fictional Knope is the officially credited author of the real new book Knope fans can buy, called Pawnee: The Greatest Town In America. The publication of Leslie's book was a recent storyline on the show.

As Poehler points out, what Leslie does may very well be more truly familiar to people than what Hillary Clinton does: "People's interaction with government is usually not on a macro level," she explains. Instead, they run into government at the DMV, or when they need local road improvements.

While politics maybe part and parcel of Parks, taking sides isn't. In fact, Poehler says that there are people who perceive the show as a "red-state" show, and those who perceive it as a "blue-state" show. And Parks manages that distance despite sometimes taking on fairly particularized political satire, as it did when Leslie's birth certificate became a hot topic during the early stages of her recently launched campaign for city council. Of course, running for office forces Leslie to think about the things she might not otherwise have to, Poehler says, like what kind of a candidate she wants to be and what she'll do to be elected.

Pawnee, long Leslie Knope's hometown, doesn't quite match Poehler's original upbringing: she was born outside Boston. But she does tell Shapiro that when she later moved to Chicago, she had an opportunity to experience a certain quality of the Midwest she struggles to explain, trailing off after describing a certain "broad-shouldered, windy, stern, Midwestern, warm-slash-passive-aggressive, wonderful" ... something or other.

And it's not as if she doesn't have her own comedic Midwestern experiences. In fact, when she worked in catering in Indiana, she catered a wedding for the bassist of the band The Smashing Pumpkins. "I served Billy Corgan shrimp off a tray," she says of the group's frontman. And naturally, she knew what an important moment this tray of shellfish would be. "I said to myself, 'Fifteen years later, I'm going to talk about this on NPR.'" Does Corgan even know about his brush with greatness? Sadly, he does not, she explains, then adds, "I'm hoping I can somehow get in contact with his management and get him to write a song about it."

The discussion ends with a "lightning round" in which Poehler answers questions about Halloween, her DVR, and what song is in her ear these days. But perhaps her best answer comes when Shapiro asks her who she'd like to play in a biopic. She first offers actress Kristy McNichol, then insists that answer isn't suitable for the NPR audience and replaces it with this one: "I would love to play Frank Gehry, the architect."