Accessibility links
School Debt A Long-Term Burden For Many Graduates As the nation's student-loan debt climbs toward $1 trillion, many students face 20-year repayment plans. The average debt is $24,000, but some owe far more and say this burden influences life decisions, from buying a house to whether to have children. 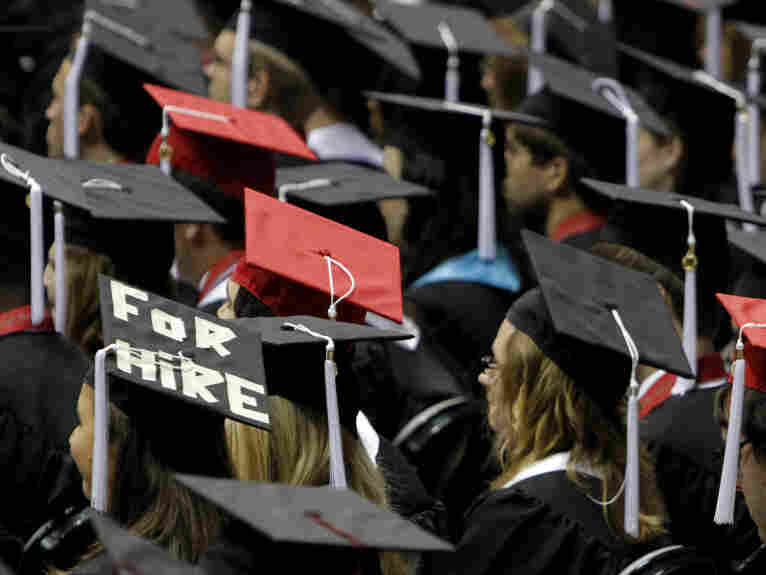 Students attend graduation ceremonies at the University of Alabama in Tuscaloosa, Ala. Two-thirds of college students now graduate with debt, owing an average amount of $24,000.

With the nation's student-loan debt climbing toward $1 trillion, it's taking many young people longer than ever to pay off their loans. Two-thirds of college students now graduate with debt, owing an average of $24,000. But some borrow far more and find this debt influencing major life decisions long after graduation.

"I was very naive, and I realize that now," says Stephanie Iachini, of Altoona, Pa. She was the first in her family to go to college and financed it herself. "Basically I was just signing papers because the education part meant a lot to me."

Between her undergraduate degree and law school — both at private institutions — Iachini owes about $160,000. She's now 31, and, only half-jokingly, says she's grateful her debt didn't scare away her husband when they were dating.

"He realized what he was taking on," she says, "but I don't think he realized the long-term impact, that this wasn't just something that we could pay off in three years and be done with it."

"About a third of bachelor degree recipients this year have enough debt to have a 20-year or longer repayment plan," says Mark Kantrowitz, publisher of fastweb.com and FinAid.org, leading Web sites about paying for college.

He says for students who need help, debt is almost unavoidable these days. Yet, "nobody is teaching these students how to manage their money. The schools aren't warning them, very strenuously, about borrowing excessively."

Iachini's debt is certainly extreme, and she had no idea what kind of monthly payment it would mean. Turns out it's $1,200. And, since Iachini chose nonprofit work over the law, that's more than half her take-home pay.

"Basically all of our financial decisions are made based on his salary alone," she says. That means decisions like buying a house and even having children. Starting a family doesn't seem possible for now — maybe ever, as Iachini and her husband have explained to relatives.

"It's not what they like to hear," she says. "We get the pep talk, 'Well you guys can make it work.' I know everyone says they don't know how they're going to afford children, but we really don't."

Iachini says it weighs on her conscience that she's not the only one constrained by her debt. Her voice catches with emotion as she describes the difficulty of having to watch her husband pay all the bills every month.

"He has dreams that he wants to fulfill," she says, "and he really has to put them on the back burner, because there's not much else I'm able to contribute."

Annie Spencer, who lives in New York City, was also the first in her family to go to college — a small state school, then private graduate school.

"I can't lie, I often fantasize about just fleeing the country and being a debt fugitive in Canada or Europe or somewhere," Spencer says.

From the minute I graduated from my master's degree, my job prospects were completely limited to the jobs that would help me pay back my loans.

She saw higher education as a way out of the precarious paycheck-to-paycheck existence she'd grown up in. So, despite merit scholarships and working 30 hours a week, Spencer racked up $85,000 in student-loan debt.

"From the minute I graduated from my master's degree," she says, "my job prospects were completely limited to the jobs that would help me pay back my loans."

She gave up on social justice work and landed a decent paying government job. But in New York City, with high rent, plus $600 a month in loan payments, it was tough.

"There were months when I was really having to watch my budget in terms of grocery shopping," she says. As with many repayment plans, hers is graduated, meaning payments increase as time goes on. She worried that at some point groceries would have to go on a credit card.

Spencer's boyfriend also has substantial student-loan debt, and she says this burden hangs over any future she tries to imagine for the two of them.

Unlike most other debt, even if you declare bankruptcy, says aid expert Kantrowitz, student-loan debt does not disappear.

"Education debt has often been highlighted as good debt, because it's an investment in your future," he says. "But too much of a good thing can be harmful."

Last year, Spencer's student-loan debt helped push her into an unlikely course — back to school for a Ph.D. No loans this time; she's on a teaching fellowship. But Spencer figures if she's always going to be strapped for money, she might as well feel good about her career. And, it lets her defer those loans.

"Honestly," she says, "it was just becoming such a day-to-day stress. So being back in school gave me a chance to stop the clock."

A chance, she says, to figure out a better strategy to pay down her crushing debt.