Accessibility links
Prominent Syrian Activist Flees, Reveals Identity News of the Syrian uprising has come largely from activists who have taken great risks to get the story out. One of them went by the alias Alexander Page. But he recently fled to Egypt and and is now speaking out under his real name, Rami Jarrah. 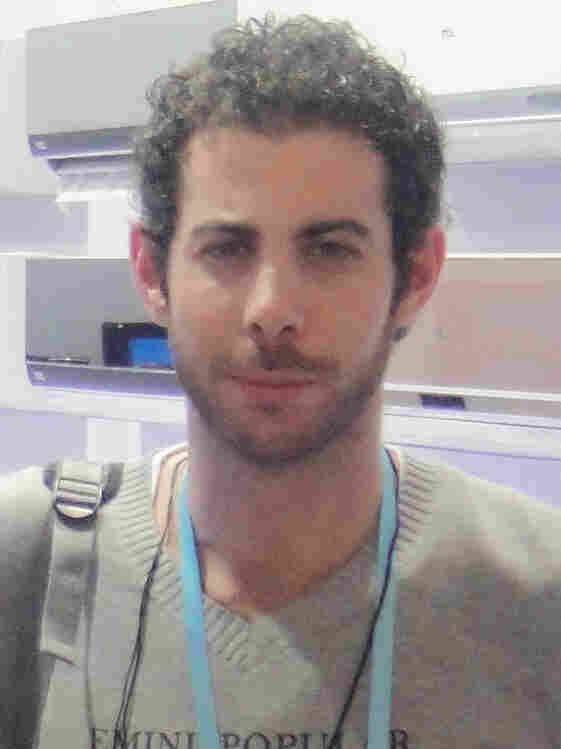 At his home in Syria, activist Rami Jarrah, 28, spoke out under the alias Alexander Page. Fearing arrest, he recently fled to Egypt.

The Syrian government has barred most international journalists from the country, restricting coverage since an uprising began last spring. In response, Syrian activists have played a crucial role in providing information to the wider world.

One of the most prominent is Alexander Page — an alias that a young Syrian used for his safety. He was often cited by international media outlets, including NPR.

But he recently fled Syria after his identity was compromised and he was in danger of arrest.

I had arranged to meet Page in Cairo, to see, firsthand, the price Syrian activists pay for simply talking to the media.

I knew his voice, but not his real name or his face. He had said that his last interview with NPR had played a role in unraveling his identity to Syria's secret police. He was commenting on pro-government hackers known as the Syrian electronic army.

Now I was waiting outside a landmark Cairo hotel, anxiously dialing my cellphone when a young man approached.

"I'm Rami Jarrah," he said, beaming. This intense young man was the activist behind the alias of Alexander Page, well known to the international media for his impeccable English and precise details of events inside Syria.

"They are looking for people who talk to the media; they found out that I was doing that and they considered me a spy," he said, as he began to explain the series of event that forced him out of Syria.

His comments about pro-government Internet hackers, broadcast by NPR on Sept. 25, were noted by Syrian state television, he explained. His remarks were reported in a TV news bulletin, but twisted to benefit the regime.

It's a drug, each time you want to do it again. It's just this drive to be able to say 'freedom.'

"They changed that whole thing. And they basically just said that Alexander Page admits to NPR that his page had been hacked by the Syrian government and they basically won the fight," he said.

But the story raised his profile. At first, he thought he was still safe. He had never revealed his real name to journalists, not even to activists in Syria. But he had a contact who discovered that the alias Alexander Page was no longer a safe cover.

"For some reason the Syrian intelligence found out who I was and we just checked coincidentally," he said. "And the person who checked didn't even know my real name. He said, 'Is your name Rami Jarrah?' And I said, 'Yes.' And he said, 'Leave the country now.' So within about three hours I was at the border."

Jarrah now works out of an office in Cairo, where he posts comments to Facebook and Twitter.

He took part in demonstrations at the Syrian Embassy in Cairo, where he organized a live stream of the event for the Internet. He participated in a sit-in at the Arab League when foreign ministers met to consider measures to stop the Syrian government crackdown. But his activism has had a price.

He packed what he could and left in a hurry with his wife and daughter for an uncertain future. When the protests began, Jarrah, 28, was a successful businessman with a comfortable life. He left his job rather than join a pro-government rally. He had already become part of a spontaneous protest movement in the early spring, inspired by the revolts in Tunisia and Egypt.

"I did witness a massacre in central Damascus," he said. "And I saw people being gunned down — and at that moment, it was unbelievable. I can't explain it. And to see that and to turn my back is impossible. I think you would be senseless to not want to work with these people."

He is now working in Cairo, sharing ideas and strategies with young revolutionaries from around the Arab world. But he says he feels guilty for leaving others to face the risks on the Syrian streets. The latest news, he says, is of a friend who was shot in Damascus while trying to escape arrest.

"I am depressed every day that people are dying," he said. But, he added, "I'm not depressed in general. Barriers have been broken. People around the world now know that Syrians are not stupid people who don't know that their government is controlling them. I am glad people know that now there is a difference between the government and the people."

Jarrah now gives interviews openly and he will continue to write on the Web under the name Alexander Page.