Accessibility links
Clinton Pushes Pakistan On Terrorism Secretary of State Hillary Clinton met Pakistan's Foreign Minister Hina Rabbani Khar in Islamabad on Friday for talks on counterterrorism. During the brief press conference, Clinton said that Pakistan should not allow extremists to operate on their soil, while Khar denied the charge repeatedly. 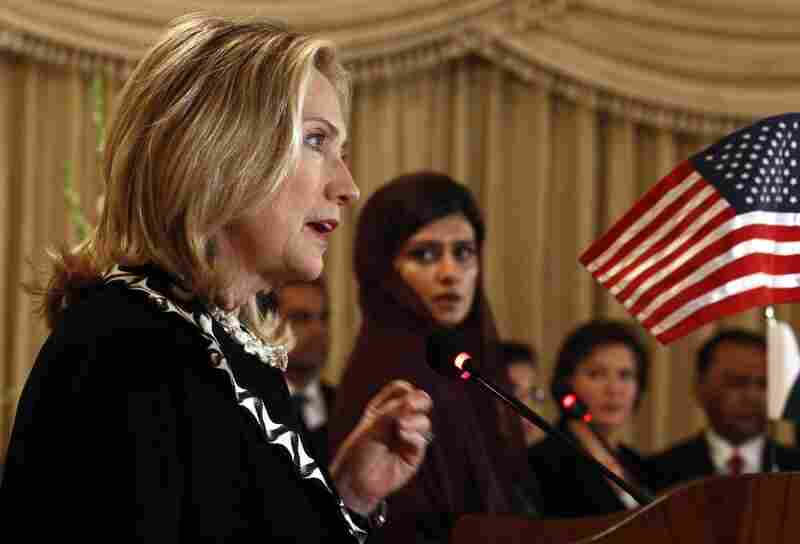 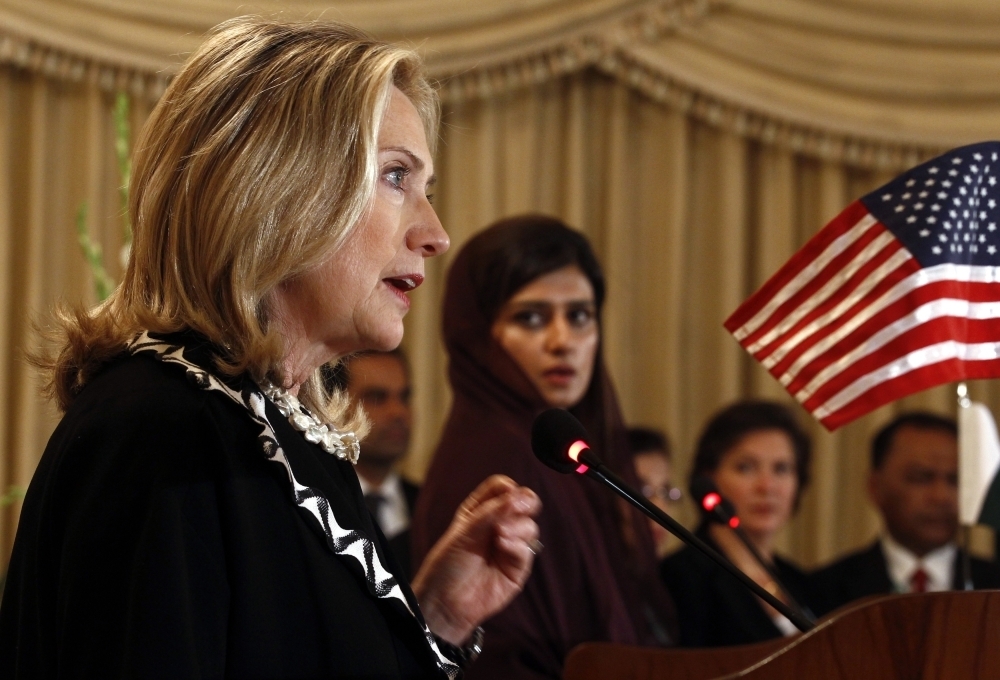 Secretary of State Hillary Clinton wrapped up talks Friday with senior Pakistani leaders as the two sides continued to show strains in their relationship over the issue of combating terrorism.

Clinton took part in high-level discussions Thursday night and met Friday with Pakistan's Foreign Minister Hina Rabbani Khar. It was brief, and at a press conference afterward, the two women were cordial, if stiff.

Clinton's visit was part of a high-profile delegation that included CIA chief David Petraeus and Chairman of the Joint Chiefs of Staff Gen. Martin Dempsey. Clinton said the discussions with the Pakistani leadership focused on Afghanistan and counterterrorism.

At the press conference, Clinton hinted that progress was limited.

"It is no secret that the United States and Pakistan do not always see eye to eye," she said. "And we will not resolve the differences in our views in any single visit."

A major point of U.S. concern is Pakistan's ties with the Taliban and the so-called Haqqani network, Afghan insurgents who have bases in Pakistani territory. During the day, Clinton confirmed rumors that the U.S. had a meeting with members of the Haqqani network. State Department officials, speaking on background, said there was just one meeting over the summer, and it was at the request of Pakistan's intelligence agency, the ISI.

Let me reconfirm that there is no question of any support by any Pakistan institutions to safe havens in Pakistan. Let me be unequivocal, completely clear on that.

Since then, there have been attacks in Afghanistan blamed on the Haqqanis, including the prolonged assault on the U.S. Embassy in Kabul last month. At Friday's press conference, Clinton once again addressed the issue of insurgents who are based on Pakistani soil.

"For too long, extremists have been able to operate here in Pakistan and from Pakistani soil," she said. "No one who targets innocent civilians — whether they be Pakistanis, Afghans, American or anyone else — should be tolerated or protected."

Clinton's comments about militant safe havens in Pakistan are similar to those made by other senior Obama administration officials over the past few weeks, and they have hit a nerve, putting the Pakistani military and civilian leadership on the defensive. Foreign Minister Khar denied the charge several times during the press conference.

"Let me reconfirm that there is no question of any support by any Pakistan institutions to safe havens in Pakistan. Let me be unequivocal, completely clear on that," she said.

Khar and Clinton seemed to talk past each other at the press conference. Both voiced an abhorrence of terrorism, and the hope for a stable Afghanistan. But they approached the problems from different perspectives. At one point, Khar seemed annoyed by journalists' questions that suggested Pakistan was not doing enough to combat militants.

As Clinton left Islamabad, U.S. officials said they were confident the Pakistanis heard their message about what they'd like to see happen. Whether or not the Pakistanis choose to act is another question.