Accessibility links
Occupy Wall Street, Tea Party: United In Distrust The movements may disagree on many issues, but they seem to have similar opinions on the bank bailout, the federal deficit and the influence of corporations and money on Congress. Harvard professor Lawrence Lessig says there's good reason both the left and the right agree that there is too much power in too few hands. 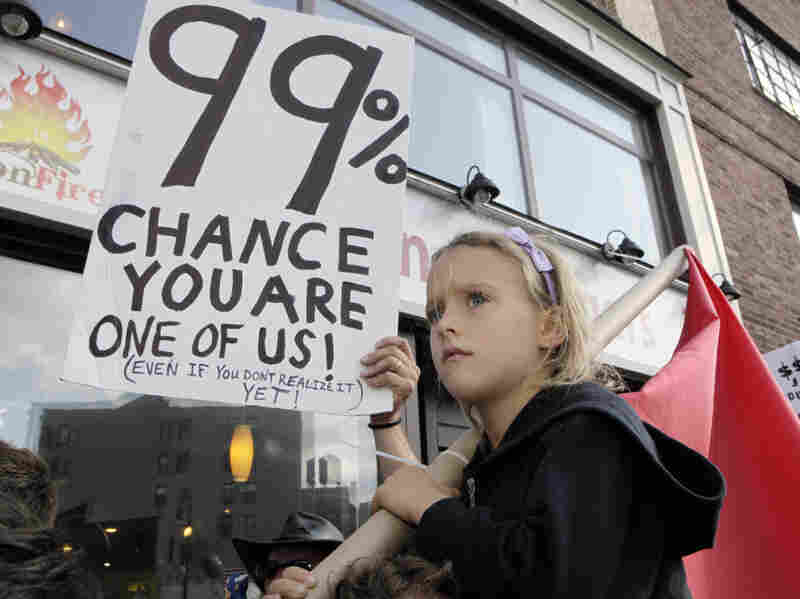 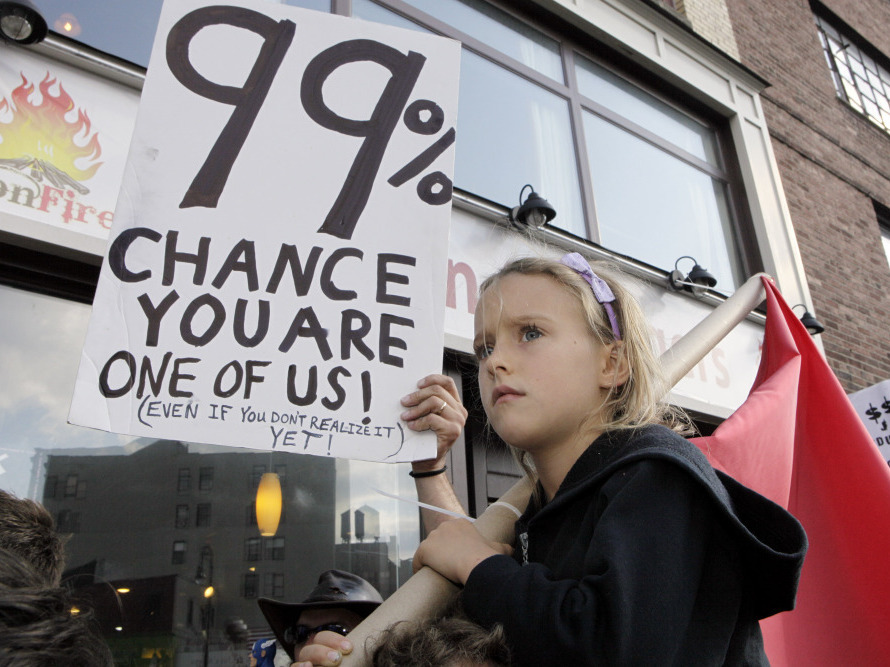 Members of Occupy Wall Street and the Tea Party may disagree on many issues, but there's one thing that unites both groups: distrust in concentrated power.

"One can't help but feel that there's a huge system out there between politicians, between corporate interests, that really prevents the average Joe from being able to air out his concerns," says Charles Zhu, an Occupy Wall Street supporter who was in Washington, D.C., this week to join protests in McPherson Square.

At both Occupy Wall Street and Tea Party protests, you might hear similar opinions on the 2008 bank bailout, the federal deficit and government spending, and the influence of corporations and money on Congress. Harvard professor Lawrence Lessig says there's good reason to this visceral sense by both the left and the right that there is too much power in too few hands — whether it's the government or corporations.

We have a government where members spend between 30 and 70 percent of their time raising money to get back to Congress.

"We have a government where members spend between 30 and 70 percent of their time raising money to get back to Congress, [and a Congress] that is increasingly dependent on the funders," Lessig told weekends on All Things Considered host Guy Raz. He says that the funders are in fact, not the people.

"Anyone who knows anything about campaigns knows it's the people who contribute the maximum in a campaign that have the real power in Washington," says Lessig, whose new book, Republic, Lost: How Money Corrupts Congress — and a Plan to Stop It, is about the concentration of money and power in politics.

Those who can contribute the maximum amount to campaigns represent about .05 percent of the population, Lessig says. So he says forget "We are the 99 percent," the Occupy Wall Street movement represents something more.

"[They] stand for the 99.95 percent of America who are not deep into the campaign giving [and] that can't direct policy in the way that we see policy being directed," he says.

Change We Can Agree On

Toby Marie Walker, head of the Tea Party in Waco, Texas, says there is too much money in politics and worries about its influence on regulation and laws.

"I'd like to see some finance laws that say only so much money can come from outside your district [or state] so that the local people have more control over who gets elected." Walker says. 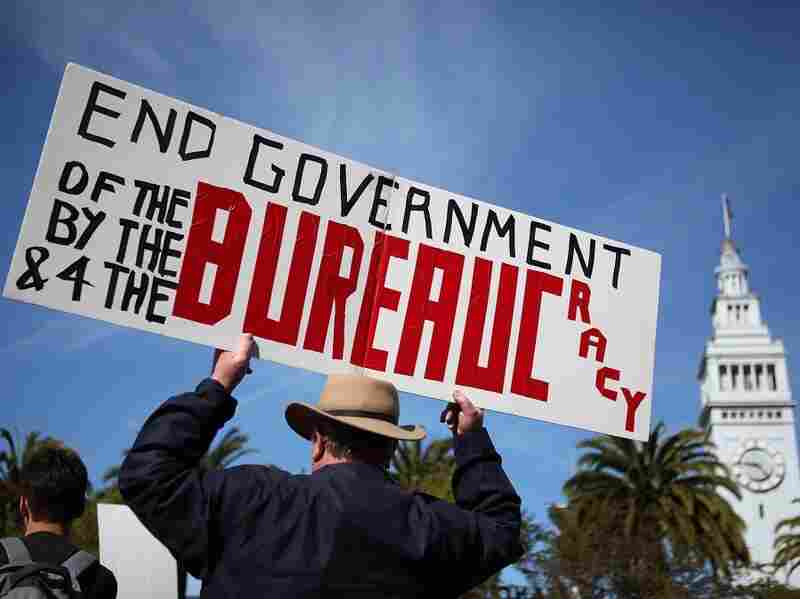 An activist holds a sign during a tax day Tea Party rally in San Francisco. 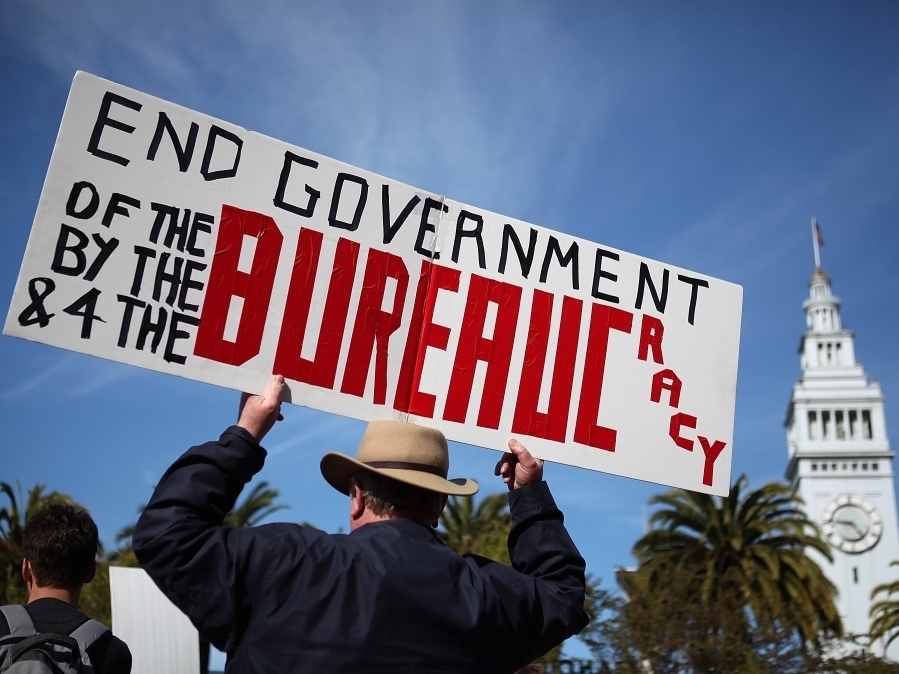 An activist holds a sign during a tax day Tea Party rally in San Francisco.

That sentiment has been echoed in the Occupy Wall Street movement, but Walker says the groups don't exactly see eye to eye — yet.

"Their solutions are nothing like our solutions," she says. "There are natural things that we'll agree about, but it's the process of how do we get there that I think would be harder to bring people together on."

Lessig says campaign finance reform should be one issue the Tea Party and Occupy Wall Street movements can find common ground and agree on. He says changes in campaign finance laws are critical in the effort to take the influence of money out of politics.

"So if we could have a system for funding elections that guaranteed that it wasn't just the tiny slice, but instead all of us that was in an important way providing the money," he says, "then I think we could at least imagine a Congress that could be independent enough to stand up to very powerful financial interests."

People recognized the massive economic collapse was caused in part by financial deregulation on Wall Street. But Lessig was astonished that Wall Street was still able to "blackmail Congress" into enacting a reform bill that didn't change the fundamental problem with the architecture of the financial system.

"Never in the history of our republic — after we've had some kind of financial collapse — has the financial industry so successfully blocked the ability to re-regulate to deal with whatever caused the collapse," he says.

In his new book, Lessig maps out a potential plan to make people the funders of Congress — and not corporations or Wall Street. He says funding campaigns through small-dollar contributions only is the best place to start.

Similar plans have been tried in several diverse states like Arizona, Connecticut and Maine. Whether it is his plan or a similar small-dollar funded plan, Lessig says, it would bring about the critical change needed.