Accessibility links
The Osprey: Good Reviews, But A Costly Program The Osprey was extremely expensive to develop and had multiple crashes during testing. The Marines flying it today in Afghanistan now sing its praises, but its high cost is now an issue as the Pentagon looks for cuts. 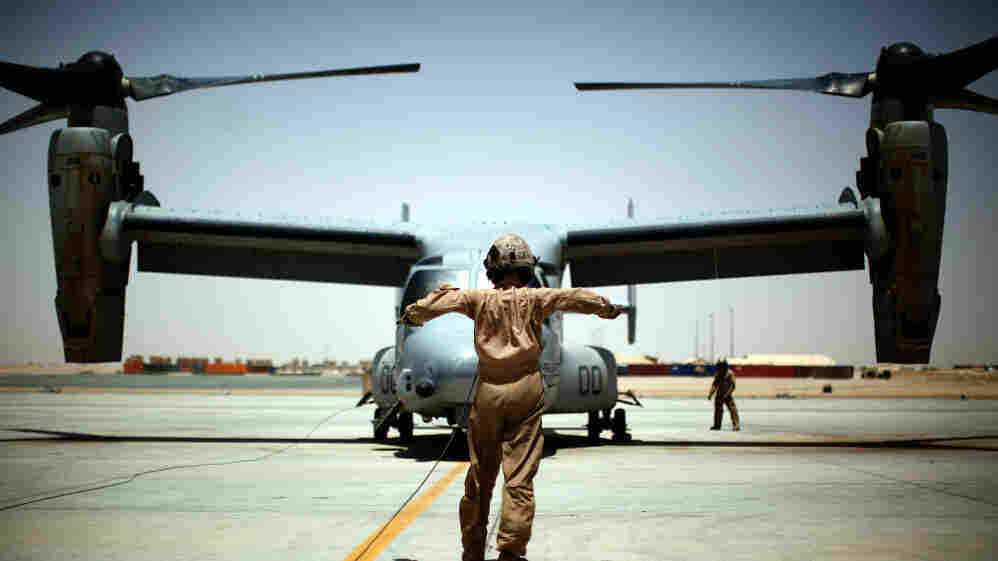 A U.S. Marine Osprey at Camp Leatherneck in southern Afghanistan. The aircraft suffered multiple problems when it was being developed, but is now getting praise from those flying it. 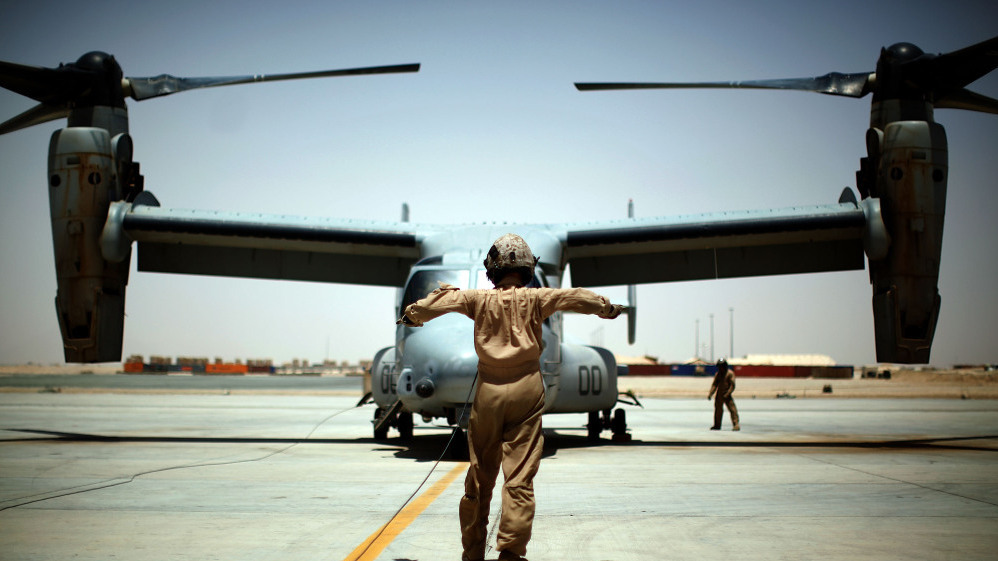 A U.S. Marine Osprey at Camp Leatherneck in southern Afghanistan. The aircraft suffered multiple problems when it was being developed, but is now getting praise from those flying it.

Over three decades, the U.S. has spent billions of dollars and lost 30 lives creating a unique aircraft, the Osprey, which lifts off like a helicopter and flies like a plane.

After all these problems, the Marines are now using them widely in Afghanistan, and the Osprey is getting excellent reviews.

But the aircraft now faces another question: Because it's so expensive, should the Osprey program be slashed as the Pentagon looks for cuts?

I recently had the chance to fly on one in Afghanistan that was leaving from Camp Leatherneck, the Marine base in the southern part of the country.

The Osprey is definitely an odd bird. On the runway it looks like a stumpy prop plane, except the twin engines seem to be pointed the wrong way — straight up at the sky.

The pilots were getting ready for what they call a "milk run," a series of hops moving men, ammunition and supplies between bases. The two big props wind up and we take off — straight up like a helicopter — but not for long.

Richard Whittle, author of a book on the Osprey

After the engines and propellers tilt forward, the Osprey flies like a plane, and faster than any helicopter, including the one it replaces, the ubiquitous Vietnam-era CH-46. A ride in one of those meant hydraulic fluid was likely to leak all over your bags and clothes. The pilot, Capt. Wilson McGraw, said you worried when a CH-46 wasn't leaking — that meant you'd run out of fluid. Not so in the Osprey.

"In this, we can look at a page that tells us when it's starting to deteriorate, and we can make a decision before it's an emergency," he said.

It also feels different than a helicopter. The milk run's many launches, banking turns and fast descents were enough to make one reporter — me — lose his lunch.

Widespread Use In Afghanistan

In recent years, more Marine squadrons have been moving to the Osprey, also known as the V-22. Reserve units will follow if a new $8 billion contract for 122 more aircraft goes through.

The Osprey's Checkered Past

1992 — Three Marines and four civilians are killed when an Osprey crashes while landing at Quantico Marine Corps Air Station in Virginia.

2000 — In April, an Osprey crashes in Arizona, killing 19 Marines. In December, another crash in North Carolina kills four Marines. All Ospreys are grounded.

2001 — Two officers are found guilty in a records falsification scheme that was meant to make the aircraft seem more reliable than it really was.

2002 — The Osprey takes flight again. Over the next few years, the Osprey is redesigned and retested. The redesign fixes frequent leaks and the flaws in flight control software.

2010 — On a night raid in Afghanistan in April, an Air Force V-22 carrying Army Rangers hits the ground short of the landing zone, flips over and kills 4 of 22 people on board.

Some people thought the Osprey would never make it this far. To get here, it has had to go through many changes.

"The Osprey that is flying today is not the Osprey that was flying in the 1990s, which was a dangerous aircraft," says Richard Whittle, a journalist who has long covered military affairs and wrote a book about the program, called The Dream Machine: The Untold History of the Notorious V-22 Osprey.

"In a nutshell, the story of the Osprey is it cost more in time, money and lives than anything else the Marine Corps ever bought," he says. "It took 25 years to get it into service, it cost $22 billion, and 30 people [were] killed in crashes during its development."

Three major accidents gave the Osprey its bad reputation and earned it the nickname "The Widowmaker."

After that crash, designers installed a system to warn if the aircraft was descending too fast. They re-engineered hydraulic lines. They tested and retested.

There were other problems. In 2001, two officers were found guilty in a records falsification scheme that was meant to make the aircraft seem more reliable than it really was.

In 2007, the first V-22s deployed to Iraq. Whittle says they finally got it right.

Basically, if you stop (buying) it now, you can save at least $10 billion, and given the budget pressures that the Pentagon is under, I think this would make a great deal of sense.

Larry Korb of the Center for American Progress

Detractors of the program say the safety statistics behind that claim are unreliable, and that the planes are still unstable.

Nevertheless, the pilots we spoke with in Afghanistan say when other pilots see them, they get jealous.

"It's a video game, I mean, it's a Ferrari. We joke about it, it's like getting into a sports car. I can't imagine going back to a helicopter," says Lt. Col. Brian McAvoy, who commands the unit I flew with.

McAvoy says today's Ospreys are safer than they used to be and safer than helicopters, because they fly higher and faster. Enemies don't notice them until they're out of range.

"Have we been shot at? I can definitely say yes, we've been shot at, and it kind of puckers you up every once in a while when you think, oh that guy's shooting at me, thank goodness he can't hear me," McAvoy says.

Like a sports car, though, they cost a lot to keep up. McAvoy says Ospreys require significantly more maintenance time between flights than the old CH-46. And Aviation Week magazine notes the engines need to be removed and sent back to the U.S. for complete overhaul much more often than helicopter engines.

So should the U.S. buy more of them?

"No. I think we ought to stop it right now, says Larry Korb, a former assistant secretary of defense, and a senior fellow at the Center for American Progress. "Basically, if you stop it now, you can save at least $10 billion. And given the budget pressures that the Pentagon is under, I think that this would make a great deal of sense now."

The Pentagon is looking to cut at least $450 billion over the next decade. Korb and others think this is a good place to start.

Nobody expects the program to be cut altogether. Recently, though, the Marine Corps' top aviation officer said there are proposals to cut the number of Ospreys bought in the next few years.