Accessibility links
The Nation: Obama Puts Lipstick On Iraq War Pig President Obama's announcement could be seen as a major victory for those who have rallied against the Iraqi war from the start. But for The Nation's Robert Dreyfuss, we're leaving Iraq nine years too late. 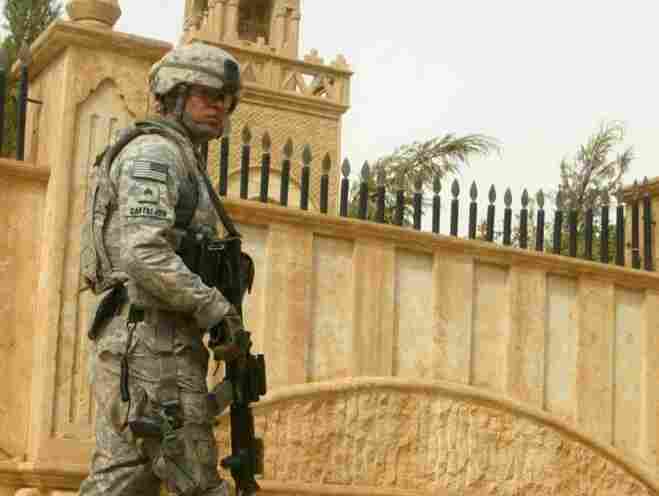 A US soldier guards a church in the northern Iraqi city of Kirkuk on July 18, 2011. 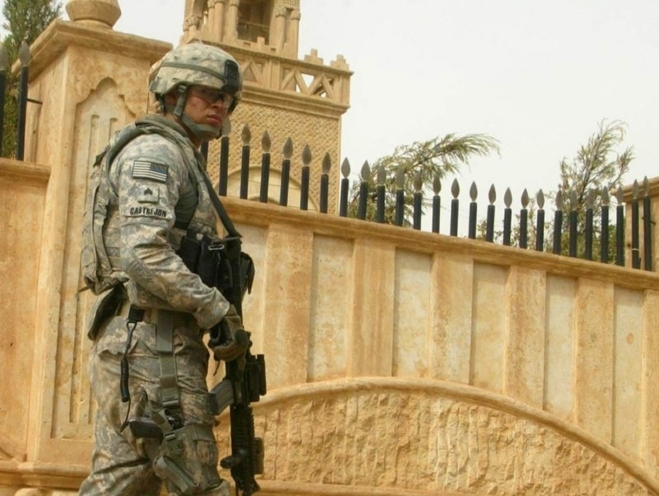 A US soldier guards a church in the northern Iraqi city of Kirkuk on July 18, 2011.

Read Another Opinion About Withdrawing From Iraq

Robert Dreyfuss, a Nation contributing editor, is an investigative journalist specializing in politics and national security.

Putting gobs of lipstick on the Iraq War pig, President Obama announced today that all US forces, except for a tiny number to protect the not-so-tiny US embassy in Iraq, were coming home. Said Obama:

"I can report that, as promised, the rest of our troops in Iraq will come home by the end of the year After nearly nine years, America's war in Iraq will be over.... Over the next two months our troops in Iraq, tens of thousands of them, will pack up their gear and board convoys for the journey home. The last American soldiers will cross the border out of Iraq with their heads held high, proud of their success and knowing that the American people stand united in our support for our troops."

1. To call it a success, after hundreds of thousands of people died, a trillion dollars in US cash spent, and the creation of a pro-Iranian Shiite government in Baghdad that supports Iran's nuclear program and backs President Assad in Syria, raises questions about what "success" means.

2. It wasn't President Obama's decision to pull out the last troops, since he's following an agreement signed in 2008 by George W. Bush. Bush signed it because he couldn't get a better deal from Prime Minister Maliki and his pro-Iran allies. And Obama tried, and failed, to get an extension of the deadline to allow thousands, perhaps many thousands, of US troops to remain. No dice.

3. Despite the fact that it was President Bush who agreed to the 2011 drawdown, the Republican know-nothings running for president are certain to attack Obama for leaving Iraq to its own devices.

4. The future of Iraq looks bleak, since the cold war along the Arab-Kurdish border, extending from far northwest Iraq to Diyala province at the Iranian border in central Iraq, is likely to heat up, quickly.

In his heart of hearts, Obama may believe that the war in Iraq was a "stupid war," as he called it before he ran for president. And he's probably glad to be rid of it, so he can run for re-election in 2012 saying that he ended the war in Iraq completely and that he's winding down the Afghanistan war by 2014. Maybe he'll tell us in his memoirs what he really thinks. Until then, we'll have to be satisfied with Obama's patriotic rhetoric about our troops coming out of the war in Iraq "with their heads held high."