Accessibility links
Shadow Financing Boom Exacts High Toll In China In Wenzhou, China's entrepreneurial capital, scores of business owners have fled, with at least one committing suicide, after they could not repay loans from the city's underground banks and loan sharks. The rise of this $19 billion empire highlights flaws in China's banking system. 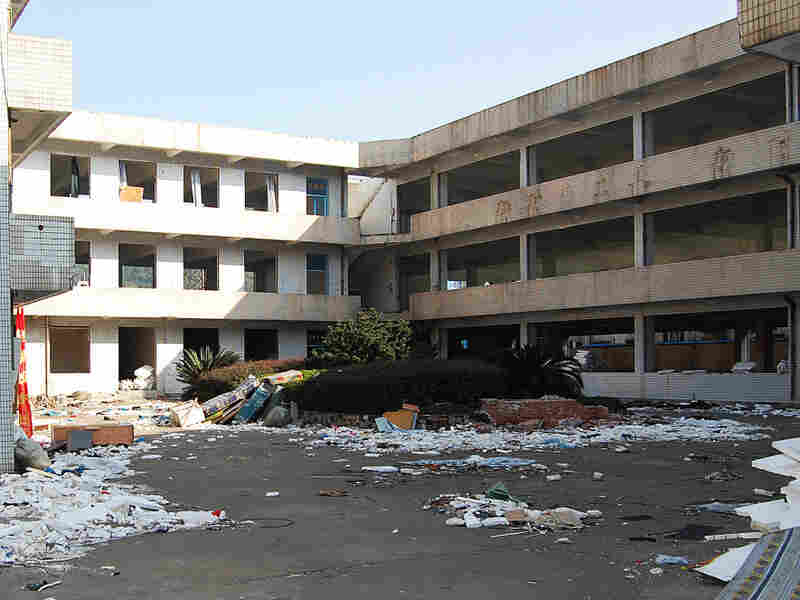 At least 80 business owners have abandoned factories like this one in Wenzhou, China's entrepreneurial capital, because they have run up exorbitant debts to the city's loan sharks and underground lenders.

In recent weeks, at least 80 business owners have fled Wenzhou in eastern China and gone into hiding because they can't pay crushing debts to the city's empire of underground lending firms and loan sharks.

Chinese Premier Wen Jiabao became so concerned that he flew to Wenzhou earlier in October to try to keep the problem from spreading.

The city's credit crisis highlights some of the flaws — and potential risks — of the banking system in the world's second-largest economy.

On a recent day, the doors at what used to be the Zhengdeli shoe factory in Wenzhou are chained shut. The only person there is a security guard from the government, which has taken over the facility.

In late September, the factory's owner, Shen Kuizheng, plunged to his death after jumping from his 22-story apartment. He was facing more than $60 million in debt.

"[Shen] expanded his business and wanted to be No. 1 in the shoemaking industry. He took out underground loans. And the interest was more than $15,000 a day," Xu says.

He owed money to many people; the number was probably in the thousands. He used the properties of more than 20 relatives as collateral to get loans. Wherever he went, the creditors would follow him. He was cornered. There was so much pressure, he lost all hope of living.

The Chinese government is deeply worried about inflation, which is more than 6 percent. So, earlier this year, it tightened already paltry lending by state banks to private firms. More factories turned to underground banks — which, in turn, jacked up their annual interest rates to 25 percent or more.

"He owed money to many people; the number was probably in the thousands," Xu recalls. "He used the properties of more than 20 relatives as collateral to get loans. Wherever he went, the creditors would follow him. He was cornered. There was so much pressure, he lost all hope of living."

Wenzhou is the capital of Chinese entrepreneurialism. Underground lending — valued at a staggering $19 billion, according to the state media — has been a part of commercial life in the coastal city for decades.

But Xu says he has never seen so many factory bosses run away. He says China's premier had no choice but to come to the city.

"Wen Jiaobao saw Wenzhou's economy was in the process of collapsing," he says.

The premier called for state banks to lend more to small firms and accept higher debt levels. He also called for a crackdown on high-interest loans.

China's state media says the problem has been contained, but some worry that credit crises could emerge elsewhere.

Ye Tan, an economist based in Shanghai, notes that underground banking isn't unique to Wenzhou.

"It exists in many other parts of China, including Inner Mongolia and Guangdong province. This is definitely not just a Wenzhou phenomenon," she says.

[Private firms] know underground lending is very risky because of the high interest rates, but they have no choice.

The monopoly on China's banking system should be broken, says Gary Liu, who runs the financial research center at the China-Europe International Business School campus in Shanghai.

He says the problem is that China's banks are state-run and prefer to lend to state companies.

Consequently, many private firms — which produce most of the jobs in China — must hunt for loans elsewhere.

"They know underground lending is very risky because of the high interest rates, but they have no choice," he says.

"For instance, you are bank staff, you have a friend. The friend can use his house to borrow a bank loan. And then you can lend money to underground borrowers," he explains.

And then they can lend the money to someone else. So, it can be hard for banks to keep track of where the money actually goes.

The rest of funding for underground lending comes from ordinary families, which can put entire communities at risk.

Underground Lending Out Of Control

Liu says despite these problems, the Chinese government has refused to reform the system.

"Many top leaders don't really understand the market economy. And actually, they don't want to give up their power. When there is a problem, the first thing that comes into their mind is to control," he says.

In China, shadow financing has grown dramatically in recent years. This summer, it stood at $2.6 trillion — nearly one-third of all lending in China, according to GaveKal, a global financial research firm based in Hong Kong.

Underground lending solves a huge problem for private companies. But no one knows exactly where all that credit is really going — and nobody seems able to control it.