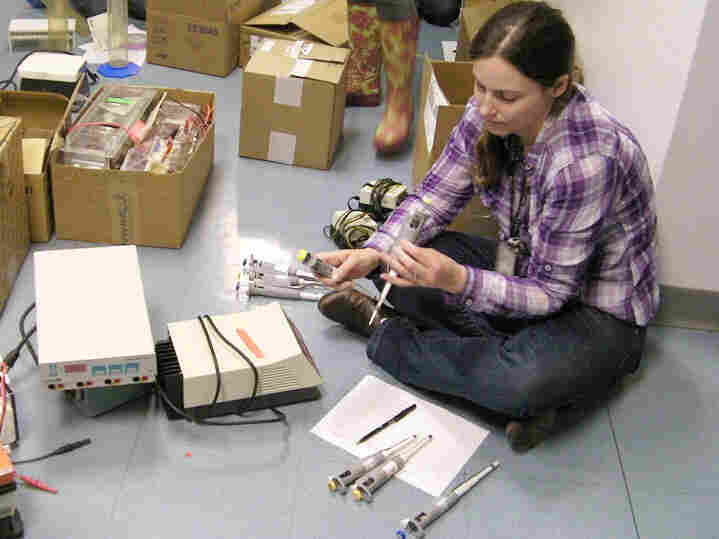 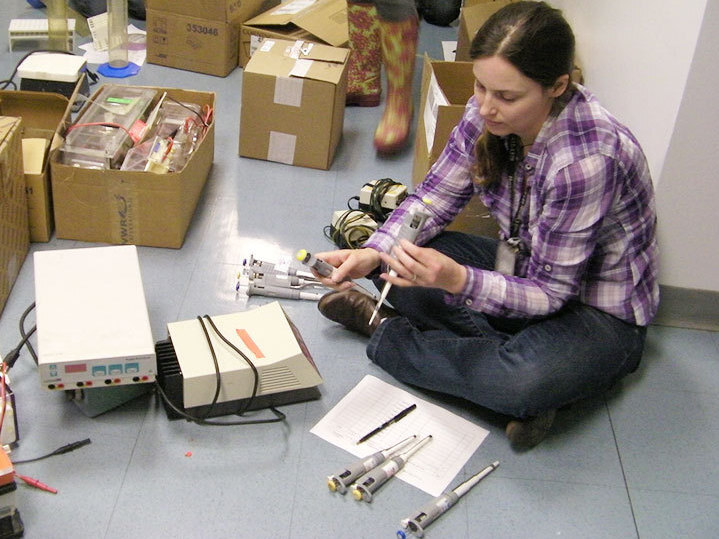 Science is an expensive endeavor. Labs in the U.S. can easily spend millions of dollars each year on equipment, chemicals and supplies alone. But for scientists in the developing world, these costs are often prohibitive. That's where a clever idea has made all the difference.

In a Harvard Medical School corridor on a rainy Saturday afternoon, a handful of graduate students are emptying boxes of scientific equipment into the hallway to take inventory: microcentrifuge tubes, radiation counters, micropipetters, Erlenmeyer flasks.

The boxes, which are stacked up to the ceiling, are full of equipment the Harvard labs no longer need. In many academic and industrial labs around the country, it gets thrown out or used for scrap. But here, it has a different fate.

Amanda Nottke, who has just defended her Ph.D., puts down a handful of pipettes and explains.

"We help consolidate surplus into shipments to go to labs in developing countries," she says. "Our upcoming shipment is going to be going to University of Nairobi in Kenya."

Labs all over the developing world can really use this stuff. Science overseas often stalls because of a lack of basic equipment, and many times, teaching labs just don't have enough materials to go around.

There are talented people everywhere in the world, but they don't have equal access to the resources to do great science.

That's where a nonprofit called Seeding Labs comes in. They shuttle surplus lab supplies from the U.S. to the people who need them in the developing world, with the help of student groups like this one.

Seeding Labs was founded by Nina Dudnik, who has a Ph.D. from Harvard in molecular biology. "There are talented people everywhere in the world, but they don't have equal access to the resources to do great science," she says.

Dudnik ran into this problem firsthand after she graduated from college. She went to a lab in the Ivory Coast in western Africa, where she worked on breeding better varieties of rice. The lab was short on supplies, and her labmate had to spend a lot of time working around the problem.

"A large part of her job was washing and drying disposable plastic test tubes. The goal was to reuse them for three months at a time," she says. "This is such a commonplace item [in the U.S.] that if you drop one on the floor, you throw it away. We would never have ever thrown them away in the Ivory Coast."

Dudnik spent a year living and working in Africa, and every day she experienced the passion and generosity of those around her.

"I loved it there," she says. "I had phenomenal friends and neighbors. I was adopted by a village."

So when it was time for her to leave to start her graduate work, she knew she couldn't just walk away. She had to do something.

"I was coming back to the United States, but at such a remove from the problems on the ground. It gave me something incredibly painful and powerful to think about," she says.

Back at Harvard, she soon found a group of students who felt very much the same. And then one of them spotted science equipment piling up outside the department's repair shop. Labs were simply not coming back to reclaim their old stuff.

"[We] really put two and two together, and knew that this equipment could have another home someplace else," Dudnik says.

This idea became the heart of Seeding Labs, which Dudnik created in 2008 after she finished her Ph.D. Today, she's CEO of the group, and she works with two others.

A world map is tacked up to one of the cubicle walls, freckled with pushpins. "These are all of the countries that we've sent lab equipment to. So 16 countries so far, about 23 different institutions," she says. 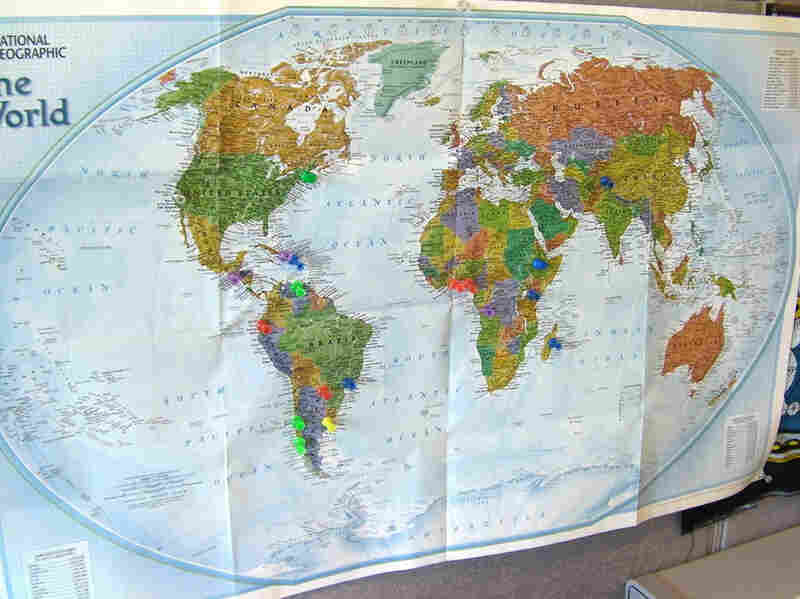 Pins on a map in the Seeding Labs office mark where shipments of lab equipment have been sent. The organization has shipped used supplies to 16 countries so far. 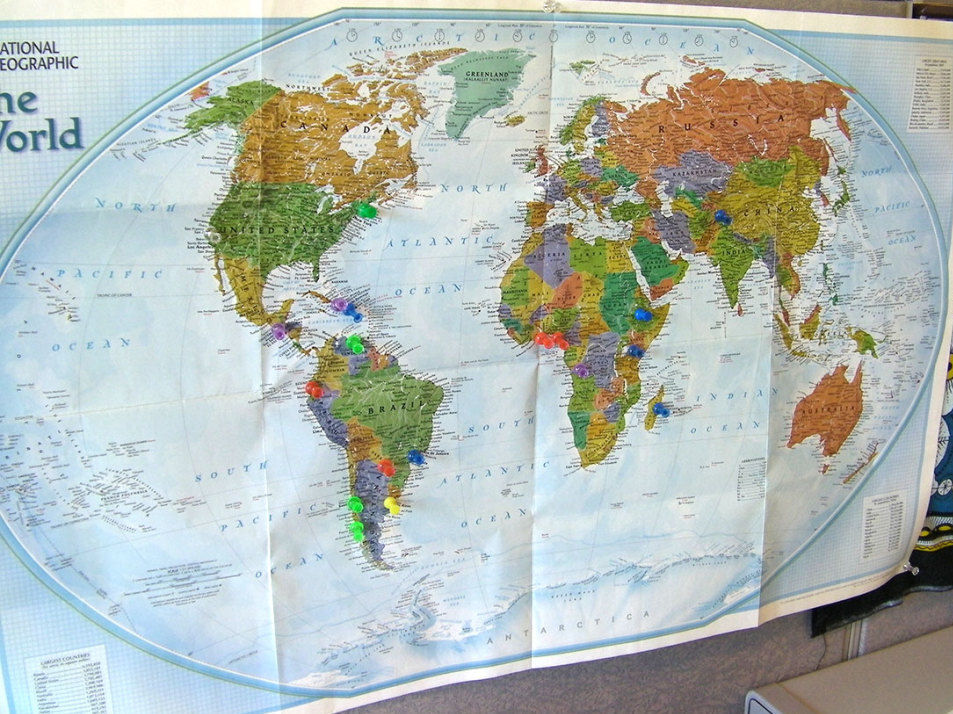 Pins on a map in the Seeding Labs office mark where shipments of lab equipment have been sent. The organization has shipped used supplies to 16 countries so far.

Seeding Labs ships a 20-foot container full of equipment to the developing world — mostly in Africa — four times a year. One is headed to Kenya this month. They're equipping entire departments of research labs, and they're benefiting thousands of students overseas by stocking teaching labs, too.

Someone who has seen how students can benefit is Ibok Oduro, a science professor at the Kwame Nkrumah University of Science and Technology in Ghana.

Oduro spent the summer in Boston as part of a new program set up by Seeding Labs. More than just sending equipment out to the developing world, Dudnik has started bringing scientists over to the U.S.

Oduro and eight other Seeding Labs fellows spent their summer at state-of-the-art facilities across Boston, like the one at the Novartis pharmaceutical labs in Cambridge. 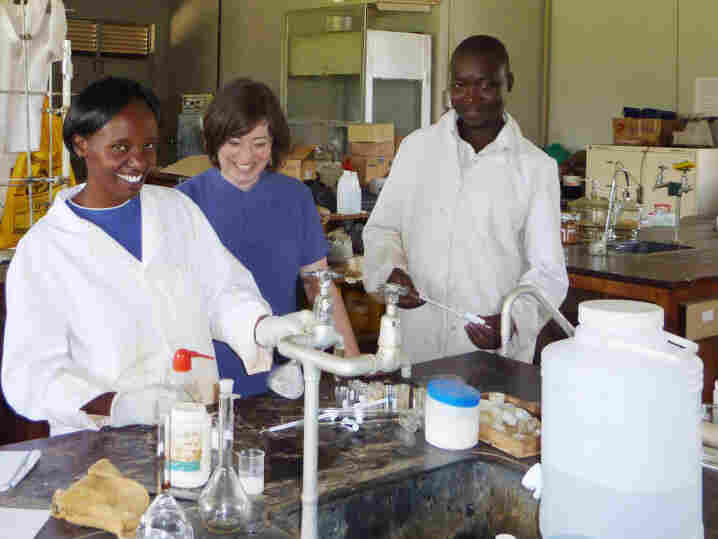 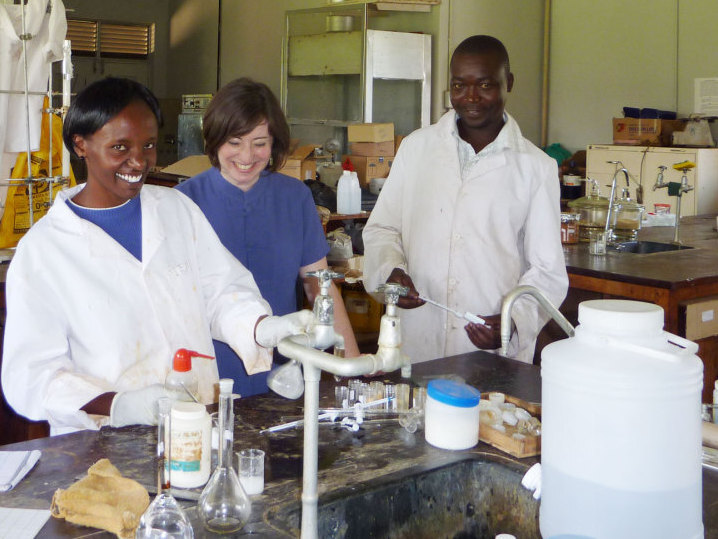 Dudnik believes that even though the equipment is absolutely essential, collaboration and sharing ideas is what science is really about. "How you ask the question is so much more important than how fancy the tool is that you have to answer it," she says.

Ellis Owusu-Dabo, who runs a tuberculosis lab in Ghana at the Kumasi Centre for Collaborative Research, says that when he gets back to Ghana next week, his goal is to "continue, continue, continue and not wane until we see what we want to see, which is good science with good outcomes that we can all be proud of."

That is exactly what Seeding Labs is aiming to do — whether it's helping science tackle problems like disease and hunger, or helping researchers in the developing world become part of the global scientific community.

Ari Daniel Shapiro is an independent radio and multimedia producer.