Accessibility links
Tom Waits: A Desperate Voice For Desperate Times Bad As Me, the latest album from the gravelly voiced crooner, is packed with hard-luck tales that fit this moment in history like a glove. 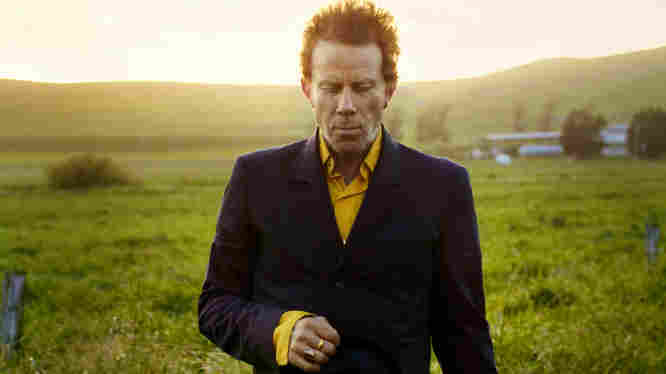 Tom Waits has just released his latest album, Bad As Me.

Tom Waits generally sings like a psychotic carnival barker or a drunken lounge crooner. And I really mean that as a compliment.

It's not everyone's cup of tea, that voice. Pushed to extremes like the characters in his songs, his voice is an exaggeration full of truth. He's a singer of blues sentiment like Screamin' Jay Hawkins or Howlin' Wolf or Radiohead's Thom Yorke. His latest album is called Bad As Me, and the songs on it sound truer than ever — partly because Waits' songwriting and arranging are still extremely potent, and partly because his thematic desperation fits this particular moment in history like a ragged glove.

There's a line in one song about bailing out millionaires, and plenty of lyrics about money, jobs and the lack thereof. But Waits' music draws on the sweep of American history, early rock 'n' roll, old Mexican ballads and vaudeville-era pop, and you realize that these themes are depressingly eternal. Waits also sings about the power of love; about Eisenhower, Elvis and Wolfman Jack; about unlucky bodies piled up at the morgue; and, in a chilling song called "Hell Broke Luce," about a damaged soldier furiously trying to comprehend what he's lost, and the reasons why.

At this point, Waits seems to be like Woody Allen: so respected by his peers that truly legendary artists come out for his projects. Keith Richards of The Rolling Stones is featured in "Hell Broke Luce," along with Marc Ribot, an old Waits crony who might be America's greatest session guitarist at the moment. But Waits is an auteur just like Allen, and all the players ultimately serve his vision. Waits is an old pro singing slightly freakish songs — which, after a couple of listens, reveal themselves as not so freakish at all. Just human.