Accessibility links
3 Pulled Out Alive From Turkish Quake Rubble Two teachers and a university student were rescued from ruined buildings in eastern Turkey on Wednesday, three days after a devastating earthquake, but searchers said hopes of finding anyone else alive were rapidly fading. 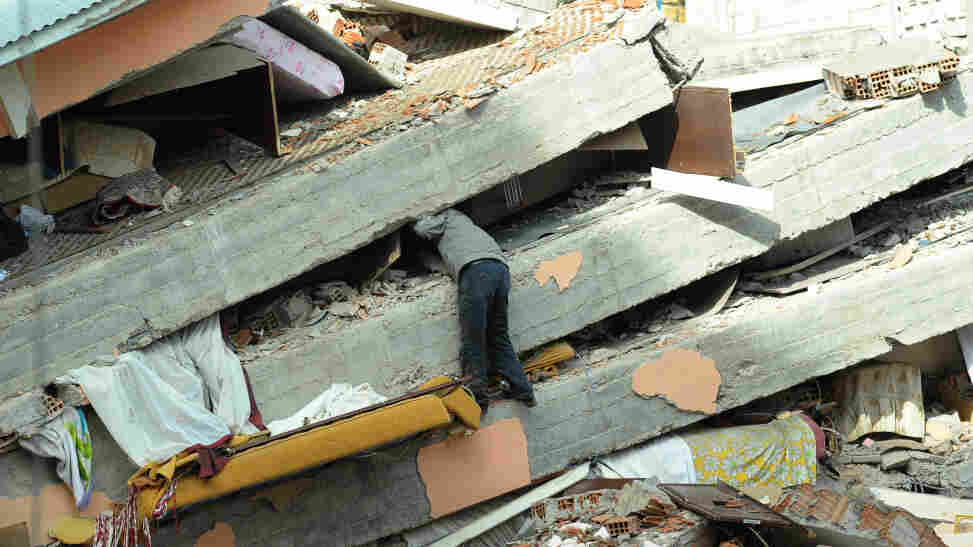 A Turkish men searches through the debris of his collapsed building in Ercis. 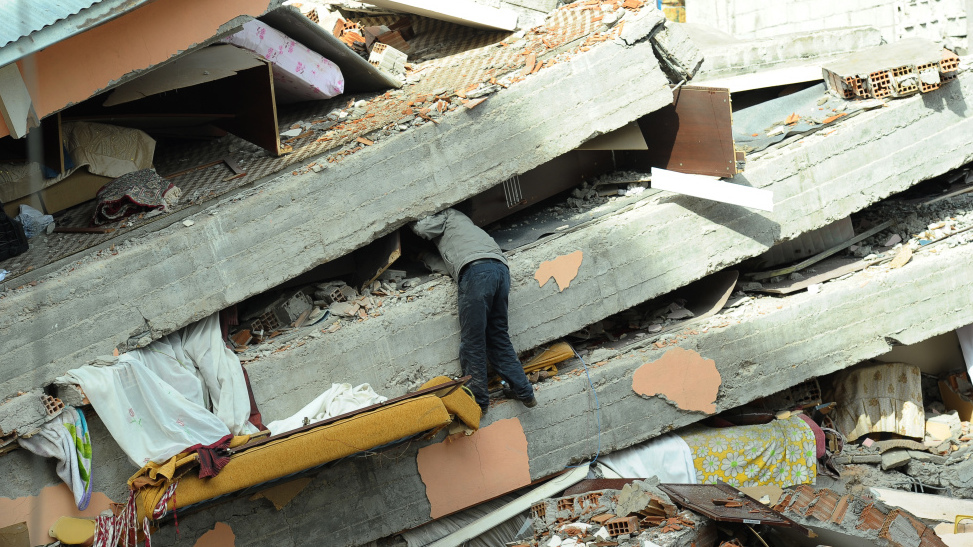 A Turkish men searches through the debris of his collapsed building in Ercis.

Two teachers and a university student were rescued from ruined buildings in eastern Turkey on Wednesday, three days after a devastating earthquake, but searchers said hopes of finding anyone else alive were rapidly fading.

NTV television said 25-year-old teacher Seniye Erdem was pulled out around the same time that rescue workers also freed another teacher. The woman was thirsty and asked about her husband, who had died, it said

Excavators with heavy equipment began clearing debris from some collapsed buildings in Ercis after searchers removed bodies and determined there were no other survivors. The 7.2-magnitude quake Sunday has killed at least 461 people and injured over 1,350.

"At the moment, we don't have any other signs of life," said rescuer Riza Birkan. "We are concentrating on recovering bodies."

Still, rescue efforts continued in some areas of Ercis, the worst hit town in the temblor that also rattled Iran and Armenia.

Gozde Bahar, a 27-year-old English teacher, was pulled out of a ruined building on Wednesday with injuries as her tearful mother watched anxiously. The state-run Anatolia news agency said her heart stopped at a field hospital but doctors managed to revive her.

Earlier in the day, rescuers pulled out 18-year old university student Eyup Erdem, using tiny cameras mounted on sticks to locate him. They broke into applause as he emerged from the wreckage.

Turkey's prime minister, Recep Tayyip Erdogan, said 63 teachers were among the dead and he alleged that shoddy construction contributed to the high casualty toll. He compared the alleged negligence of some officials and builders to murder because they ignored safety standards.

"Despite all previous disasters, we see that the appeals were not heeded," Erdogan said.

He acknowledged problems in sending aid for thousands of people who were left homeless, but said close to 20,000 tents have since been sent to the quake zone. Turkey has said it will accept prefabricated homes and containers from other countries to house survivors, many of whom have slept in the open in near-freezing temperatures for three nights.

"There was a failure in the first 24 hours, but in such situations such shortcomings are normal," Erdogan said. "There may not be sufficient equipment in depots at the start, but these have (now) been resolved with equipment from other depots."

The quake destroyed one school and Turkish engineers were making sure other schools were safe or rendering them fit to resume lessons. Some 800 students at that school in Ercis were probably saved because the quake hit on a Sunday.

On Tuesday, some groups of desperate survivors fought over aid and blocked aid shipments while a powerful aftershock ignited widespread panic that triggered a prison riot in a nearby provincial city.

Health Ministry official Seraceddin Com said some 40 people were pulled out alive from collapsed buildings on Tuesday. They included a 2-week-old baby girl brought out half-naked but alive from the wreckage of an apartment building two days after the quake. Her mother and grandmother were also rescued, but her father was missing.

The pockets of jubilation were however, tempered by many more discoveries of bodies by thousands of aid workers.

On Wednesday, health officials said they had detected an increase in diarrhea, especially among the children, and urged survivors to drink bottled water until authorities can determine whether the tap water may be contaminated.

With thousands left homeless or too afraid to return to damaged houses, Turkey said it would accept international aid offers, even from Israel, with which it has had strained relations. Israel offered assistance despite a rift between the two countries over last year's Israeli raid on a Gaza-bound flotilla that killed nine Turkish activists.

Over 500 aftershocks have rattled the area. A 5.7-magnitude aftershock on Tuesday sent residents rushing into the streets in panic while sparking a riot that lasted several hours by prisoners in the city of Van, 55 miles (90 kilometers) south of Ercis.

On Wednesday, authorities transferred some 350 of the inmates to jails in other cities after prisoners, demanding to let out, set bedding on fire and the revolt spread inside the 1,000-bed prison, NTV television reported.

The region is mostly-Kurdish populated and an area where Kurdish rebels are waging an armed campaign for autonomy from Turkey. The conflict, which has killed tens of thousands since 1984, continued despite the quake. Suspected Kurdish rebels detonated a roadside bomb as a military vehicle drove by 50 miles (80 kilometers) from Van on Monday.

Turkey lies in one of the world's most active seismic zones and is crossed by numerous fault lines. In 1999, two earthquakes with a magnitude of more than 7 struck northwestern Turkey, killing about 18,000 people.

Istanbul, the country's largest city with more than 12 million people, lies in northwestern Turkey near a major fault line, and experts say tens of thousands could be killed if a major quake struck there.