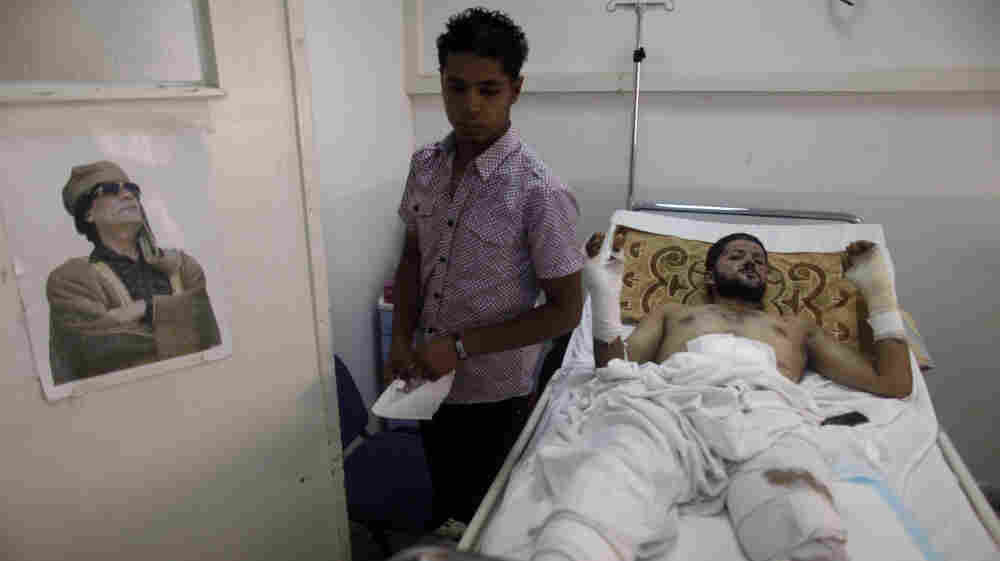 On an Aug. 10 tour organized by Moammar Gadhafi's governement, an unidentified man lies in a hospital bed in Tripoli. He was allegedly injured during NATO airstrikes a day earlier. 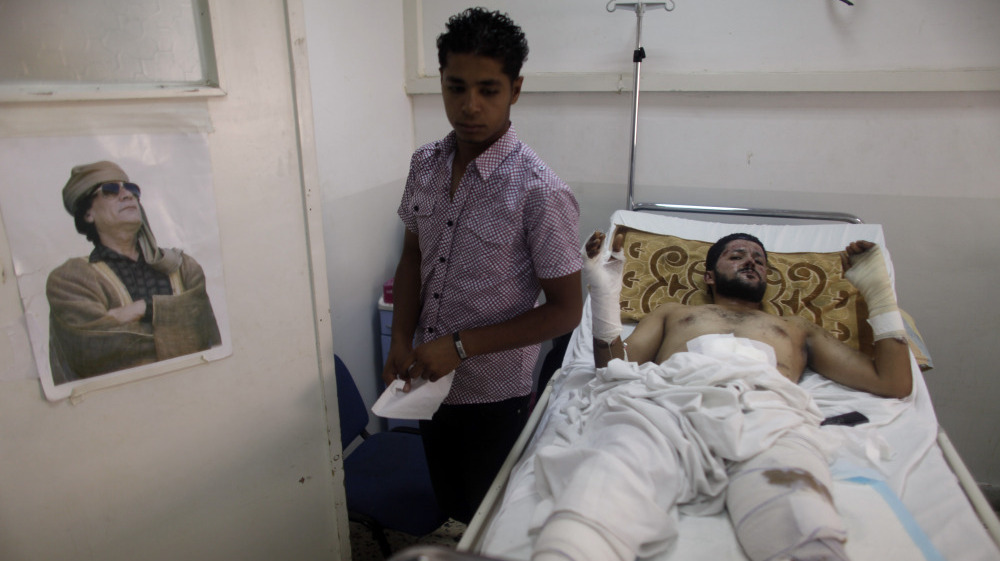 On an Aug. 10 tour organized by Moammar Gadhafi's governement, an unidentified man lies in a hospital bed in Tripoli. He was allegedly injured during NATO airstrikes a day earlier.

NATO's role in Libya was crucial to the rebellion that toppled Moammar Gadhafi, but that assistance came at a cost, according to some Libyans.

Mohammed Abueishi lives in the Souq al-Juma neighborhood of Tripoli, near an apartment building on a quiet residential street that was hit by a NATO airstrike a little after 1 a.m. on June 19.

"I was sleeping and suddenly there was an enormous blast and all the doors and the windows burst open. There was a huge amount of dust in the house," he said. "I stumbled out to find my uncle's house destroyed."

Another relative, Abdul Rahman al-Gharari, said five of his relatives were killed, including two children — one 9 months old, the other 2 years old.

NATO's mission in Libya was to protect civilian lives. But now that Gadhafi is gone, evidence is emerging that some bombing raids killed civilians as well as Gadhafi's fighters.

Residents in the Souq al-Juma neighborhood supported the Libyan revolution and say they have no reason to lie about what happened here.

We need to have NATO investigators looking into some of those allegations. Some of them may be false, but I am convinced some of them are true.

Souq al-Juma was well known for its opposition to Gadhafi. It was one of the first Tripoli neighborhoods to rise up against him, and the people say they consider the people who died in this NATO strike as martyrs, not victims.

It has been four months since the apartment building was hit by a bomb, and it is still a pile of twisted metal and rubble. The residents say they want an investigation into what happened.

Abueishi says there should be compensation and NATO should take responsibility for the deaths.

Unlike with other targets, NATO has admitted that it mistakenly hit this house.

But it says it has not been given any proof that civilians died in this NATO strike — or in any other — and it says it will not send investigators.

"We don't have any confirmation of any civilian casualties as a result of our operations," said Col. Roland Lavoie, the NATO spokesman for the Libya mission. "So, I could not give you a number because that number is essentially zero in terms of confirmed casualties resulting from our strikes."

He says the Gadhafi regime often lied about civilian casualties in its propaganda war.

"What was unfortunate in the situation in Libya is that the Gadhafi regime constantly made claims that were totally unsubstantiated and made no sense," he said. "So basically we could not give much value to the information that was given by the regime."

Residents in Souq al-Juma offered insight into how Gadhafi's government would try to stage-manage events.

Almost immediately after the strike on June 19, members of the international press corps, escorted by their minders, were brought to the scene.

"If I didn't, they said they would throw me out of my job," he said.

Neighbors tried to move the bodies from the site but they were told to leave them for maximum dramatic effect. And Gadhafi supporters who had no knowledge of the strike were bused in to give testimony to the foreign reporters. Though only five people are known to have died, the Gadhafi government at the time put the death toll at nine.

Gharari says he is grateful to NATO for all it has done for Libya.

Calls For An Investigation

But now that the Gadhafi regime is gone, people want the coalition to look into what happened in Souq al-Juma.

The Libya transitional government, though, is unlikely to push the issue. It has asked NATO to extend its mission and may not want to put its allies in an uncomfortable position.

Kristele Younes, who works with the Campaign for Innocent Victims in Conflict, says it is absurd for NATO to maintain that no one was harmed by its bombs.

"There hasn't been any conflict in history where civilians have not been harmed," she said. "We need to have NATO investigators looking into some of those allegations. Some of them may be false, but I am convinced some of them are true."