Accessibility links
Feds Asked Polar Bear Researcher To Take Polygraph A government researcher who wrote a controversial report on dead polar bears was asked to take a polygraph test by a federal agent investigating allegations of scientific misconduct. Some critics of the investigation say it will have a chilling effect on other investigators. 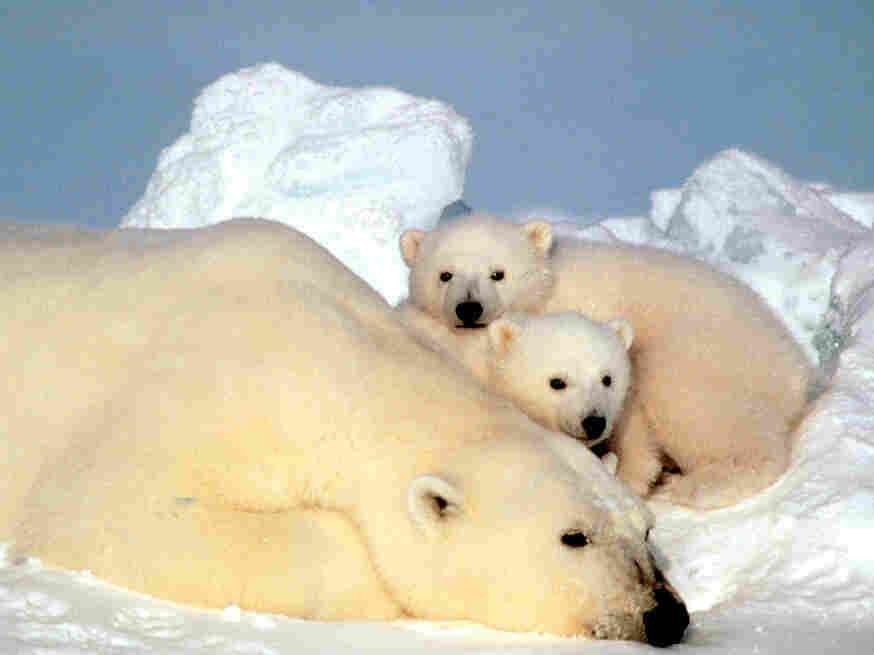 A researcher who wrote a famous report about dead polar bears was asked to take a polygraph test by a federal agent who has been investigating allegations of scientific misconduct. Above, a polar bear rests with her cubs on pack ice in the Beaufort Sea in northern Alaska. 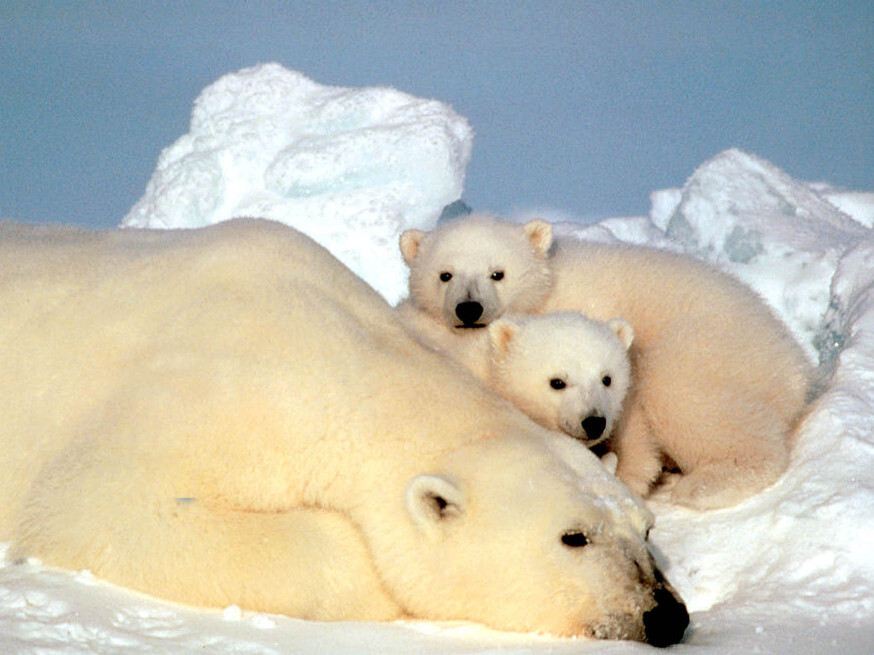 A researcher who wrote a famous report about dead polar bears was asked to take a polygraph test by a federal agent who has been investigating allegations of scientific misconduct. Above, a polar bear rests with her cubs on pack ice in the Beaufort Sea in northern Alaska.

A government researcher who wrote a controversial report on dead polar bears was asked to take a polygraph test by a federal agent investigating allegations of scientific misconduct.

That's according to Jeffrey Gleason's lawyer, Jeff Ruch of Public Employees for Environmental Responsibility, which is providing legal representation to Gleason and Charles Monnett, two researchers with agencies of the Department of the Interior.

In 2006, Monnett and Gleason published a report describing their sightings of apparently drowned polar bears in the Arctic. The report drew public attention to the plight of the bears as the climate changes and ice melts.

Last year, someone at the Department of the Interior alleged that acts of scientific misconduct may have been committed in relation to that report. The department's Office of Inspector General has spent months investigating, and does not typically comment on ongoing investigations.

Some critics of the investigation charge that the scientists were targeted for special attention because of their work's political implications; they say this investigation will have a chilling effect on other researchers.

During a second interview with Gleason on Oct. 26, according to Ruch, a federal agent asked the scientist about an internal routing slip — a slip of paper that various government officials initial after they review a manuscript — that had been attached to a different scientific report. That report was also related to long-term changes in polar bear habitats. It noted that in recent years, bear sightings associated with ice have decreased while sightings associated with land and open water have increased.

Gleason was asked whether he deliberately tried to hide that routing slip from investigators and if he would take a polygraph test, says Ruch, who adds the routing slip was just a third of a page; it was misplaced as Gleason photocopied a variety of documents to provide to investigators, Ruch says.

The routing slip, which Ruch emailed to NPR and posted on his organization's website, shows that officials signed off on this scientific report. One handwritten comment asked: "Are there enough data to make these statements? Was survey protocol the same thru the 26 years? (esp. as regards pol. bears.)"

Ruch says these questions were answered in subsequent correspondence. He says the discussion of that routing slip took up nearly a half-hour of the two-hour interview with Gleason.

"There appears to be kind of a desperate, almost fierce nature to pursue this until they find something," Ruch says, "which is why we think they have seized on this idiotic routing slip issue." He says Gleason wouldn't take a polygraph unless the agent would as well.

He says investigators also charged that just days before Gleason and Monnett made their sightings of apparently drowned polar bears, other researchers also saw dead polar bears floating in the water. But, according to Ruch, scientists said those sightings were neither recorded nor reported.

If that is true, says Ruch, the scientists were unaware of it when they wrote their famous report describing what they called "the first observations of polar bears floating dead offshore."

Investigators also spent considerable time asking why the role of weather was not more emphasized in the scientists' report as a possible contributor to the bears' deaths, Ruch says. "And so you have these criminal investigators asking questions as if they were the journal editors, as to why it was given greater prominence in a certain section in an earlier draft," he says.

Ruch accuses the investigators of taking issues raised during the normal scientific peer-review process and acting as though they constitute evidence of wrongdoing. He has filed a complaint with the department under its new scientific integrity policy, saying these issues should be investigated not by the Office of Inspector General, but by a review performed by other scientists.

The acting inspector general for the Department of the Interior, Mary Kendall, recently said in a letter to a senator that though her office would like to be able to respond to allegations by PEER and other outside entities, it cannot comment until its investigation is complete, because to do so would be unfair to all parties involved.