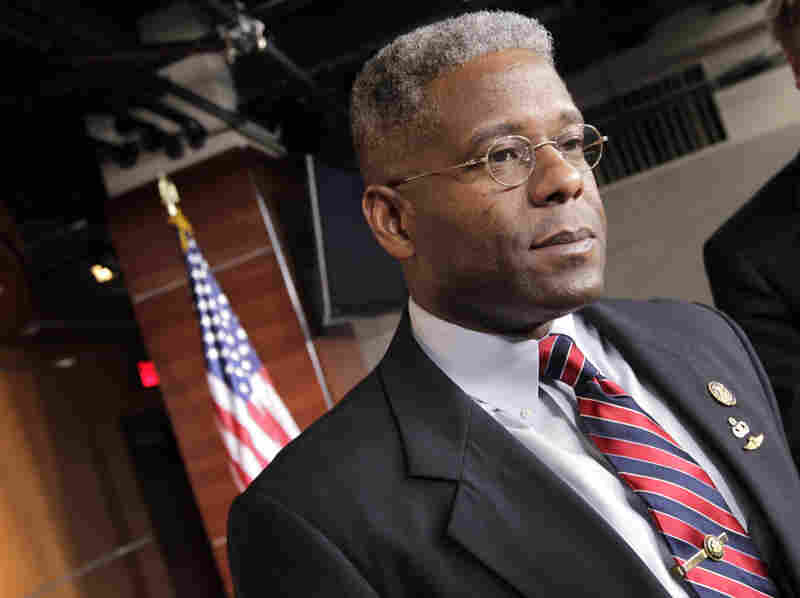 Rep. Allen West, R-Fla., shown in July, has drawn controversy for his comments about Islam. A Muslim activist in South Florida has devoted himself to challenging West's views. 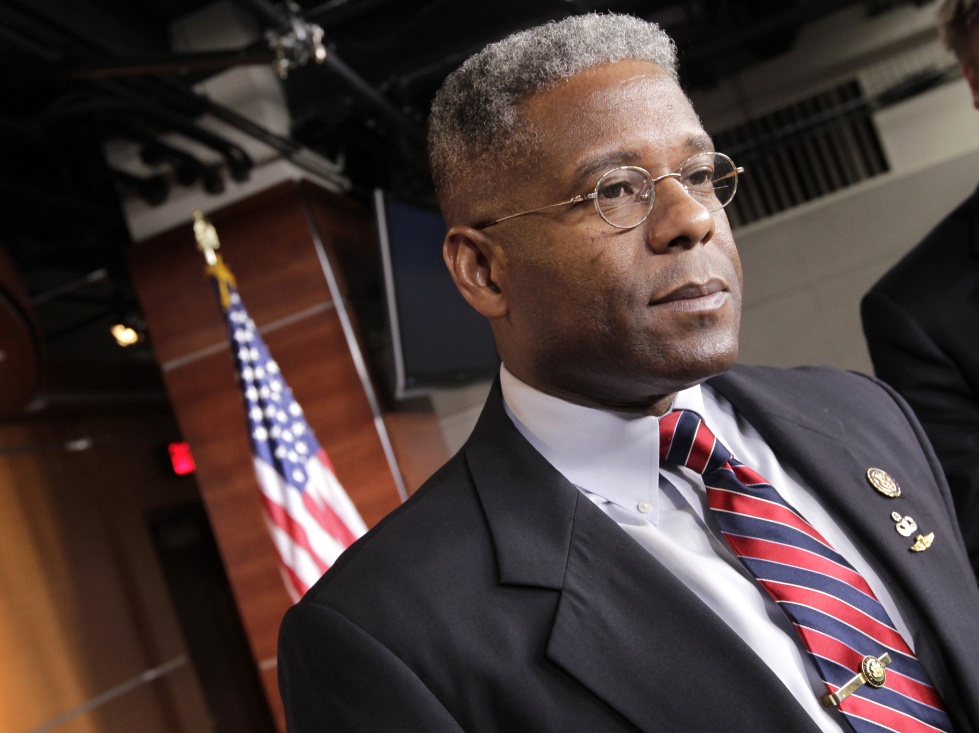 Rep. Allen West, R-Fla., shown in July, has drawn controversy for his comments about Islam. A Muslim activist in South Florida has devoted himself to challenging West's views.

Since he was elected last year, West has become a strong voice on Capitol Hill for fiscal restraint, socially conservative values — and responding to the threat posed by Islamic extremists.

On the topic of Islam, West has been particularly controversial. He calls it not a religion but a "theocratic political ideology" that's a threat to America.

Nezar Hamze, a Muslim activist in South Florida, has devoted himself to challenging West's views. Hamze is the director of the South Florida office of the Council on American-Islamic Relations, or CAIR. It's a civil rights organization headquartered in Washington that has long sought to spread information and dispel myths about Islam.

Hamze says it was with that purpose that he went to one of West's town halls in February. It was captured on video and posted to YouTube by a West supporter.

Hamze brought with him a Quran. In an interview recently, he said he wanted to ask West to explain a statement he'd made at a conference while serving on a panel discussing national security.

Hamze went to the town meeting to ask West to defend his views on Islam. He found that West, a former Army lieutenant colonel, is a keen student of military history who doesn't step away from a challenge.

West said "there is talk about killing infidels" in the Quran and reeled off a history of violent conflicts between Muslims and non-Muslims to applause from his supporters. 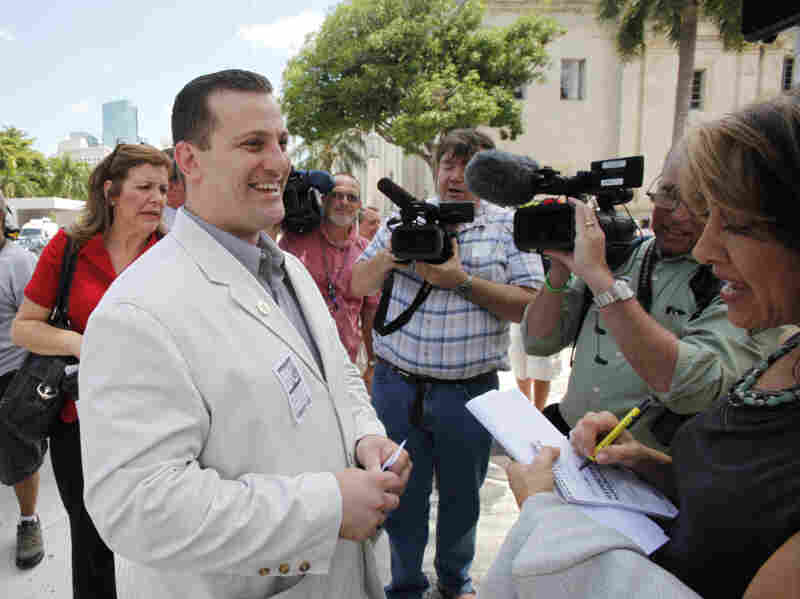 Nezar Hamze, director of the Council on American-Islamic Relations in South Florida, talks to members of the media in May. Hamze says he wants to talk to Rep. Allen West about the congressman's views on Islam and discuss the larger context of the passages he sometimes quotes from the Quran. 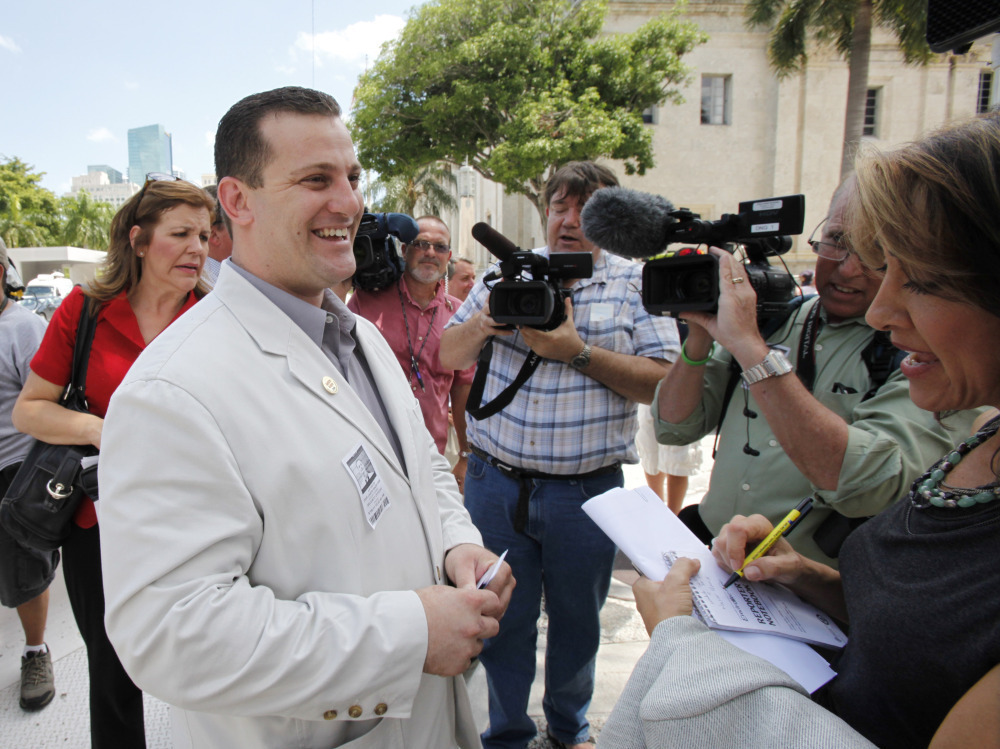 Nezar Hamze, director of the Council on American-Islamic Relations in South Florida, talks to members of the media in May. Hamze says he wants to talk to Rep. Allen West about the congressman's views on Islam and discuss the larger context of the passages he sometimes quotes from the Quran.

Hamze has attended four of West's town meetings and sought — unsuccessfully — to have a private discussion with him. Hamze says he wants to talk to West about the congressman's views on Islam and discuss the larger context of the passages he sometimes quotes from the Quran.

"To make him understand that discrimination and bigotry is real. And his comments are irresponsible and it fuels that bigotry and intolerance," Hamze says.

West declined to comment on Hamze's charges, or on his refusal to meet with the activist. In a letter he sent to Hamze, West says he's not anti-Islam, but he is concerned about what he calls the "radical element of Islam that presents a dangerous threat" to the U.S.

West says meeting with Hamze would be "further legitimizing an organization with questionable associations."

One of West's supporters, Joe Kaufman, an activist running for Congress in an adjoining district, says he believes CAIR has ties to terrorist organizations.

CAIR officials dismiss Kaufman's charges as "ridiculous," saying their organization has never had anything to do with terrorism. More than a decade ago, those groups were included on a list of charities it referred people to, CAIR says. It stopped doing so when the charities were indicted by federal prosecutors.

Hamze calls the people who are making those claims Islamaphobes. Last month, he sent a letter to West asking him to sever ties with those individuals and groups. West surprised even Hamze with his one-word response: "NUTS!"

It's in part to address those and other similar charges that Hamze recently took a new tack — he applied to become a member of the local Republican executive committee.

Hamze is a registered Republican. As a devout Muslim, he says he's a social conservative. One of his first political heroes, he says, was Ronald Reagan. In attempting to join the Broward Republican Executive Committee, he says, he was trying to carry a message.

"There are Muslim Republicans out there," Hamze says. "We do support you, but we want your support as well. We want you guys to, at minimum, not engage in stereotyping and baiting of Muslims."

As with his effort to meet with West, that attempt ended in failure. He was the only candidate out of 11 asking to join the committee who was rejected that night.

The chairman of the Broward Republican Executive Committee, Richard DeNapoli, says it's unusual for candidates to be rejected, but that committee members were well aware of Hamze and his history with West.

"I really don't think this had anything to do with religion," DeNapoli says. "It's just that this was a widely known circumstance where he had made statements against Allen West, and the members reacted to that."

CAIR officials say they have good relations with other Republicans, but that in South Florida at least, the Republican Party and their Tea Party supporters have made Muslims feel unwelcome.

But Hamze is not done trying to change things. He says he is planning now to seek approval from state party leaders to start a Muslim Republican club in Broward County.