Accessibility links
'Janie Jones': Family Harmony Takes Practice A hard-drinking indie rocker gets a visit from a rehab-bound ex-girlfriend — and the 13-year-old she says is his daughter — in a film whose central performances have a lightness that help compensate for a formulaic plot. 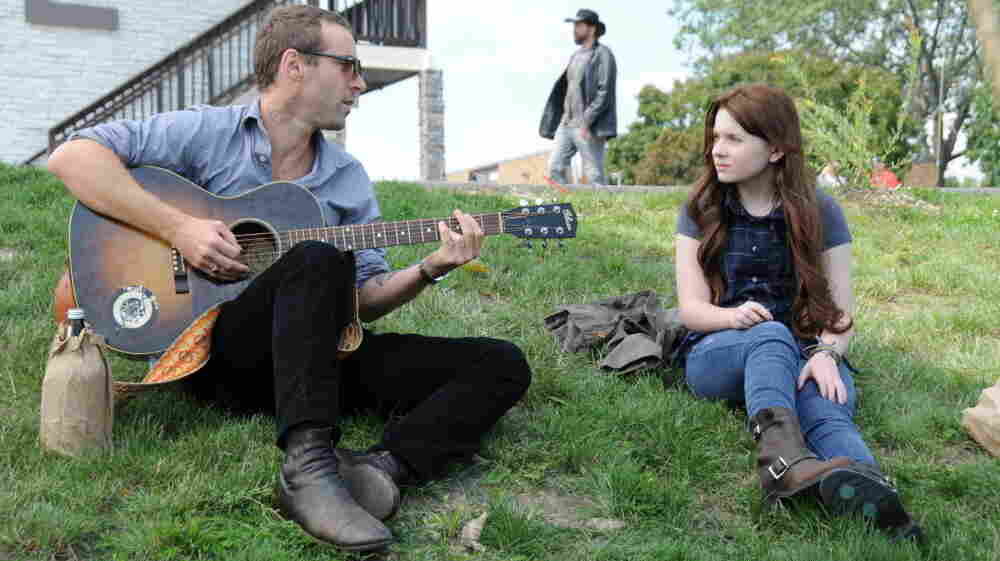 Suddenly, A Duet: Rocker Ethan (Alessandro Nivola, left) discovers he has a teenage daughter (Abigail Breslin), when her ex-groupie mother dumps her with him on the way to rehab.

The Clash's "Janie Jones" describes a character with a handful of loves — rock 'n' roll, getting stoned, and a woman named Janie Jones — and one dislike: his boring job. In David M. Rosenthal's film of the same title, Alessandro Nivola plays Ethan, a declining 30-something rock star who's a boozer, not a stoner. He seems fairly ambivalent about rock 'n' roll, despite the modest fame he enjoys thanks to his music; for the most part, it's become the boring job. As for Janie Jones? Her he doesn't know at all.

Like Ethan's dwindling celebrity, Janie (Abigail Breslin) is a byproduct of his musical career, a child born to a former groupie after a brief dalliance. Showing up at a gig with the now 13-year-old Janie in tow, said ex-groupie (Elisabeth Shue) drops the you've-got-a-kid bomb on Ethan, then follows up with the news that she's checking into rehab and needs him to take custody. Before Ethan has even fully accepted that Janie is his child, Shue's Mary Ann has skipped out, leaving him with little choice but to take Janie on the road.

The film's messy first half is a chronicle of a kid thrown with little warning into a group dynamic already swirling with discord. With the band squabbling over everything from Ethan's drinking to song tempos, she's consistently the most mature person in any room — a necessity learned from growing up with a drug-addled mother. Her presence calms the arguments slightly, if only because no one wants to fight in front of her, and she also has a penchant for always being just around the corner, strumming a calming song on her guitar, whenever people are nearing the boiling point. (Whatever musical talent made Ethan famous to start with seems to have been passed on to his daughter.)

If the wiser-than-her-years kid is a cliche, it's probably the least lazy one in the film's opening half. There are shifting secret alliances and onstage meltdowns (complete with the accompanying YouTube humiliations); there are the obligatory show montages. Ethan's bandmates are cardboard cutouts from the catalog of rock stereotypes: the level-headed peacemaker; the passionate music lover with no patience for the drama; the talented but disloyal guitarist-for-hire; the girlfriend on keyboards. Trying to rein them all in, there's the opportunistic and two-faced manager, played here by a nearly unrecognizable Peter Stormare, hiding behind a thick bootblack beard and needlessly portentous black cowboy hat. Even the band's songs in this section seem generic and uninspired.

Luckily, all that discord is leading to a complete breakdown, necessitating the departure of the entire supporting cast. When things hit bottom, Ethan is left with no one around but Janie, and the film improves considerably. They don't get any less predictable, mind you: The plot points of this redemption story are as well-worn as an old guitar strap, and if you caught Crazy Heart, you've already seen a less contrived version of this material.

But once it's reduced to a two-hander for Nivola and Breslin, Janie Jones has a lightweight sweetness, owing largely to their chemistry. Breslin remains as charismatic and instantly likable as she was in her Oscar-nominated role in Little Miss Sunshine, and the often under-the-radar Nivola shows the makings of a star — if only he could get roles this big in movies better than this. Even the music (Janie's songs by Irish singer-songwriter Gemma Hayes, Ethan's by Eef Barzelay of the alt-country band Clem Snide) improves when it's down to these two.

The template here isn't up for much revision; you won't have to guess how Ethan's attitudes toward music, drink, his job or Janie shift by the end of the film. But even the most familiar pop song can strike a chord with the right blend of voices at the microphone.