Accessibility links
'The Double': In From The Cold War, A Retro Thriller In this spy thriller, a retired CIA operative (Richard Gere) teams up with a rookie FBI agent (Topher Grace) to investigate the brutal killing of a U.S. senator who had business ties to Russia. 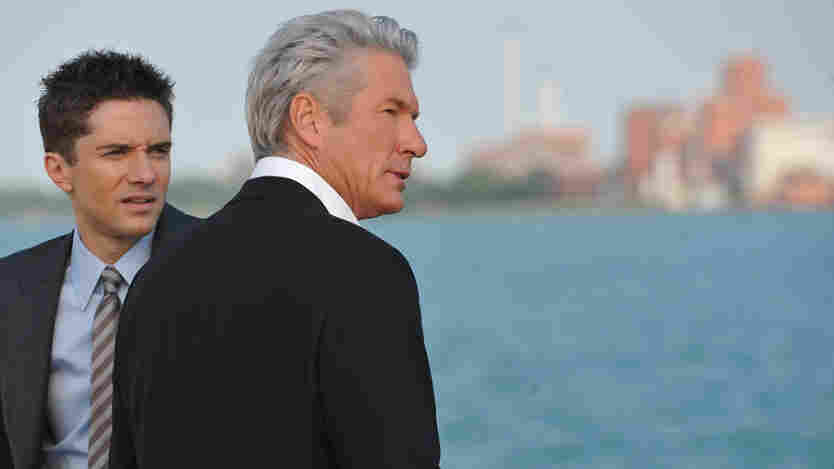 Rated PG-13; for some actions of violence, disturbing images and language

Early on in the wacky but watchable espionage thriller The Double, a U.S. senator drops the slightly surprising news that a resurgent Red Peril has waltzed right under the radar of the FBI and the CIA, who've been focusing on Middle East terrorism. It would seem the Russians are coming again, this time in the form of KGB toughs slipping across the border with Mexican immigrants, then hot-footing it to Washington to monkey with American intelligence.

But beyond a few mumbled warnings about a refreshed nuclear threat, it's never made clear why Russian secret agents would have time or reason to moonlight on the Beltway; they're pretty busy watching over Prime Minister Putin while he deep-sea dives for fake treasure. Never mind: It's been a while since Hollywood dusted off this particular bogeyman, and those who mourn the passing of the Cold War spy thriller — together with anyone eager to welcome back Richard Gere in iron-man mode — will be happy to play along.

Looking very Ralph Lauren in crisp white shirt and crisper white hair, Gere runs, stalks and kills his way through The Double with a taut conviction as Paul Shepherdson, a sad-faced retired CIA operative who likes to drop in on neighborhood Little League games even though he's childless.

But if you're thinking pedophile, don't go there. When a politician is found elegantly garroted in the signature manner of "Cassius" — a Soviet assassin Shepherdson claims he dispatched years before — the former operative is dragooned by the CIA chief (Martin Sheen, channeling Bartlett yet again) into fresh pursuit. It doesn't help that the streetwise Shepherdson is paired with Agent Geary (Topher Grace), a spike-haired young FBI suit who wrote his master's thesis on Cassius at Harvard and represents everything the older company man despises about the new professionalism.

Do we smell blooming bromance, something more oedipal, or a garden-variety psycho staking out his prey? You'll have to work hard to care, given the absence of chemistry between the woefully flavorless Grace and the veteran Gere, who only has to narrow those beady little eyes for charisma to spray in all directions. There are many stars handsomer than Gere, but few with his feral physical grace — or the barely contained ferocity, lightly touched with little-boy-lost, that has made him such a draw for men and women. You'll want to know what made Shepherdson the way he is today, but it's hard to give a fig about what happens to Agent Geary, even when a sudden left turn in the endlessly thickening plot requires him to come into his own.

Ordinarily, we'd have to wait out the movie to find out why someone like Shepherdson keeps glancing over his shoulder even when he's home safe in Washington. But first-time director Michael Brandt, who co-wrote The Double with Derek Haas, spills the beans early, placing us in the pleasurably awkward position of knowing more than Geary does even as we nervously brace for fresh surprises.

The Double moves capably toward a bloody final reckoning set in the predictable dual landscapes of sleek government offices and cavernous abandoned warehouses. Still, it's hard to get one's paranoia in gear for a scenario so perversely peripheral to our current fears of foreign menace. Why (unless it's because the film was partly funded out of Abu Dhabi) is Washington swarming with granite-jawed Russians, except as a mash note to the espionage thrillers of the 1970s? The story makes no sense and leads nowhere but into a creaky buddy movie that can't round itself off without a last-minute hero falling on his sword to save another. Not to be picky, but isn't a psychopath who feels shame and guilt just a regular old spy-world pro — in which case he gains our sympathy but forfeits our curiosity?