Accessibility links
Bangkok At Risk Of Its Worst Flooding In Decades It's been raining heavily for months in Bangkok, and the river that runs through the city is spilling over its banks. The government has declared a five-day holiday and urged residents to leave the sprawling city. 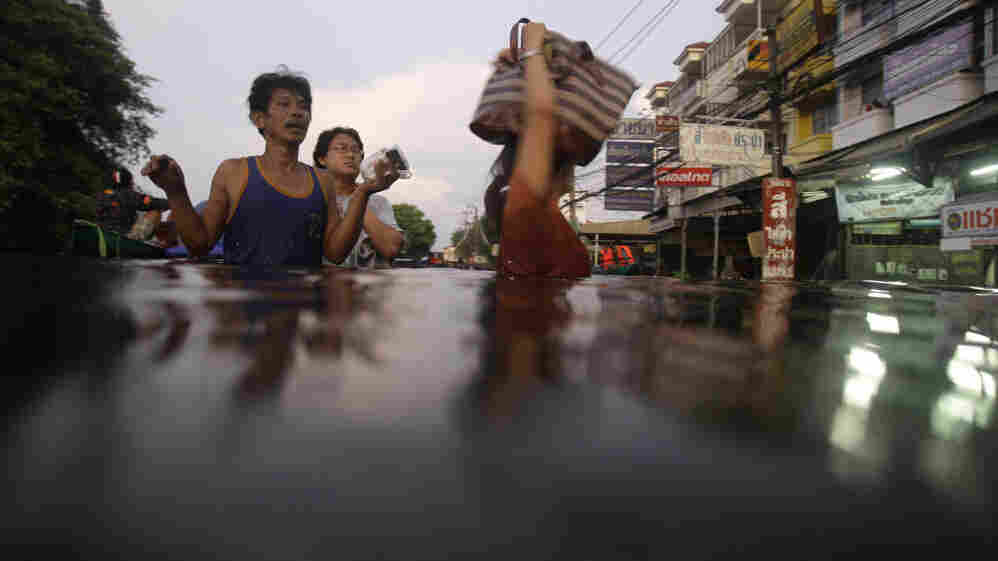 Residents wade along a flooded street on the outskirts of Bangkok on Thursday. Clambering aboard bamboo rafts and army trucks, residents fled their homes as high waters moved closer to the heart of the city.

Panic buying has left grocery shelves empty of basics. Many are fleeing the city, and many areas are virtually empty. The government has declared a five-day holiday to encourage people to leave Bangkok for higher ground. On Thursday, the government said it was no longer a question of if, but when the floods would come.

At Bangkok's iconic Oriental Hotel on the banks of the Chao Phraya river, the musicians in white tuxedos in the lobby were putting a brave face on things. It was a little like the band on the Titanic — right after it hit that nasty piece of ice.

Outside, though, a construction crew was working overtime to buttress the utilitarian yet semi-elegant flood wall hastily erected to keep the water at bay.

The river was about eight inches below the hotel's main outdoor dining area on Wednesday. On Thursday, with rising tides from the south and the torrent of water from the north, the river was clearly winning. And with the lunar high tide expected Friday, a potential disaster was lapping at the door.

She says the government will do all it can to mitigate the damage in what looks to be the worst flooding to hit Thailand in more than five decades. Three months of torrential rains have left large parts of the countryside virtually underwater. Now the capital faces a similar danger. 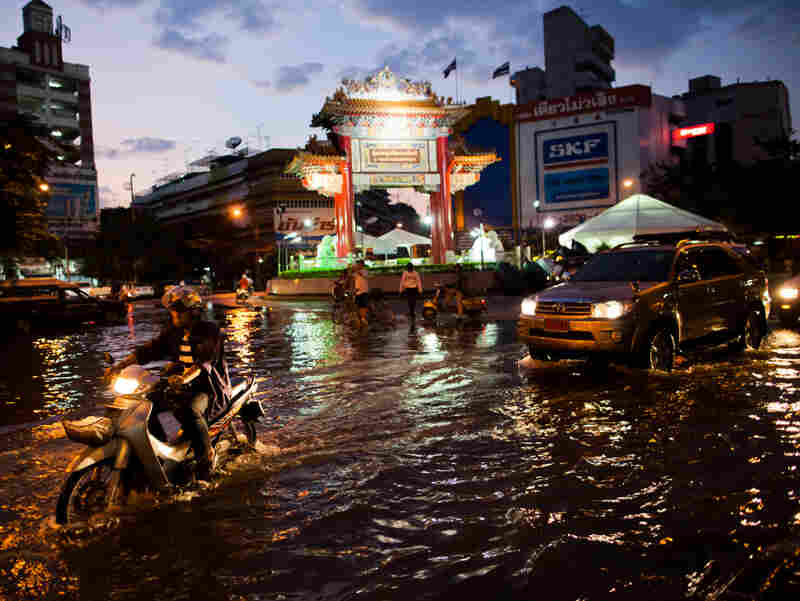 Residents drive through a flooded street close to the overflowing Chao Phraya river in Bangkok on Thursday. About 400 people have died from floods in the country since late July. 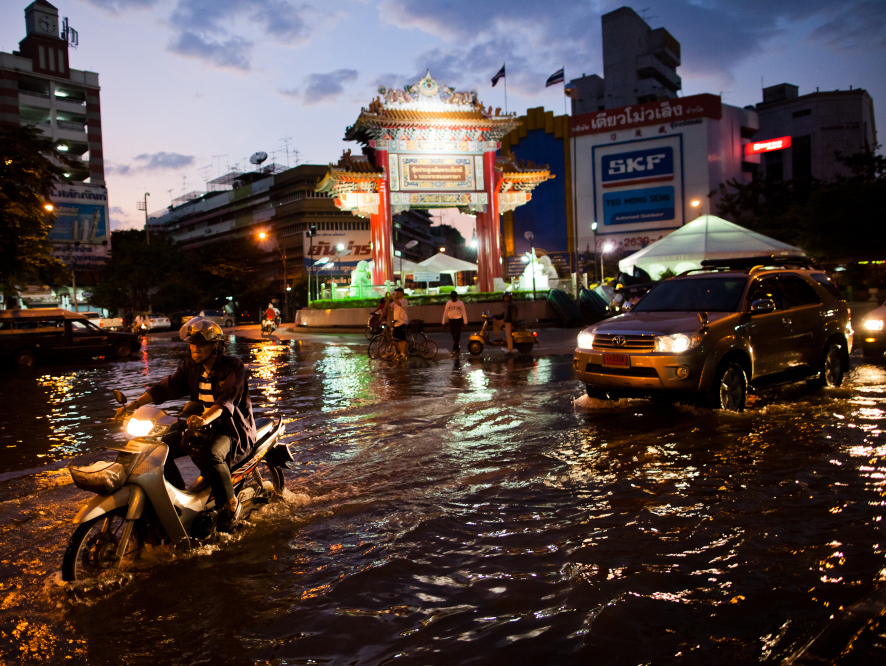 Residents drive through a flooded street close to the overflowing Chao Phraya river in Bangkok on Thursday. About 400 people have died from floods in the country since late July.

That's bad news for Thai workers everywhere. Car manufacturers and computer hard-drive makers have been hard-hit by the floods in factories to the north of Bangkok. Shortages of car and computer parts worldwide are likely to last well into next year. And many local jobs are now at risk, at least in the short term.

Suwit Amkha works at a printing company just outside the city and has been slogging his way to work through thigh-deep water for three weeks now. The factory where he works was still dry, but he was forced to abandon his apartment.

He moved his most sacred belongings — mostly images of the Buddha — to his sister's place on the 12th floor of a building inside Bangkok's city limits. But he worries what will happen when he tries to go back to work.

"I don't know if the factory will be underwater when I get there," he says. "I don't know if my boss will pay me for the time I miss if he's forced to shut down. If I go there tomorrow, and the factory is closed, then I'll go back home [outside Bangkok] to see my wife and my new baby." It's a lot better, he says, than waiting around for the waters to recede.

And then there are those who make their living in the tourist business. Ratya Thongtamlung, who has owned her travel business for eight years, says her cancellations of the past week have outstripped those caused by the political crises over the past three years.

She blames the government for mishandling the situation. The new prime minister is a political novice who is not up to the job, she says. But others, including some environmentalists, say it was only a matter of time before rampant overbuilding in the flood plain, along with Bangkok's rapid development, forced the issue.