Accessibility links
Chinese Using Twitter In Human Rights Cases Chinese authorities keep tabs on activists in the streets and on the Internet. But microblogs are now drawing attention to some human-rights cases. 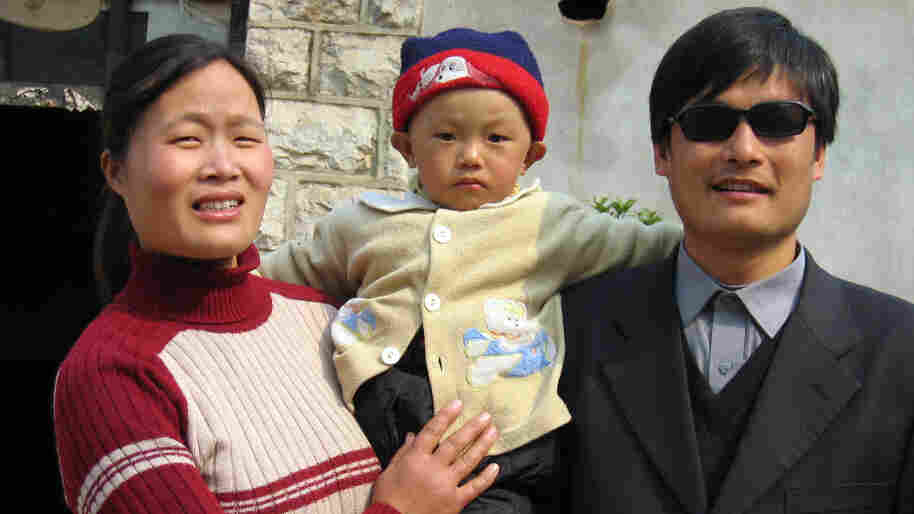 Blind activist Chen Guangcheng with his wife and son outside their home in northeast China's Shandong province in 2005. He's been held incommunicado at his home for more than a year and has become the focus of a microblog campaign by human-rights activists. 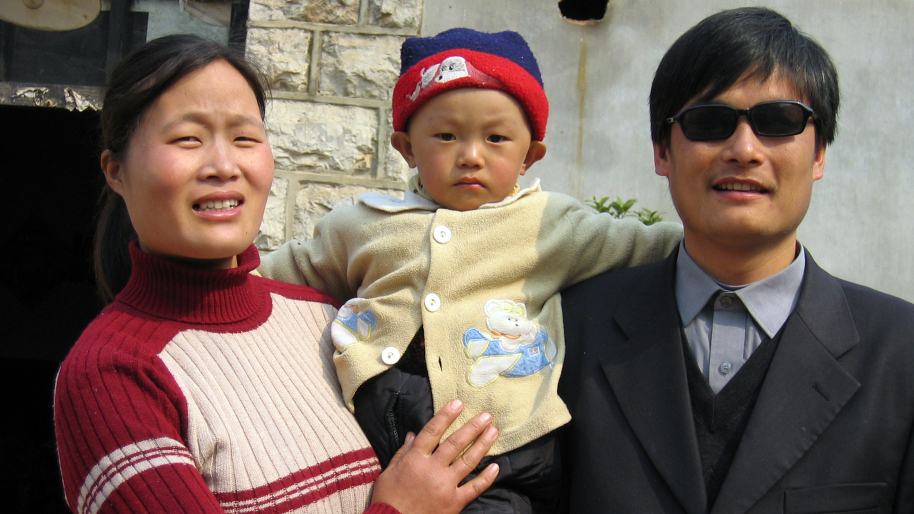 Blind activist Chen Guangcheng with his wife and son outside their home in northeast China's Shandong province in 2005. He's been held incommunicado at his home for more than a year and has become the focus of a microblog campaign by human-rights activists.

In China, microblogs are transforming the way activists draw attention to human-rights cases. Despite strict Internet controls, netizens are using Chinese Twitter as a powerful tool.

Two recent cases show just how effective microblogs can be in shaping the debate over human-rights abuses and driving citizen activism.

One case involves a chilling video that was recently released online. In it, a man lies under a green quilt, apparently naked. His left eye and right ear are covered with bandages; the skin on his feet is discolored and peeling.

"Are you Yang Jinde?" asks a voice. "I'm the lawyer appointed by your family."

His voice quavering, Yang Jinde describes a litany of torture at Nanyang police dog training center in China's central Henan province. He said that after his arrest last year, police tried to force him to confess to crimes that he says he did not commit.

"They put people in dogs' cages, leaving only their heads outside, sticking out from the cage. Then they got police dogs to lick the heads. It's so scary, people wet their pants," says Yang.

Yang, 43, says his feet were burned with a cigarette lighter; he was tortured until he was paralyzed; he went blind in one eye and deaf in one ear after being beaten; and he was denied medical care. In the video, he says he was denied food for 12 days, and police shone a bright lamp toward his eyes, preventing him from sleeping.

Yang's troubles began after he had a business dispute with a landlord from whom he was renting a building for his car dealership in Henan. A court ruled against Yang, but he didn't hand over any money.

The court then removed about 80,000 yuan ($12,500) from his bank account. Yang and his employees staged a protest, which turned violent, in front of the local courthouse and later went to Beijing to petition.

After his return, he was taken to the police dog training center in Nanyang, Henan, where the alleged torture took place. At trial, Yang was found guilty of leading a gang and given 21 1/2 years in prison.

The lawyer who shot the video, Zhu Mingyong, filmed it inside the detention center where Yang is serving his sentence. He says he can't vouch for Yang's claims. But he says Yang went into detention able to walk, with full control of his body. And he later saw Yang being carried into the detention room and into trial, unable to walk. The lawyer said he'd never seen such a thing happen before in his years of practice. He shot the video out of desperation. 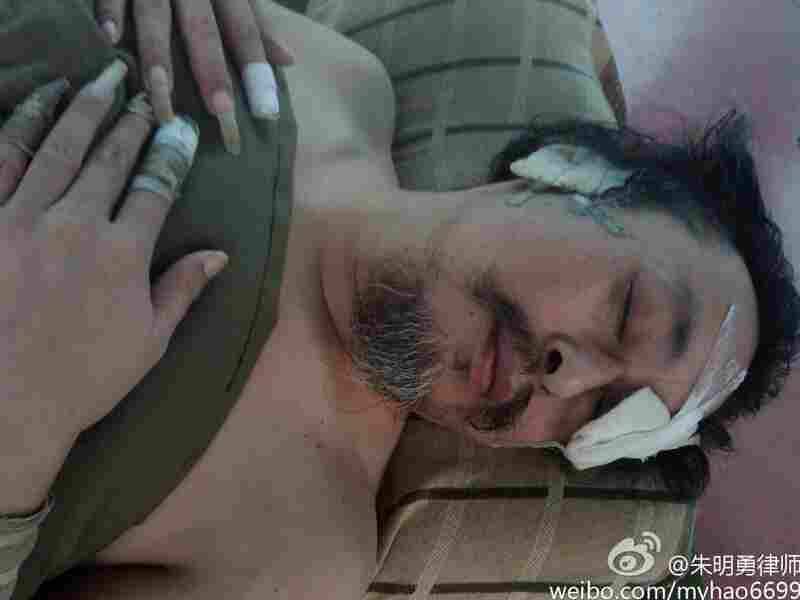 Yang Jinde says he was tortured in a police dog training center, leaving him blind in one eye and deaf in one ear. These pictures were taken by lawyer Zhu Mingyong inside a detention center, where the lawyer also shot a video of Yang that has gone viral. 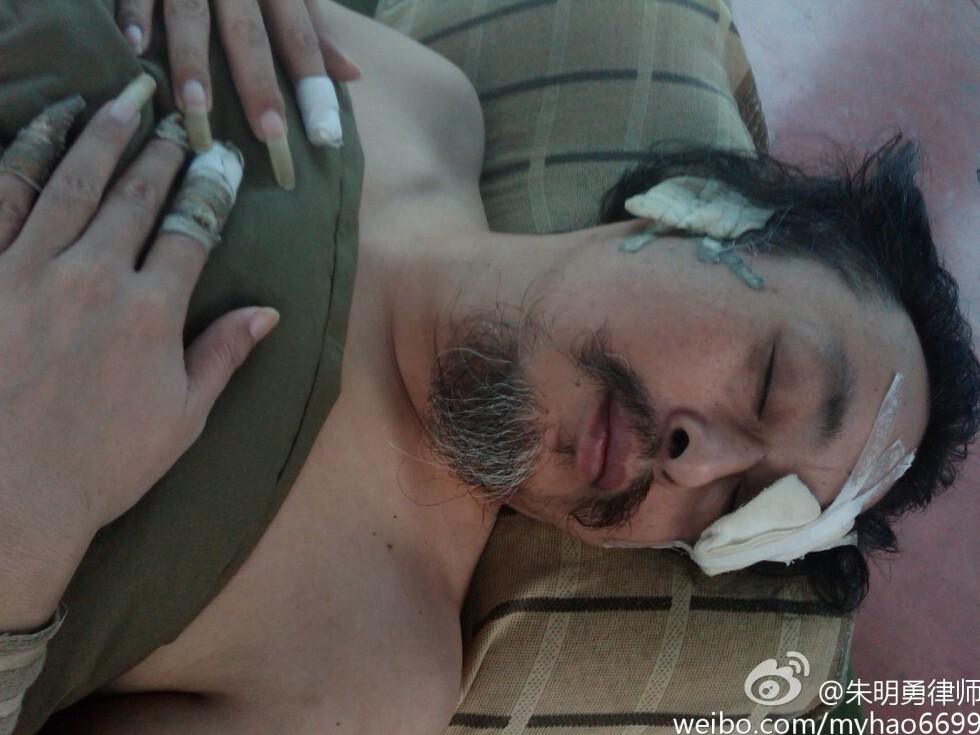 Yang Jinde says he was tortured in a police dog training center, leaving him blind in one eye and deaf in one ear. These pictures were taken by lawyer Zhu Mingyong inside a detention center, where the lawyer also shot a video of Yang that has gone viral.

"Yang's former lawyer tried reporting his situation to the courts and the relevant departments, but nothing happened," Zhu told NPR. "We released this publicly, to raise attention from ordinary people and China's leaders. His situation has been like this for more than a year. I haven't seen him since the tape was released, but it should have a good effect."

But, propelled by her tweets, the video of her brother has gone viral, with the case covered in state-run media including the Shanghai Daily.

Josh Rosenzweig, an independent researcher on Chinese human rights based in Hong Kong, says this bottom-up pressure is changing the debate.

"Certainly over the past few years there's been a growing focus on these kinds of abuses by Chinese police, thanks to a more commercialized muckraking Chinese press and the more freewheeling Internet environment," Rosenzweig says.

"Since the rise of the Internet, blogs and Twitter, we the people have our own voice." Those are the words of Chen Guangcheng, a blind lawyer, age 39, who has been held mostly incommunicado in his house since being released from prison in September 2010.

Chen had angered local authorities by exposing a campaign of forced abortions. But his prison term of four years and three months had been for "damaging property and organizing a mob to disrupt traffic."

After being released from prison, he was returned to his own home in Dongshigu village, Linyi, in China's northwest Shandong province. There, he and his family have had their movements severely restricted and are watched around the clock. He secretly recorded a video recounting these harsh restrictions, which was smuggled out and posted online. In retaliation, he was badly beaten. But he has become the center of a microblog campaign.

A number of prominent intellectuals have recorded videos about Chen, including one by writer Ye Fu, calling the case "the most shameful page of history." A website has also sprung up calling for people to upload pictures of themselves in dark glasses, as a show of support for the blind lawyer, who always wears sunglasses. And photos are being posted online of guerrilla actions — for example, the hanging of a banner outside the Shandong provincial office in Beijing that declares that the local government is "blackening China's reputation."

Visits To A Village

But the actions that have gained the most attention have been visits by groups of Internet users to Dongshigu village, where the blind lawyer lives under the glare of surveillance cameras and plainclothes security agents.

First a trickle and now a stream of people have been making their way there, as if on pilgrimage. At the village, they are turned back forcibly, sometimes bodily transported elsewhere, and often being beaten or robbed en route.

One person who recently made the trip is one of China's hottest young authors, Murong Xuecun, a 37-year-old whose real name is Hao Qun. It's estimated that more than 5 million people read his first book, Leave Me Alone: A Novel of Chengdu, and he has more than 1 million followers on Weibo, China's most popular Twitter-like service.

Murong went to Dongshigu with three friends, but they were forbidden to enter the village. When the author sat down outside the entrance of the village, authorities picked him up and carried him to a bus, which drove the four friends away. When they tried to return, they were attacked.

"One friend was kicked twice in the stomach," says Murong. "Another was kicked in the leg. This very violent guy knocked me over on the ground. Each of us had small injuries. But they were very gentle to us, compared to what happened to people who went before."

Such journeys are tweeted, every step of the way. Censors delete most of the tweets, but still the activity raises Chen Guangcheng's profile.

"I sent one tweet that was retweeted 11,000 times before it was deleted," says Murong. "I guess that day at least a few million people knew what we were doing."

In a speech that he was stopped from delivering after winning a Chinese literature prize last year, Murong wrote: "I am not a class enemy, I am not a troublemaker, nor an overthrower of governments. I am just a citizen who makes suggestions."

He admits he had thought of visiting Chen Guangcheng for a long time but was scared to take the step. When asked why he eventually did so, he says, "What happened to him could happen to anyone. His treatment is my treatment. So visiting him is like visiting myself."

"These past few years on microblogs, I've seen lots of people discussing the idea that the nation is not the same as the government. And the idea that being patriotic doesn't mean loving an imperial court. And that human rights are more important than sovereign rights. So Twitter serves as a tool of China's enlightenment," he says.

A couple of nights ago, netizens got close enough to set off fireworks outside Chen Guangcheng's house. They recorded it, of course, and put it online.

And the pressure exerted by these citizen activists is having an impact. In the case of imprisoned businessman Yang Jinde, a local newspaper reported that he was finally given a medical examination, which reportedly found no grounds for his claims of torture. Lawyer Zhu Mingyong tweeted his response to this, saying, "He [Yang Jinde] was carried into his medical exam, and then he was carried out of it as well. Nanyang police, why can't you make Yang Jinde stand up?"

Meanwhile, the 6-year-old daughter of lawyer Chen is, for the first time, being allowed to attend school, albeit escorted to and from classes by security agents.

These are small, qualified changes in part of a broader effort to make Yang Jinde and Chen Guangcheng household names in China, as well as overseas.