Accessibility links
Movie Review - 'Anonymous' - Stylish Claptrap By Any Other Name Could Shakespeare have been in love if he didn't even exist? Director Roland Emmerich's Elizabethan-era costume drama turns a cockamamie idea about the Bard's "real" identity into a ridiculous but handsome thriller. 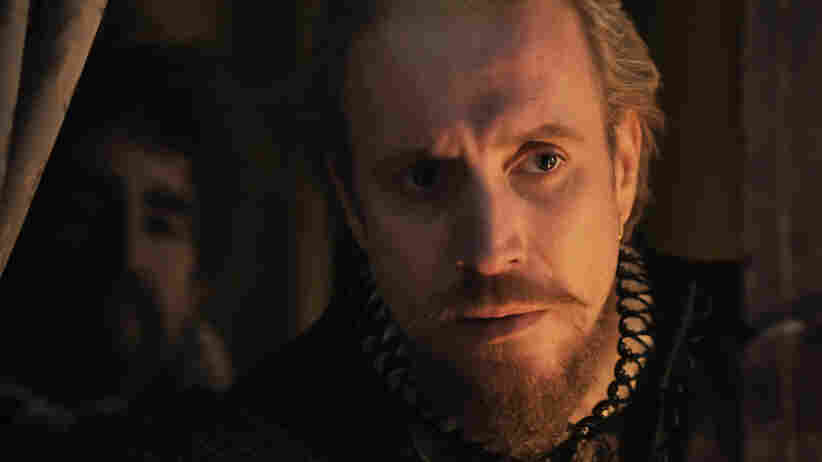 Beard of Avon? Rhys Ifans plays the 17th Earl of Oxford, who in the preposterous calculus of Anonymous is the "real" author of Shakespeare's plays.

Rated PG-13; for some violence and some sexuality content

From 'Anonymous' - 'Art Is Political'

'If Plays Are A Sin'

Did Shakespeare write Shakespeare? That is the question — at least according to Roland Emmerich's new movie Anonymous.

Personally, I went in a skeptic of the Oxfordian position, which posits that Edward de Vere, 17th Earl of Oxford, wrote the plays and poems generally attributed to Shakespeare.

But I have to concede that Anonymous raises one question of authorship pretty persuasively: I mean, what a preposterous notion ... that Roland Emmerich could've made this movie. The guy who revived Godzilla, went to war with aliens in Independence Day, and trashed the whole world in 2012. C'mon: We're supposed to believe he's suddenly concerning himself with doublets, corsets, elaborate facial hair and the intrigues of Elizabethan England? Ridiculous!

Especially when there are so many likelier director possibilities: Kenneth Branagh, for one. Or how about Laurence Olivier, who admittedly has the disadvantage of being dead.

Then again, why should that be a problem? Anonymous, after all, claims that de Vere wrote Shakespeare's plays, even though he died before about a dozen of them were produced. Youth, in screenwriter John Orloff's chronology, isn't a problem either: Witness de Vere wowing a youngish Queen Elizabeth by starring in his own Midsummer Night's Dream when he's all of 9 years old.

Elizabeth (played by Joely Richardson at this point, and later by her mom, Vanessa Redgrave), is almost 30 in that scene, but already she and young Edward sense a connection. By the time he's in his late teens (when he's played by Jamie Campbell Bower, who resembles the older Edward, played by Rhys Ifans, not at all), he and his randy virgin queen have produced an illegitimate heir who will end up — if I'm not confusing moustaches in a crowd where everyone seems to go to the same barber — as best buddy to the Earl of Essex, a guy Edward will later push as Elizabeth's successor.

He's sort of a frustrated politician, see, when he's not furiously writing plays that he hopes to fob off on some other playwright. Overcomplicated? All the best conspiracy theories are.

Enter a buffoonish, basically illiterate actor named Shakespeare (Rafe Spall), who's game to be paid as a playwright, but would really prefer to act in the plays.

Now, as silly as most of this is, Anonymous is undeniably a handsome picture. The costumes are gorgeous, with enough velvet and brocade to make everybody seem downright upholstered. Interior scenes are lush, lit to evoke 17th-century canvases, while exteriors are often breathtaking, with computer graphics allowing soaring shots over the muddy streets of a digital London. When de Vere decides to use Richard III to whip a theater audience into a political frenzy, the mob looks persuasive enough as it takes to the streets that for some viewers, it may not matter that the story's chronology doesn't work — or that none of this actually happened.

Bottom line: Grant the film's big moments a kind of loopy majesty, and note that they're better acted than they deserve to be, not just by Ifans, Redgrave and Spall, but by David Thewlis and Edward Hogg as the villainous father-son team of William and Robert Cecil. It's a classy cast.

Still, plot matters, and I'm guessing that this film's plot will prove incoherent for folks who can't identify Ben Jonson, Robert Cecil and the 2nd Earl of Essex — and it'll prove exasperating for those who can.

Also frustrating for anyone who worries that Anonymous's take on a classic like Richard III — it basically turns one of Shakespeare's tighter history plays into a mere propaganda tool — diminishes the work itself.

Y'know, the proof-demanding academic crowd — who'll no doubt spend that scene, and maybe the whole rest of the movie, muttering "A source, a source, my kingdom for a source."