Accessibility links
'Three And Out': A College Football Coach, Undone In Mythical Fashion A new book likens the reign of a football coach to a Greek tragedy — one filled with perils, flaws, and the burdens of expectations.

'Three And Out': A College Football Coach, Undone In Mythical Fashion

'Three And Out': A College Football Coach, Undone In Mythical Fashion 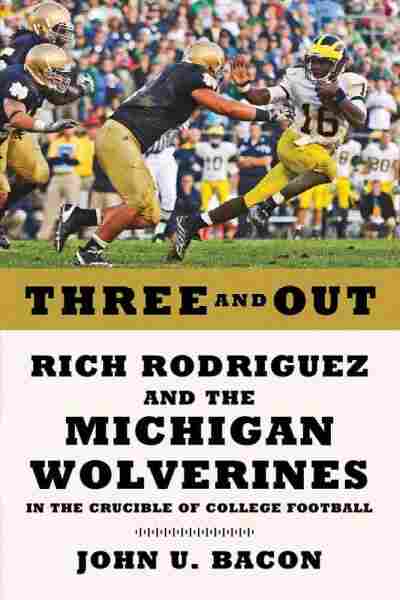 by John U. Bacon

Title
Three and Out
Subtitle
Rich Rodriguez and the Michigan Wolverines in the Crucible of College Football
Author
John U. Bacon

I never really enjoyed watching football until I had a school to root for. Yes, I know America's college football system has some problems. OK, it has a lot of problems. OK, it's a barely-concealed smokescreen for raking in billions of dollars off the backs of unpaid student labor. But nevertheless, the sport's capacity for instantaneous mythmaking remains – any given Saturday, another legend can be born. Or destroyed. Either way.

I saw legends born at the University of Michigan, but not the good kinds. I attended during the Rich Rodriguez era, which lasted from 2008 to 2010 and produced the worst three-year stretch of football in the "winningest" university's history before his unceremonious canning. As a member of the marching band, it was my job to continually cheer on the team, even when there wasn't much to cheer.

Sports historian and NPR member station correspondent John Bacon's new book, Three And Out: Rich Rodriguez and the Michigan Wolverines in the Crucible of College Football, references in its title The Crucible, by Michigan alum Arthur Miller. I'm not so sure I buy the link between a millionaire college football coach and a Salem Witch Trial victim. And anyway, given Ann Arbor's self-proclaimed reputation as "the Athens of the Midwest" (a title also claimed by fellow Big Ten towns Madison, Wisconsin and Iowa City, Iowa, although I don't think anyone's clamoring to be Athens these days), what Bacon's account resembles more than anything else is the stuff of Greek tragedy.

As with most tragedies, we already know what the end holds for our doomed general, so far from his homeland: He will produce the worst record ever seen in the 130-year-old program's history. He will meet the ire of pretty much everyone in a position to do him harm, from former employers/alma mater West Virginia University to the sports reporters at the Detroit Free Press, which published an ultimately baseless story leveling that Rodriguez was forcing his players to practice more than the NCAA allotted amount. He will walk away from his three-year Iliad a broken and defeated man.

So the focus of the narrative, then, isn't its unavoidable outcome but rather the long, fiery trek through the River Styx. Bacon casts his protagonist as a modern-day Icarus, a risk-taking schematic mind who witnesses his career crash and burn once his on-the-field results and off-the-field public persona are unable to measure up to his employer's lofty visions.

But then at times, Three And Out awkwardly exchanges its lyre for a Bible, with Bacon anointing Rodriguez the misunderstood prodigal son. The author dwells on the players and assistants – not as people, but as disciples, who hang on every word their coach says. Meanwhile, the community at large casts him out of their most sanctified inner circles because he doesn't match their vision for a "Michigan Man" (a handy catch-all nonsense term for what constitutes the university's ideal coach).

In the great pantheon of sports writing, Bacon isn't exactly H.G. Bissinger. His prose is often overwrought, reiterating the stakes at play before every game as if we'd forget what we're reading about. And after the book's fantastic opening fourth, which weaves the elite history of the school together with Rodriguez's blue-collar, coal-miner's-son background, we're left with a mostly repetitive game-drama-game structure. Bacon was embedded with Rodriguez and his team for the coach's entire Michigan tenure, and there are times when we can feel the author getting a bit too close to his subject.

There's an awful lot of name-calling and finger-pointing, too – as though Bacon simply sought to drown out the anti-Rodriguez Greek chorus. Imagine Homer continually interrupting The Odyssey by saying, "Now remember, it was all Poseidon's fault."

Yet Bacon manages to nail certain tiny details that tell the story of college football better than any win/loss record: Star quarterback Denard Robinson perplexed that ESPN would report on his latest injury, barbers in Ann Arbor spouting game-by-game analyses, rival Michigan State University coach Mark Dantonio stepping off his team bus while barking "Get away from me" at a Michigan greeter. A greater reliance on those moments, instead of keeping a running tally of all Rodriguez's ill fortunes, would have helped bring the myth of the sport down to a tangible level.

College football is a strange world – a world where, as Bacon often reiterates, glory and shame are never more than a dropped pass away from each other. But after reading Three And Out, the sense of drama is all-but-overshadowed by pervasive, unrelenting fatalism. Even failure on such a grand stage doesn't have to be quite this tragic.