Accessibility links
The 'Thriller' Dance, A Halloween Tradition "Michael contacted me and he just wanted to turn into a monster," says director John Landis. 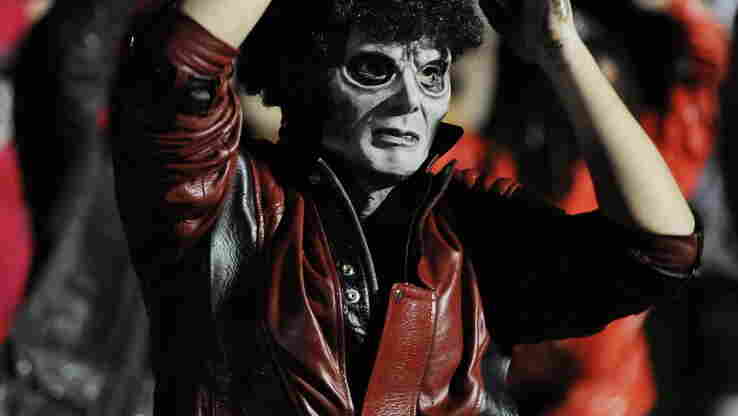 A fan dressed as Michael Jackson's zombie character participates in the 2009 "Thrill the World: A Global Tribute to Michael Jackson" in Astoria Park in the Queens section of New York. 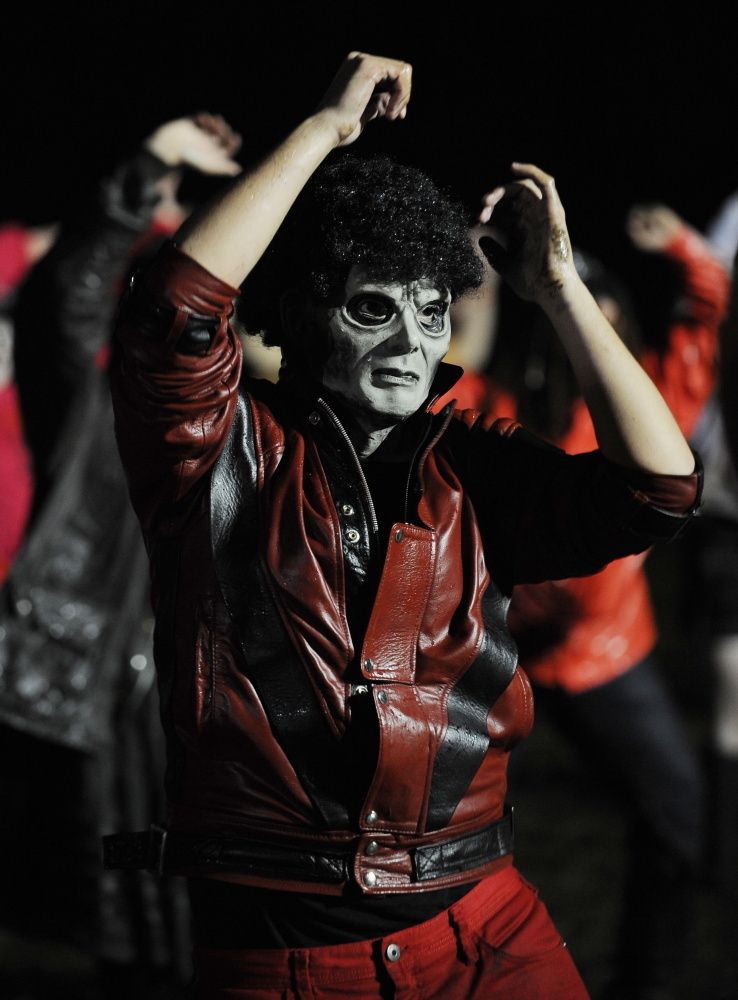 A fan dressed as Michael Jackson's zombie character participates in the 2009 "Thrill the World: A Global Tribute to Michael Jackson" in Astoria Park in the Queens section of New York.

In cities big and small this weekend, people will gather as they do every Halloween weekend, for an annual ritual. From Johnson City, Tenn., to Midland, Mich., zombies will emerge to re-enact ... the "Thriller" dance. In addition to the annual Halloween gatherings, people are still making remixes of the song. And a quick search of YouTube reveals dozens of tribute videos.

Nearly 30 years after its debut, Michael Jackson's "Thriller" is still hugely popular. To put it in context, the same-name album had been out over a year and was the No. 1 selling album of all time, and videos had been made of two of its songs ("Billie Jean" and "Beat It"). After Jackson saw An American Werewolf in London, he contacted John Landis, who had directed that movie.

"Michael contacted me and he just wanted to turn into a monster," says Landis in an interview with All Things Considered host Michele Norris. "And I thought about it and I thought, 'No, I don't want to do a rock video. They're just commercials for records.' But then I thought, 'You know what, Mike? How about a theatrical short?' And he said, 'Sure.' "

Unsurprisingly, Landis says that the dancers were not hard to come by because they all wanted to dance with Michael Jackson. But seemingly everyone wanted to be a part of history.

"Working with Michael Jackson at that time was really nuts. Fred Astaire came by, Gene Kelly came by, Jackie Kennedy came by, Marlon Brando came by, I mean, it was insane," says Landis, laughing. "They really kind of felt privileged to be working with him. At that time, Michael was 20 years old and he was wonderful and full of beans — I mean, he was great. He did everything I asked. I remember when I wrote it, I said, 'Mike, you know this line — I'm not like other guys — is gonna get a laugh.' And he said [in falsetto voice], 'Why?' 'Well, because Mike, you're not like other guys and people will laugh.' He said, 'That's OK.' I mean, he really was terrific to work with."

One thing you may not know about the theatrical version of "Thriller" is that the engineer Bruce Swedien and producer Quincy Jones wouldn't let Landis have the original tracks for the song. Landis wanted to do a "movie mix," which isn't the same audio that you would hear on an album. So cinematographer George Folsey and Landis got into Jackson's Rolls-Royce (with Jackson) and went to Studio City at 3 o'clock in the morning with a big suitcase.

"We took the reels off the racks, went out, drove across town to Todd-AO in Hollywood, duped all the tracks and then returned them," says Landis. "The whole thing took an hour. If you watch the video — people never notice that the song is 11 minutes long. It's the same original tracks totally recut and remixed. In fact, Vincent Price re-recorded the narration for me because I couldn't use the record narration because it was mixed with a synth track. Mr. Price very graciously came in and redid it."