Accessibility links
Solar Industry Looks On Bright Side At an international solar convention, companies were optimistic about their future and new products. There are certainly causes for concern in the industry — like a looming controversy over China's subsidization practices — but industry executives point to fast growth and new ideas in the market.

Solar power's image has taken a hit lately with the bankruptcy of Solyndra. The California solar panel manufacturer received more than half a billion dollars in Energy Department loan guarantees before going belly up. 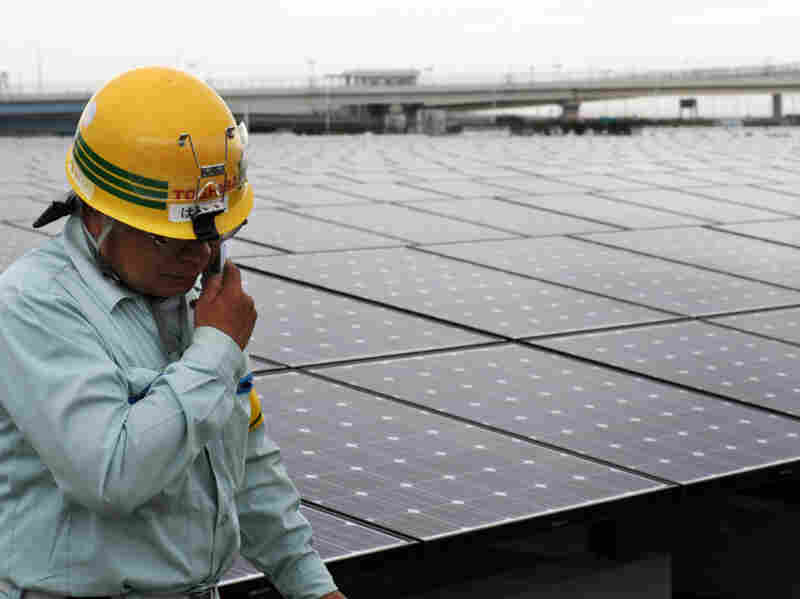 A worker stands next to an array of Sharp solar cell modules at a power plant south of Tokyo in August. Sharp was one of 1,400 solar panel manufacturers in attendance at the Solar Power International conference, where industry optimism was high. 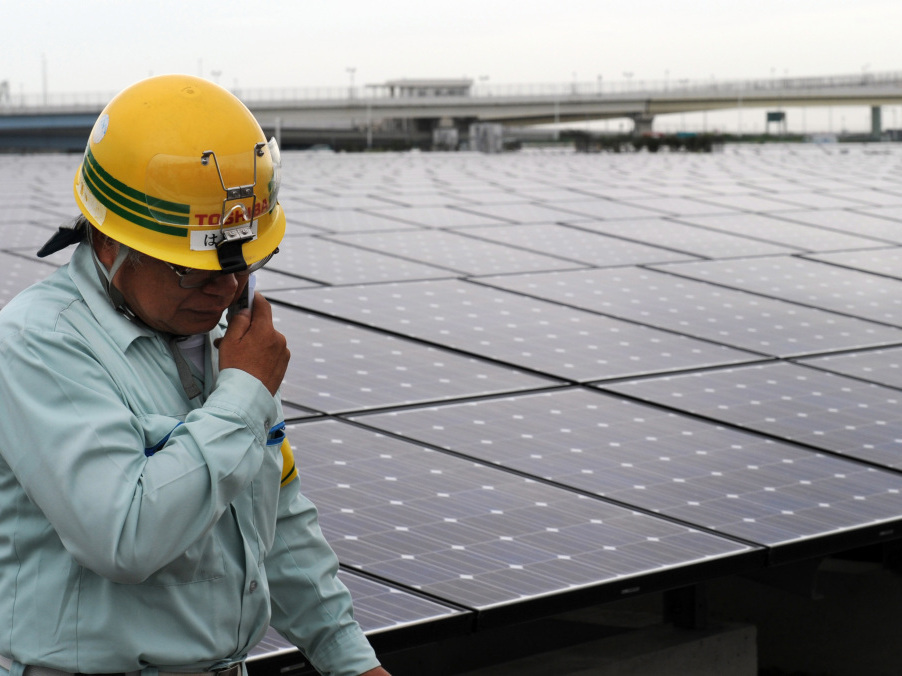 A worker stands next to an array of Sharp solar cell modules at a power plant south of Tokyo in August. Sharp was one of 1,400 solar panel manufacturers in attendance at the Solar Power International conference, where industry optimism was high.

But the industry is still optimistic — that much was apparent at the Solar Power International conference held in Dallas in mid-October. Walking into the big hall of the Dallas Convention Center, it was impossible not to be impressed by the huge array of black solar panels hanging from the ceiling.

Those were the Japanese manufacturer Sharp's new state-of-the-art panels for residential customers, and right beside them were panels from its large Chinese competitor Suntech. Next to Suntech was the elite German glass manufacturer Schott.

Salesman Matthew Kraft has his pitch ready. Schott likes to think of its panels as the Mercedes-Benz of solar panels.

"What we're looking at here is a couple of our innovations modules," Kraft explains. "You know how at car shows they always have the concept cars of what's coming down the line, or what they could be making?"

In the U.S., Schott focuses its sales on commercial rooftops, customers who might be less interested in the cheapest price than the quality of the solar panel.

"Every step of the manufacturing process, every material choice including the encapsulate, the back sheet — all have to work together well if they're going to survive 25 years and generate the electricity expected," says Tom Hecht, a top executive at Schott's U.S. division.

The displays at the conference were from China, Germany, Japan, Malaysia, Spain, Korea, Portugal — in all, 1,400 panel manufactures from 125 different countries. If you were expecting a certain level of gloom and malaise because of the negative press surrounding the Solyndra bankruptcy, there's just not much of it to be found.

With a dramatic drop in silicon prices, solar panel prices have come down 50 percent and business is good.

But not everything is coming up roses. Last week a group of seven U.S. solar panel manufacturers filed petitions with the Commerce Department and the International Trade Commission alleging that China is illegally subsidizing its solar industry and flooding the worldwide market with underpriced panels to drive weaker competitors bankrupt.

Resch wants an investigation. "I think the jury's still out, but this case at least will be a very transparent process in which the information will be gathered, and the courts will be able to decide whether the Chinese have been unfairly subsidizing their industry or not," he says.

But the manufacturers' petition has split the solar industry because the lower panel prices have been a boon to solar developers and installers. For them, lower prices mean more customers.

New Ideas In The Market

Still, in this economy, laying out $35,000 is asking a lot of a residential customer, so some in the industry are taking a page out of Dish Network's playbook and renting the necessary equipment to residential customers. That means there's no money down.

Sharp, on the other hand, is attacking the financing issue through technology. Its new residential panels each come with their own inverter. Sharp Senior Vice President Eric Hafter explains the significance of the development.

"The inverter is matched with the panel so each panel is actually producing AC power, which goes straight into the home. It's also set up so that you can install as [little] as one panel and then add to the system over years," Hafter says.

Hafter says there is no question that U.S. manufacturers can compete, and points out that the cheapest solar panel currently on the market is made by an American company, not a Chinese one.

Regardless, there's going to be a lot of product in the market going forward, prices are expected to remain fiercely competitive, and the industry predicts robust growth for this coming year at 60 percent.