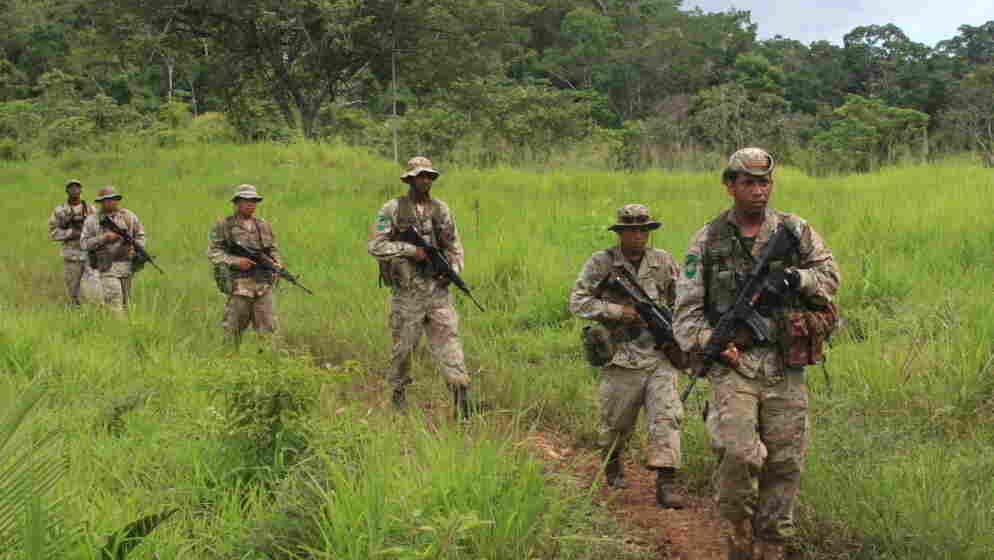 Special forces troops in Belize march through jungle looking for any sign of marijuana or drug smugglers. Drug traffickers have become increasingly active in Belize and other small nations in Central America.

A couple of decades ago, Colombian drug cartels dominated smuggling operations into the United States. In recent years, the Mexican cartels have taken over.

But Mexico's brutal drug war over the past five years is now pushing some of the drug trade into the smaller, weaker nations of Central America. And the traffickers are increasingly active in the region's least-populated and most vulnerable country, Belize.

On a bad road near Belize's disputed border with Guatemala, a team of eight Belizean special forces troops rumbled through the jungle in a huge Ford F-350 pickup. The truck was a donation from the U.S. government. But it was Belizean soca music and dancehall tunes that were playing on the local station, LOVE-FM.

This Belizean counter-drug patrol was heading into an area where troops exchanged fire with alleged cartel gunmen a few weeks earlier. Suspected drug flights bringing South American cocaine have also been spotted landing in the area. But Belize's military has no radar, no helicopters, and lacks even a reliable communications system.

The brand-new pickup truck soon ran into trouble, bouncing and fishtailing up the trail until it became stuck in the mud. At that point, the patrol continued on foot up the hot, swampy trail, with iridescent blue morpho butterflies floating by. The soldiers walked without a word.

We are still sleeping, where everyone else is fighting for their lives on all our fronts. The threat is overwhelming, in that our country could be simply overrun in a very short instant.

Capt. Ian Cunha, a military commander in Belize, on the threat drug smuggling poses to his country

At the sound of someone approaching on the trail, they crouched down in the foliage, rifles ready. On this day, there were only farmers and their sad-faced burros on the trail, and the cargo was corn.

Sgt. Marcos Villagran, the patrol unit's tall, lean commander, wore a floppy bucket hat and carried a shiny American M-4 rifle, another U.S. donation. He says farmers from the Guatemalan side have been coming over and clearing protected forests.

"Because they think the land they live on is Guatemalan, they come and they destroy our forest," he said. "There are times within 1 square kilometer you will find 30, 30-odd trees, all different types of logwood, cut down."

Some farmers plant corn and beans. Others grow marijuana and carve messages into the trees for the soldiers like, "We are watching you," signing them with a "Z," for Mexico's Zetas drug cartel.

Belize is the size of Massachusetts but has just 320,000 people. Its jungles, long Caribbean coastline, and hundreds of uninhabited islands make it an ideal entry point for smugglers' flights and powerful fast boats racing north toward the U.S.

"Many Belizeans look at the drug transshipment problem as not our problem," he said. "They look at it as a problem for the Americans or the Mexicans or somebody else. But I think we certainly are shortsighted in doing so. Because if we look at the Mexican experience, the impact of transshipment, being a country along that route makes us extremely vulnerable."

Belize has not had the kind of brutal cartel violence now tearing apart Mexico and pushing into Guatemala next door. But drug-fueled gang killings are soaring in gritty Belize City.

"The criminals have gotten so brazen that actually, just some months ago, they attacked a police station," said Russell Vellos, editor of Amandala, the country's largest newspaper. "In the past that was unheard of, attacking a police station. You crazy? But this is what has happened. Then what's next? What are you afraid to do next? Nothing."

The U.S. has given Belize about $15 million in security aid in recent years, mostly vehicles, equipment and training. It's a sliver of the roughly $600 million in drug war funding that has been provided or promised so far to Central America, whose governments are considered especially vulnerable to the corrupting powers of Mexico's wealthy crime gangs.

"We are still sleeping, where everyone else is fighting for their lives on all our fronts," said Capt. Ian Cunha, a Belizean military commander along the Guatemala border. "The threat is overwhelming, in that our country could be simply overrun in a very short instant."

On this particular day, the special forces soldiers patrolling near the border didn't find any Zetas or pot fields. In addition, they were unable to make radio contact with the other patrol unit they were supposed to meet up with. So they walked back down the mountain, got in the truck and cranked up the pop tunes for the long ride home.

This story was supported by the Pulitzer Center on Crisis Reporting.