Accessibility links
Actor Alan Alda Plays 'Not My Job' We've invited Alda to play a game called "You're the Assistant Keeper of the Royal Privy": three questions about what goes on behind the scenes at Buckingham Palace. 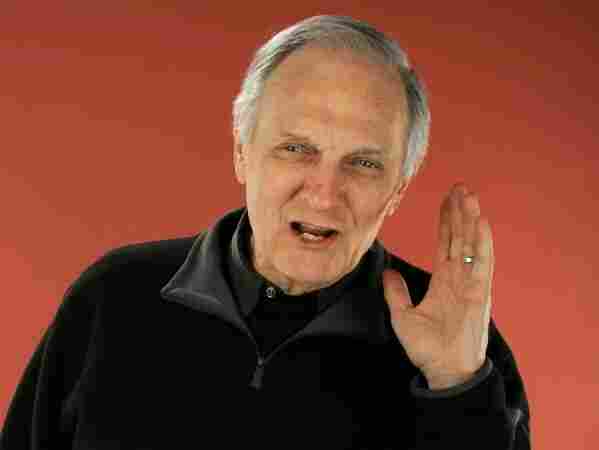 You know Alan Alda as an actor — most famously as Hawkeye Pierce in the classic TV comedy M*A*S*H — but now he's making his debut as a professional playwright, and we've invited him on to break the news that the lead actress never goes out with the writer.

He's also here to play a game called "You're the Assistant Keeper of the Royal Privy." We know a fair amount about the queen of England — for example, she is rarely amused — but we didn't know much about the people who serve the British royal household ... until now. A new book, Not In Front of the Corgis, details life behind the scenes in the monarchy.

PETER SAGAL, host: And now, the game where we invite people we like to answer questions about things they don't care about.

SAGAL: You know Alan Alda as an actor, most famously as Hawkeye Pierce, in the classic comedy "MASH," but now he's making his debut as a professional playwright. We've invited him on to break the news to him that the lead actress never goes out with the writer. Alan Alda, welcome back to WAIT WAIT...DON'T TELL ME! Great to hear from you.

ALAN ALDA: Thank you so much.

SAGAL: Great to have you.

SAGAL: So, you've written a play. We understand it's about Marie Curie.

SAGAL: Well how did you come to write a play about Marie Curie?

ALDA: Well, I help put on the World's Science Festival every year in New York, and I thought, about four years ago, it would be fun to do an evening where actors read the letters of Marie Curie. And I found out that all her letters are in the National Library in Paris, but they're still radioactive.

SAGAL: Really? Can they be read?

ALDA: Well, yeah, you don't even need to turn a lamp on.

SAGAL: So, I mean, am I right in that this is your professional - I mean, you've done so many things, but this is the first time you've written a professionally produced play?

ALDA: Well, I think I could actually say I wrote my first play when I was eight years old.

ALDA: Watching, actually watching from the wings gave me a lifelong interest.

SAGAL: In what, Alan?

ALDA: So I wrote, the first thing I wrote was a courtroom sketch with a comedian judge, you know.

ALDA: Just like in burlesque. And I'm still writing now just like that, only now they have more clothes on.

SAGAL: And I love this, because if I understand the plot, it's there's sort of a Bernie Madoff type character, this wealthy guy who rips off all the workers in his building through some sort of Ponzi scheme.

SAGAL: And they have their vengeance and that's the plot of the movie.

ALDA: Do you have a problem with that?

SAGAL: But I love the fact - because I'm the guy who grew up watching you play Hawkeye Pierce on "MASH," the nicest guy in the Korean War.

SAGAL: I love the fact that when the producer of this movie said who are we going to get to play this hateful, scheming, awful person, the hatred of whom motivates every other character in the movie - I know, Alan Alda.

ALDA: You can't play these characters unless you see the world from their point of view. And I really don't know what everybody's problem is with this. I stole a couple of hundred million dollars, what is that, a crime?

SAGAL: We understand, and it's interesting, again, talking to you about playing villains because we understand you have a reputation, kind of always had a reputation of being a genuinely nice guy. And...

ALDA: Yeah, I don't have to take this kind of talk from you.

SAGAL: I understand. All right, destroy that reputation right now for good.

SAGAL: What is the worst thing that you, Alan Alda, have done?

ALDA: When I was about ten years old, I gave my teacher an April Fool's sandwich, which had a dead goldfish in it.

ALDA: And he had just caught me drawing a picture of a naked girl.

ALDA: So he wrestled it out of my hand, and I was really pissed at him.

ALDA: I first behaved nicely to him.

ALDA: And I said, open the sandwich, because I thought he'd see it and laugh. He said, no, no, and he took a bite and he's sitting there with the tail of the fish hanging out of his mouth.

ALDA: And I think to myself, should I warn him or let him die?

SAGAL: And what did you do?

ALDA: I let him die.

SAGAL: That'll show him. And how do you feel about it now, this many years later?

ALDA: Oh, I'd let him die all over again.

SAGAL: Well, Alan Alda, it's a thrill to talk to you always. This time, we've asked you here to play a game that we're calling?

CARL KASELL, host: You are the assistant keeper of the royal privy.

SAGAL: We know a fair amount about the Queen of England. For example, she is rarely amused. But we don't know much about the people who serve the British royal household, until now. A new book called, "Not in Front of the Corgies," details life behind the scenes in the monarchy. Answer two out of three questions about the royal household, you'll win a prize for one of our listeners. Carl, who is Alan Alda playing for?

KASELL: He is playing for Rebecca and Michael Wigginton of Indianapolis.

SAGAL: That's going to help, I know. Here's your first question. Which of these is a real duty carried out dutifully by one of Prince Charles' valets, as they say over there? A: Ironing the Prince's shoelaces? B: Flossing the Prince's teeth? Or C: Carrying the Prince's teddy bear at all times?

ALDA: I think it's his shoelaces.

SAGAL: So, the next time you meet the Prince of Wales, look down. The next question, the household staff at Buckingham Palace are famed for their attention to detail. Before the President and Mrs. Obama visited in May, inquiries were made as to the First Family's preference in what? A: Style of toilet paper? B: Thread count in sheets? Or C: Late night mood music?

ALDA: I think the question they'd be least embarrassed and least stupid to ask would be the mood music.

ALDA: Yeah, that's what I think.

ALDA: What is that? Is that a hint? Really?

SAGAL: No, I'm just thinking of like, your logic is interesting, that's the least embarrassing thing to ask.

BABYLON: Besides, you know it's Barry White.

SAGAL: Is that your final choice, late night mood music?

SAGAL: This happened last time. You're this nice guy who comes on our show and you end up swearing. I guess we're the exception.

SAGAL: No, actually, the answer was style of toilet paper. They actually inquired, before the President's visit, as to the First Family's preference in, quote, "Thickness, consistency and color of toilet paper."

Last question. The work in the royal household is not for everyone. On at least one occasion, a royal servant had to perform which of these delicate tasks? A: Picking out food debris from the mustache of Prince Philip? B: Making secret late night Marmite runs for Sarah Ferguson? Or C: Lubricating the trousers of the Earl of Mountbatten?

ALDA: I have to tell you I'm stunned by those choices.

SAGAL: I know, they're good ones.

ALDA: Could you just get a little bit more in detail about why you would lubricate somebody's trousers?

SAGAL: Well, perhaps they were very tight trousers and they were very difficult to get on, particularly if your Earl or Duke has gotten on in years, enjoyed the little, you know, Yorkshire puddings a little bit much, and might need a little help and maybe even a little slippery stuff to get them on.

BABYLON: What would you lubricate them with?

ALDA: I mean, is he trying to get into them or out of them?

SAGAL: In fact, probably, as it might happen, you might need help if you were the Earl of Mountbatten, trying to get into the ceremonial pants. You might need...

SAGAL: I didn't mean that, Alan. Trying to get into your own ceremonial pants.

SAGAL: You might need a little lubrication on the way in and a little help from the valet or the footman on the way out. As would we all, were we the Earl of Mountbatten.

ALDA: I can't remember the other two.

ALDA: What the hell does that mean?

SAGAL: Under this theory...

ROBERTS: It is not.

ALDA: Or something that you spread on bread?

BABYLON: It's in the weasel family.

ROBERTS: It is not tasty.

SAGAL: Well, some people think it is a tasty yeast spread that they enjoy there in Britain. So, presumably, Sarah Ferguson, as we know, can get a little pickish of an evening. So presumably, she would ask her servant to run out and grab her some Marmite without telling everyone.

ALDA: See, that's why I had no chance here. I thought that was a marmoset you were talking about.

SAGAL: Get me a marmoset.

ALDA: And I thought what the hell does she need with a rodent in the middle of the night?

SAGAL: That is a good question. Maybe you can write that one off.

ALDA: We're back to the lubricated pants.

ALDA: I'm going to go with the marmoset.

SAGAL: You're going to go with Sarah Ferguson going out and getting some sort of rodent in the middle of the night?

SAGAL: Have you ever tasted Marmite?

ALDA: No, I thought it was a thing, an animal.

SAGAL: No, it's not an animal. It's this terrible tasting yeast spread.

ALDA: Okay, so Sarah Ferguson had a yeast problem in the middle of the night.

ALDA: And the other guy had lubricated pants. This all adds up.

SAGAL: So, food debris from the mustache, Marmite, lubricated pants.

ALDA: It's the pants.

(SOUNDBITE OF APPLAUSE) Some people. In fact, the Earl of Mountbatten had difficulty getting into these very snug breeches, a costume for a royal parade. So the valet applied talcum powder was the lubricant, which allowed him to slide right in. And then after the parade, he had to peel them right off.

SAGAL: Carl, how did Alan Alda do?

KASELL: It took a bit, Peter, but he finally got two correct answers.

KASELL: So that means Alan wins for Rebecca and Michael Wigginton.

SAGAL: Alan Alda's play "Radiance: The Passion of Marie Curie" opens at the Geffen Playhouse in Los Angeles on November 1st. You can also see Alan Alda in the movie "Tower Heist" opening next weekend. Alan Alda, thank you so much for being with us. Great to see you again.

ALDA: Thanks very much.